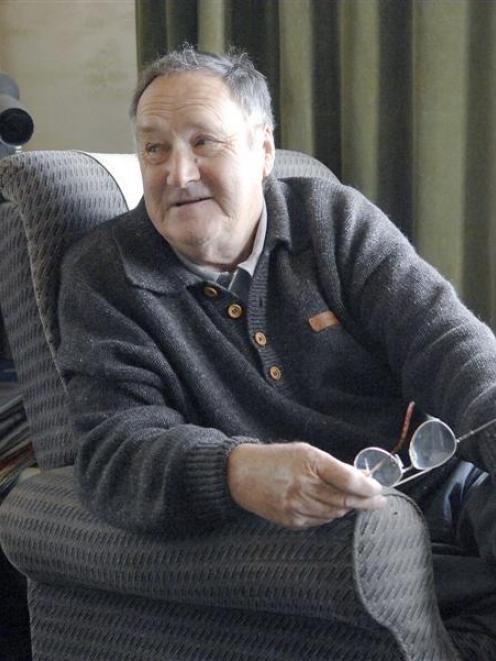 Peter Marshall has found new places to belong. Photo by Linda Robertson.
Imagine growing up as Pakeha then learning on your 50th birthday you were Maori. Waitangi weekend is a time of personal reflection for some. Nigel Benson talks to Peter Marshall.

"I am a kaumatua. My marae is Moeraki and I meet with my iwi monthly."

So, begins Peter Marshall (77) about his extraordinary life.

"My unmarried mother gave birth to me. I was given my mother's maiden name and my birth certificate was John Francis Donaldson," he says.

"My name is now Peter. Well, Peter Scott Marshall, to be correct.

"My birth certificate has just got 'Roslyn, Dunedin' on it. In those days there were birthing places up in Roslyn. That was the Depression. It was the '30s and a pregnant lady in the '30s had a difficult time ahead of her. It was a different time in the '30s. It was a lot different to today, with people living together and things."

Mr Marshall's succinct description of another time provides an explanation for the decades he spent in the dark about his identity, an identity that means he now dwells comfortably in two worlds.

The lounge-room walls in Mr Marshall's Helensburgh home are a photographic shrine to family members. His late wife Peggy's ashes have occupied the front room since 2004.

But, he has no photographs from his own childhood. The earliest picture he can dig up of himself is when he was aged about 30.

"Sometimes, I feel disappointed that I haven't got all these photos, like other people have got," Mr Marshall says.

"One of my earliest memories was about four years of age, lying in a bed in a big room with other boys. Later in life, I realised it must have been the Catholic Boys Home, in Waverley, Dunedin. I can't remember anything before that," he says.

"My next memory starts with my first day going to school at Andersons Bay. It was not one of my better days. I came from the boys home, so on the first day at school they beat me up. They all jumped on top of me and pummelled me. You can understand why. They saw me in my new clothes and were jealous, I suppose.

"After that, I was taken away from Andy Bay School and taken to Tainui."

They were the only schools Mr Marshall attended.

But, he recalls a contented childhood.

"My father, as I knew him, was a Southland farmer who served at Gallipoli. Mum and Dad got married in England and then returned to Dunedin," he says.

"After talking to older family members later in life, I learned that I had lived in Waianakarua and the City Hotel when I was a child, but I don't remember any of that. I just can't remember.

"My cobbers used to say I didn't look like Mum and Dad. I was quite tall and Mum and Dad were short. But, you just didn't think about it. I had a happy childhood and Mum and Dad couldn't have been better."

Half a century later, he would learn that he had been adopted as an infant by Jack and Peggy Marshall.

"At my 50th birthday, with my wife and three children, my son Richard said he would like a family tree. Well, I thought I knew the family tree. But, as it turned out, I was wrong," he muses.

"That's when it all went to pot. My parents, who I thought were my parents, weren't my parents at all. It was a shock and it did hit hard, as my second [Maori] family came to be known.

"I was stunned. But I settled down after a while. Then my wife started looking around, because she was into genealogy. And it all came out. It all came out."

Mr Marshall has met his Maori birth mother Eileen Donaldson only once, 15 years ago.

He is related to prominent Ngai Tahu leader Sir Tipene O'Regan, so shares a connection to Codfish Island, as well as early Irish settlers.

His birth father was Pakeha.

"I never met my father. I was told he was a traffic cop. Apparently, he was very 'conscientious'. I heard a story once about how someone had dragged him off Mt Cargill Rd and dropped him in a horse trough. There always used to be horse troughs around in those days and that one is still there, up on the hill just before you get down to Waitati."

After leaving school, Mr Marshall started working as an apprentice printer in 1947 at Argent Packaging Products, in Vogel St, which was a subsidiary of confectionery manufacturer Mackintosh Caley Phoenix.

"I worked for 33 years as a printer. I also worked part-time on the wharf, as what they called a 'seagull'. I made more money from that part-time job than I did at my full-time printer's job," Mr Marshall chuckles.

"I finished up in the printing industry when everything was starting to change. So I joined the Dunedin City Council buses and worked for my last 12 years as a bus driver."

Mr Marshall married his late wife Peggy in 1955 and they had three children; Cheryl, Jillian and Richard.

She was buried at the urupa (cemetery or burial place) at the Moeraki marae.

"After Jillian died, that was when I went back. I'd found my roots. I suppose it's just something you feel you've got to do. It's natural. It's something in your body and mind that makes you go back," he says.

"I stood up and I said: 'My name's Peter Marshall, but I was born John Donaldson. I was adopted. I'm probably not the only one here who was adopted. There must be other Maoris out there that have got two sets of parents'.

"They all just looked at me and smiled."

Mr Marshall is a now a kaumatua [elder] at Te Runanga o Moeraki.

"I meet with my iwi monthly. It's my second home. You've got friends and family on all the maraes. Although, they'll often speak in Maori and I haven't got a bloody clue what's being said," he laughs.

"I'm too old now to learn the language.

"But, I'm proud to be Maori and I've been really embraced by the marae.

"Going back to Moeraki after losing my family, I found a sister, two brothers and more cousins. I've lost the old ones I know and I've got a new family now. My new iwi. From the old ones to the young ones . . . they're my family now."

"We all know what the Treaty of Waitangi means to us," he says.

"The Waitangi Day celebration is down at the Bluff marae this weekend. It's 10 years since the signing of the [Ngai Tahu claim] settlement. Ngai Tahu have done well with the money they've received and turned it into assets and property. They're the second-biggest property owner in the South Island now. The young ones will benefit in years to come.

"I'll be buried on the Moeraki marae beside Jillian one day. Peg's ashes will go in with me and we can all be together again."