Harbourside, and the living is easy 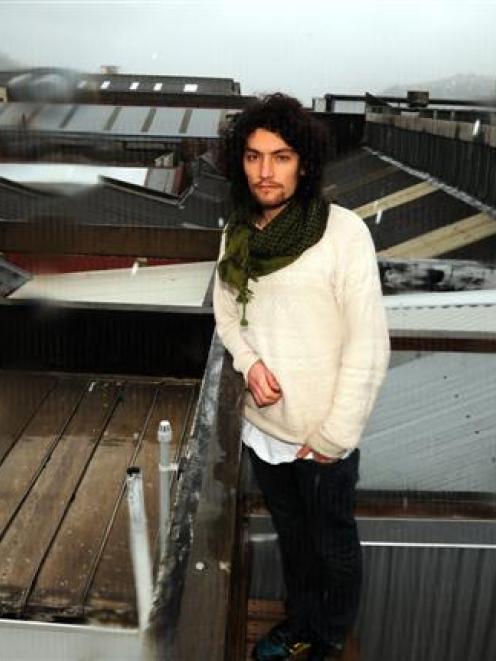 Adam Parata's view from the deck of his harbourside flat is rooftops rather than water.
As city leaders debate the merits of allowing housing at Dunedin's harbourside, the few people who already live there watch with interest. They talk to Kim Dungey about living in an area dominated by industry.

A quiet whoosh can be heard.

The view is rooftops and railings.

Except for the occasional truck and courier van, the wide streets seem deserted.

It's not exactly how you would imagine harbourside living.

In most places, you have to crane your neck to get even a glimpse of the water.

But those living near Dunedin's waterfront like the low-key surroundings that are handy to the city centre.

Tucked in between glaziers, joiners and auto-wreckers, they enjoy large warehouses and low rents.

"We always have friends asking if they can move in," says one, who does not want to be named for fear of being evicted - the area is zoned industrial and residents are not allowed there as of right.

A quick check revealed at least eight flats already in the industrial area, but even people there legally feel uncertain.

For the past three years, Adam Parata has shared a flat between Fryatt and Willis Sts with four others.

Landlord Craig Ross recently gained resource consent for this and an adjacent flat, both operating since 2002.

However, the second one cannot be let until he does about $6000 worth of secondary glazing.

Mr Parata says there is a perception the area is unlivable because of noise but it is surprisingly peaceful, especially after neighbouring workers have gone home for the night.

"The loudest thing we have here is the seagulls in the morning."

"There's kind of an ambient hum when you're in the bathroom . . . but that's the only place you can hear anything, and only during working hours."

Casey Teat, who recently returned from Wellington for a second stint in the flat, agrees: "I've been here three years and if noise was a problem, I would have left."

The pair add that because the area is "across the other side of the railway tracks", many think it is further from the city centre than it really is.

Before an accident put the Dunedin Railway Station footbridge out of action, it took them under 10 minutes to walk to the Octagon.

"A lot of people haven't ever thought of living here. There are designated areas you live in and they think inside those areas."

A warehouse environment appeals to the 26-year-olds, one an artist, the other a freelance designer.

Especially since it includes spacious living areas, a studio (for painting) and a north-facing balcony.

One day they might hanker for a house and garden, but not right now.

Mail is delivered to the door.

The landlord collects their rubbish weekly.

"We've got everything - even off-street parking," Mr Parata says.

"There's nothing negative about living here."

Across the basin, Brian Wood stands on his balcony above Plato Restaurant and echoes their sentiments.

"I can walk to art school, art galleries, movies and cafés. It's what town has to offer as well that makes it a great location."

Mr Wood owns a car but seldom uses it during the week, saving on parking costs and petrol.

He never has collectors knocking on his door and once the Birch St restaurant has closed, not much happens.

His two-bedroom flat is just above Plato, where he works two nights a week.

He adds his rubbish to the restaurant 's and uses a post office box for his mail.

Downsides are dust and noise.

Grime wafts into his flat when he leaves windows open and, being near the railway line and Jetty St overbridge, the sound of cars and trains - especially shunting activities at night - sometimes wakes him.

However, the noise is a small sacrifice for the benefits, he says, and the hum can even be "energising".

"The traffic starts about 7am. It's like an alarm clock, but I'm used to it now."

"I try to hang my smalls behind a towel or a sheet," he laughs.

"Otherwise, you're exposed to the world."

With no neighbours, he can make as much noise as he wants.

Like Mr Parata, Brian Wood thinks neighbours do not have as much contact as they used to anyway and he would not want to live in suburbia.

"If I wasn't here, I'd probably be living somewhere like Seacliff."

The 33-year-old arts student, who has also lived in a Wellington warehouse and in the centre of Melbourne, says it is not unusual for people around the world to reside in dockside areas.

"In a lot of cities, it's been happening for hundreds of years."

It is not even uncommon for people to live in the building he occupies.

Built in the 1960s, it was designed for sailors on shore leave.

Property investor Craig Ross (40) says industrial and residential may not be the ideal mix, but he has proved it can work.

In six years, he has never had a problem tenanting his Fryatt St flats and, perhaps because they are at least 30m from the road, has never had a noise complaint from his tenants or neighbouring businesses.

Like local residents, he has some sympathy for businesses that might be forced to relocate under the city council's development plan.

However, he says most around Steamer Basin do not have to be on the water's edge and if the space is needed for shops, accommodation, bars and cafés, they would be better to eventually move one or two blocks away.

"Sure, the other people there have got to protect their uses, but to turn [the proposed redevelopment] down and not do anything is silly because we might not get another opportunity like this for a long time.

"The area's being wasted. Plus it's an eyesore."

Brian Wood hopes creative, energetic people will improve the area by buying buildings and doing them up.

But ironically, the sort of development being proposed may jeopardise what brought residents here in the first place - cheap rents, spacious rooms and the ability to live in relative anonymity.

One resident of two and a-half years - the same man who did not want to be named earlier - bemoans the fact that in Auckland and Wellington, waterfront warehouses have been replaced by apartment blocks.

"The old character is good. But people see they can make a quick buck by putting up a four-storey building with four residences on each floor, where before there were only one or two."

Adam Parata sees the harbourside plan as positive but he, too, recognises that his peaceful lifestyle owes something to the fact the area is undeveloped as far as residential use is concerned.

"For us, it's in the honeymoon stages."