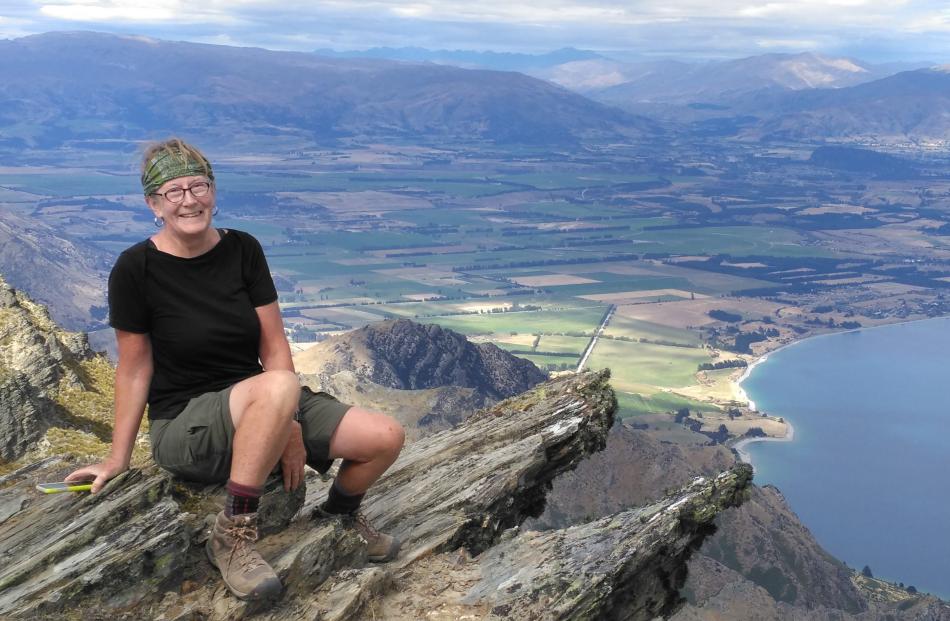 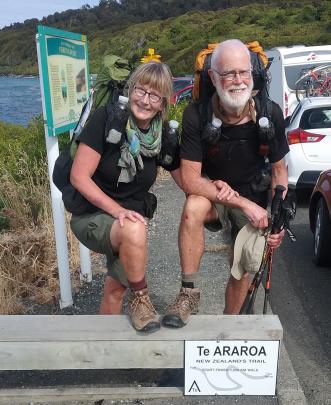 Keitha and Warwick Ross enjoy the sense of completion. 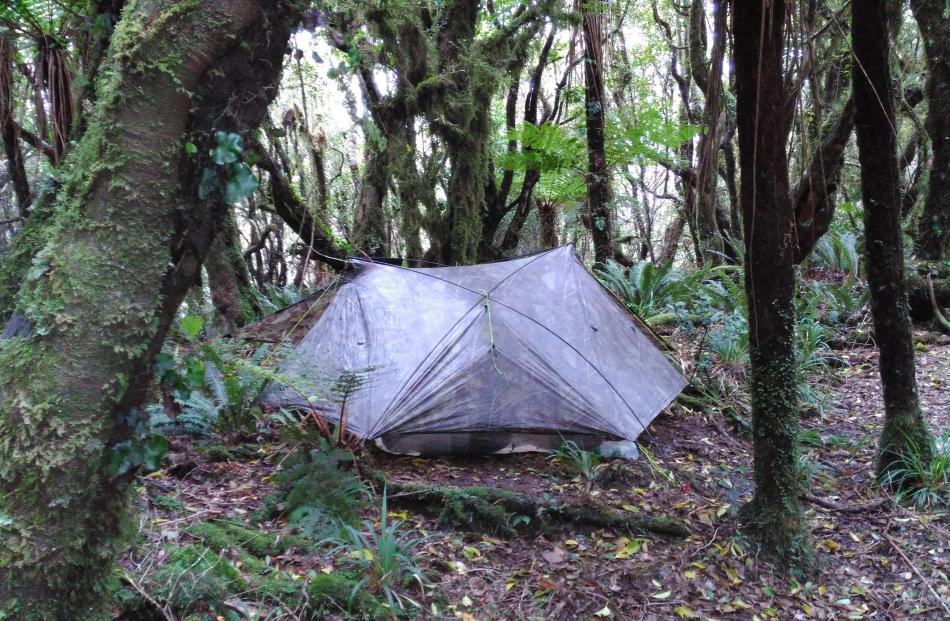 Camp in the northern Tararuas. 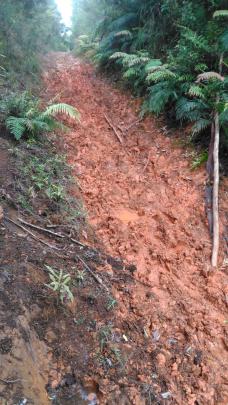 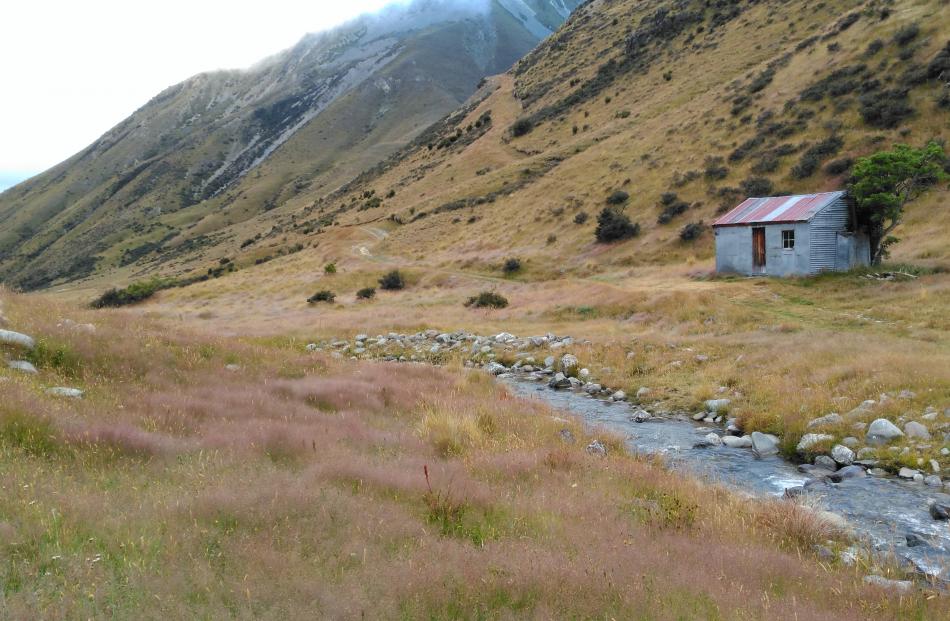 A tin hut south of the Ahuriri River. Photo: supplied. 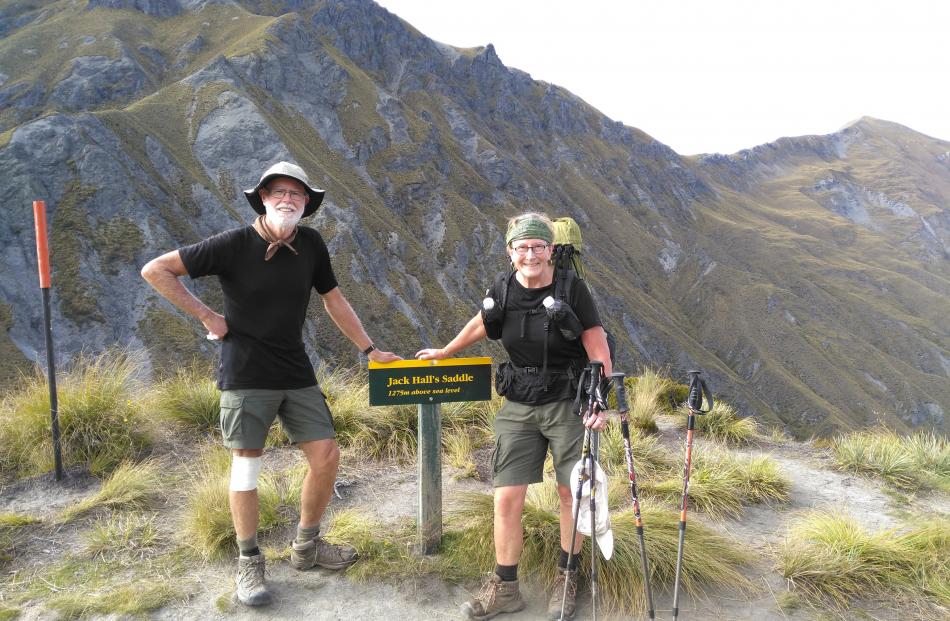 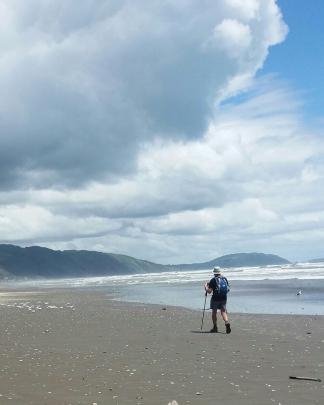 The Te Araroa trail proved  the challenge of a lifetime for a Dunedin couple in their mid-60s, discovers Viv Milsom.

They walked, scrambled, slogged, paddled and biked the length of the country to complete Te Araroa, New Zealand’s Long Trail.

And long it is. At 3000km, Te Araroa, (The Long Pathway) is one of the longest of the world’s long trails. The Pennine Way in the UK, for example is only 467km, while El Camino de Santiago in Spain  is 780km.

So what inspired Dunedin couple Warwick and Keitha Ross to take on the challenge of Te Araroa?

Warwick was the keen one at first. He heard of it in 2012 and just wanted to do it.

"I wanted a better sense of what this country is like," he said.

Keitha added wryly that she "took several years to come on board".

"We finally started in mid-September last year and finished six months later on our 45th wedding anniversary," she says.

"But we took two weeks out for the birth of a grandchild, and another two weeks off over Christmas."

So all up they walked for 105 days, paddled for three days and biked for four days. No mean feat for a couple in their mid-60s. Warwick (67) and Keitha (65) believe they may well be the oldest couple to complete Te Araroa.

"The other walkers we met on the trail were mostly younger people, about a third from North America and another third from Europe. We met very few other Kiwis doing the trail."

This lack of Kiwis walking The Long Pathway may well be because it  remains something of a mystery to most New Zealanders.

Although the idea of a trail running the length of the country goes back to the mid-1970s, it was not until the mid-1990s that New Zealand journalist Geoff Chapple, with support from his editor, Jenny Wheeler, and Waitakere City mayor Bob Harvey, established the Te Araroa Trust (TAT). A year later, the first linking track, from Kerikeri to Waitangi, was opened by then Prime Minister Jim Bolger and with front-page treatment in The New Zealand Herald, the concept of The Long Pathway began to capture the country’s attention.

But it would be another 16 years before Te Araroa became a reality. With Doc, regional and local council support, as well as financial support from first, Helen Clark’s Labour government, and later John Key’s National government, as well as what has been one of New Zealand’s greatest volunteer efforts, the construction of the major linking tracks was finally completed, and New Zealand’s Long Trail was officially opened in 2011. Utilising 113 existing longer tramps and day walks from Cape Reinga to Bluff, walkers have many opportunities to enjoy just a section of Te Araroa.

Walkers completing all of Te Araroa though, usually opt to start at Cape Reinga and walk from north to south, and while some decide to walk EFI (every ... inch), Warwick and Keitha preferred to "hike their own hike". And so after several years of planning and training, which included 10km walks every Sunday morning, the couple set off from Cape Reinga with mixed feelings.

"We felt ecstatic to be starting, but also a little anxious."

It took them four and a-half days to walk down Ninety Mile Beach, which is actually only 88km long.

"There was a lot going on and so much to see,"  Keitha said.

"It was spring, so there were baby birds and animals, and it wasn’t hard going, although a reasonable number of walkers don’t complete Ninety Mile Beach."

Te Araroa then led them into Northland forest.

"We’d planned to walk about 20km a day, but our ‘itinerary’ was blown apart in the first few days. We had to learn to live with uncertainty. On Mt Pirongia in the Waikato we had to slog through knee-deep mud and Keitha broke two poles. We only covered 6km in five hours that day. But other days we might walk 25km, sometimes 30km."

Keitha was not as fast as Warwick, and found the walk a "huge physical challenge".  But she learnt to trust her body and found her energy could take her a long way. At times Warwick would go ahead, but always with safety in mind. They had three rules: be safe, be kind, be open. After 45 years of marriage there was not a lot more they could learn about each other, but the challenges of Te Araroa have enriched their relationship.

"We enjoyed quality time and were more conscious of our relationship — we had to be." Keitha said.

And both  now have a deeper respect for each other’s resilience, patience and capacity to endure when things get tough.

Keitha’s first fall happened in Warkworth, after they had walked about 500km.

"I tripped over a drain at a garden edge and ended up with two black eyes, a cut face and an egg on my head."

She fell again walking on the Pelorus River Track, near the Marlborough Sounds, this time tearing a tendon in her shoulder. Luckily though, she could still use her poles, and so was able to continue walking. Much further south on the Motatapu Track, near Wanaka, it was Warwick’s turn.

First a  knee gave out, then only 1km from Bluff he tripped on Keitha’s walking pole and fell, injuring his knee further and tearing skin on his face. Given his injuries, they decided to avoid the rough and muddy Longwood Forest Track in Southland and instead walked along country roads down to the coast. On the final day they walked just 10km.

"We were very excited and upbeat, but also feeling a bit sad, too. Then my sister and her husband from Christchurch appeared unexpectedly to meet us, and that was an emotional moment for us," Keitha said.

All through the country, various family members and friends  offered them support and hospitality.

"We usually walked for about five days before having one or more zero days," Keitha said, "and often on these rest days we stayed with either family or friends. We also received unexpected kindness all along  the trail."

Warwick carried a lightweight tent, but because of the  wet spring and summer they only spent about 30 nights camping out. Often there were huts to stay in but they also stayed in an old shearing shed, people’s garages, cabins and motels, and in Southland they treated themselves to two nights in country pubs. Warwick said, adopting a "hike your own hike" philosophy allowed them some  freedom.

"We were not too precious about it."

Hence they took time out first when a new grandchild was born and again over Christmas.

"We took two weeks off both times and while going back was physically OK, it was hard leaving home and the grandkids," Warwick said.

They avoided tracks they had already  walked, such as The Tongariro Crossing, and abandoned part of the Tararuas because of bad weather, and Harper’s Pass in Canterbury because it was closed. They paddled down the Whanganui River in a canoe and biked through the Mackenzie Country from Tekapo to Ohau. They skipped the city of Auckland, which can take three to four days to walk through.

"We found the cities to be jolting experiences — too many people trying to sell you too much stuff."

"We loved the simplicity of carrying all we needed on our backs," Warwick said.

"It was nourishing to be in the natural world and we felt a strong connection to the landscape. Walking Te Araroa made me aware that we are part of a much bigger whole."

"I felt a much deeper connection to the land, bush and other natural elements, but it was also a very social experience — it was everything," Keitha added.

"Everything" included times when they both felt challenged. Twice they had to cross swift rivers, and although the water was only knee-high, Warwick said he sensed  it could have swept them off their feet at any moment. Keitha, who is a bit prone to vertigo, was surprised at how she mostly managed to walk through her fear. So the steep drop-offs as they descended the Breast Hill Track above Lake Hawea became an exhilarating experience, as they overcame the difficult terrain.

They said their journey ultimately gave them a sense of being "more alive". And their advice to those thinking about walking Te Araroa: "Do it! But travel light."

• 1975: The New Zealand Walkways Commission established. One of its goals is a New Zealand ‘‘scenic’’ trail.

• 2015: TAT and Doc agree to spend $1.6million to complete track construction programme over next two years.