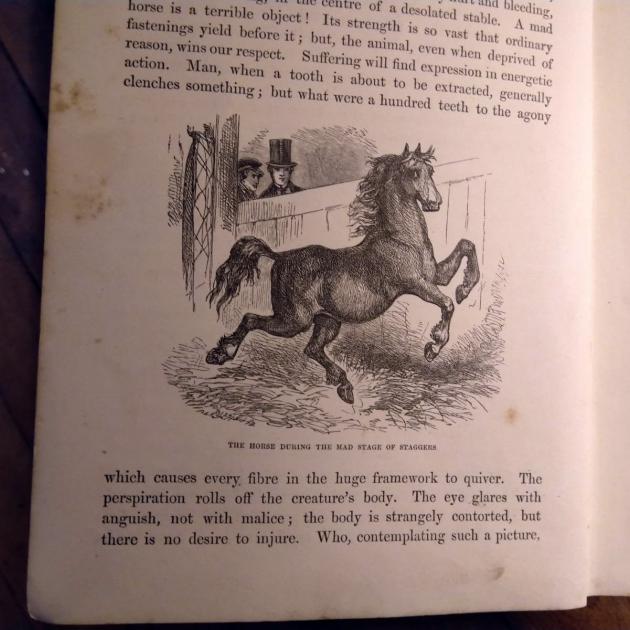 The mad stage of staggers.
Childhood memories are a patchwork; random snatches of scenes mostly hidden, but suddenly surfacing when jolted to consciousness by the smell of sunscreen, or the feeling of flannelette sheet against your cheek, or the pages of a book. In my case, one of those books is The Illustrated Horse Doctor, printed in 1873, that I found last week in a box in my brother’s garage, writes Kate Oktay.

My mother was a horsey person, and a book person, which explained why we had The Illustrated Horse Doctor at home. She used to show it to similarly horsey/book-minded people with a conspiratorial grin and the warning: "It’s really odd".

I hadn’t opened it since I was 10, and I gleefully showed my husband.

"I guess it’s the Victorian version of Popular Mechanics," I said, seeing his confusion at the drawings of top-hatted gentlemen, creepy cross sections of hooves and images that once seen could never be unseen.

There is a lot worth quoting, though most of it terrifying in both the spectrum of disease and the method of cure. Every second page seems to start with an introduction of a new worst disease (or "most terrible of malady" in the language of The Illustrated Horse Doctor). Bog spavin, pumice foot, nasal gleet, all cured with various lances, odd concoctions and more illustrations than one would think necessary of hands reaching into parts of horses that surely should not be reached into.

My favourite page as a child was "The horse in the mad stage of staggers". The prancing black horse looked more sprightly than Angus, the overfed, part-draught farm horse, who could be propelled with a lot of encouragement into a lazy and hoof-dragging trot and occasional reluctant canter when heading in the direction of home. I didn’t care if it was about to drop dead of a Victorian horse disease, it looked much more romantic than Fat Angus. All I wanted was a jet-black horse in the mad stage of staggers. Life was very unfair.

The pictures were lovely; magnificent horses, wounds and afflictions to horrify your friends, and all manner of aprons, shawls and hats not seen in public for more than a hundred years. I went through a stage of talking the way the book was written, which, now that I have a child of my own, I can truly appreciate how incredibly irritating this must have been. Though, to be fair, this was probably a vast improvement on the cowboy stage, when I used the words ain’t, howdy and ma’am, and the fact that I wasn’t kicked to death by an older relative is testament to their patience and ability to tune me out.

The illustrations are beautifully drawn, as you would expect of a book that has the word "illustrated" in its title, but as I looked at it again I noticed that while Mr Mayhew, author and illustrator, was very good with horses and people, his dogs left something to be desired. Whenever they are forward-facing, they have the face of people. Creepy, hairy little dog-people. I must have blocked these out from my memories, because they are nightmare inducing

What I do remember is the nicest of things: my mother and a gaggle of women leaning over the book, flipping pages and cackling conspiratorially together over tea or wine.

Browsing through again I reminisced over "the destructive stage of a horse with hydrophobia" illustration, and the fond memories of pretending to be this particular horse in my bedroom. "You are not normal now, but maybe you are better than you were," my husband said quietly as I explained the mad whinnying and tearing blankets off the bed in a fury of hind-leg kicks.

Over the past few days I found new passages that reflected my current life stage better: "delicate ladies in peculiar states are accustomed to ‘take hearty pulls’ at porter or at stout," says the chapter on horse exhaustion.

When I notice raised eyebrows after reaching for a third wine, in what may be considered rather too quick succession, I explain, "I am in a peculiar state and Mr Mayhew told me to."

You are unlikely to get the sack, but when we did we got Sack, a type of medieval sherry.