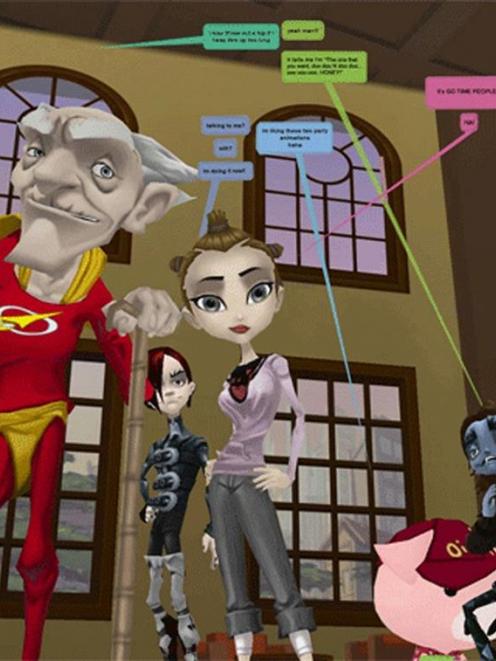 As if Google didn't have a strong enough hold on the planet, it has launched its own world - a virtual world, to be exact.

Lively.com, which Google likes to call a "virtual experience," allows you to create an avatar, decorate your own virtual room, invite friends to your room and do things you've always dreamed of, like blow up oil barrels on a deserted island.

Unlike popular virtual worlds, such as Second Life, Lively doesn't require you to download new software.

All you need is a browser plug-in.

The service is distributed more widely than Second Life: Its rooms will live on web pages on Facebook and other sites, so you might stumble across them when browsing the Internet.

Rooms can be private spaces, with entry by invitation only, or open-topic rooms, where you can meet people interested in discussing topics you enjoy.

It also ties into other Google services.

You can stream YouTube videos into your virtual living room or post your Picasa pictures on your walls. It's easy to choose avatars from a number of different options, including a turban-wearing bear.

It's easy to change their clothes, hair colour and skin colour.

It's easy to drag and drop furniture and lava lamps to position them around your room.

Want your turban-wearing bear to wave to the hot mama across the room? Just type \wave.

It's sort of a combination between anime and a Disney movie, with wide-eyed avatars and colorful, angular scenery.

Chat bubbles are brightly coloured and attached to avatars with long stems.

All of which leads to the big question: Is Lively going to be the site that finally brings virtual worlds into the mainstream?

"With a player like Google jumping into this, you're going to see a lot more people understand this space and pay attention to it."

Lively's popularity with the virtual world crowd will depend on a few factors.

Will Google allow avatars to buy and sell virtual goods? Will there be any currency at all in Lively?

Will users be able to create things from scratch? A Google spokeswoman said that there isn't any currency in Lively, but that users will be able to add objects from Lively's catalogue to their rooms free of charge.

With all these features and more rolling out later, Lively is likely to give Second Life and other popular virtual worlds a run for their money, Michael Gartenberg, the research director at Jupiter Research, said.

That's because, like most Google products, Lively is free.

It has since announced that is working with IBM to figure out how to teleport avatars from one virtual world to another, a development it calls "a historic day for Second Life, and for virtual worlds in general".

That means that down the line, an avatar in Second Life might be able to visit a virtual world such as Habbo with ease.

Maybe some day, they'll visit Lively too - unless the virtual world space ain't big enough for the both of them.