Not a sure thing 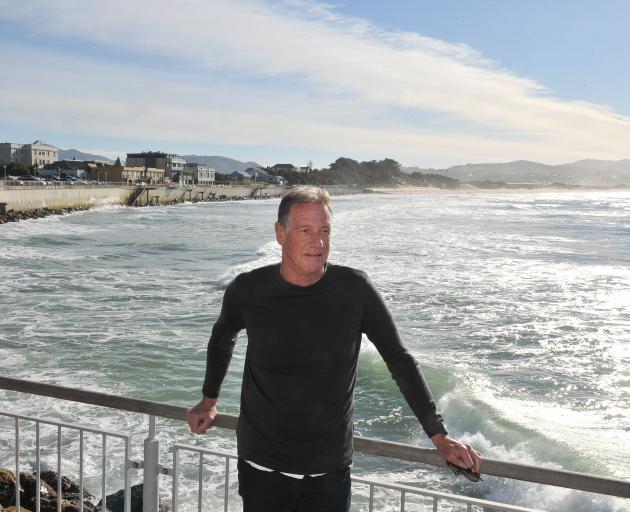 Prof Doug Booth at St Clair, a beach that has changed with the times and will do so again. Photo: Gregor Richardson
Our love affair with the beach could turn to fear and rejection, Prof Doug Booth warns. But either way, we need to learn what it means to live with the beach, he tells Bruce Munro.

Chatter among cafe-goers enjoying the mid-morning sun outside the St Clair Hot Salt Water Pool is as bright as the blue spring sky, as sparkling and frothy as the cresting ocean waves.

Among the happy hubbub sits a tall, trim man in his early-60s. Athletic, tanned, he does not fit the stereotype of a university professor.

This is Doug Booth, professor in the School of Physical Education, Sport and Exercise Sciences, at the University of Otago.

He was born and raised in Australia, educated there and in South Africa. One of his first books was on Australian beach cultures, examining the tensions and conflicts between surf lifesavers and surfers. His doctorate, researched in the mid-1980s, was on international sports boycotts of apartheid South Africa. He also studied the role of race in beach use as segregation came to an end in the rainbow nation.

For the past 24 years, Prof Booth has pursued an academic career - as well as an avid interest in surfing and ocean swimming - in New Zealand, most of it in Dunedin.

His latest contribution is a chapter he has written for the about-to-be-released new book New Zealand and the Sea: Historical perspectives.

An accessible, academic publication by BWB, New Zealand and the Sea, edited by Frances Steel, has contributions by 17 New Zealanders with expertise ranging from history and marine science to archaeology and visual media. 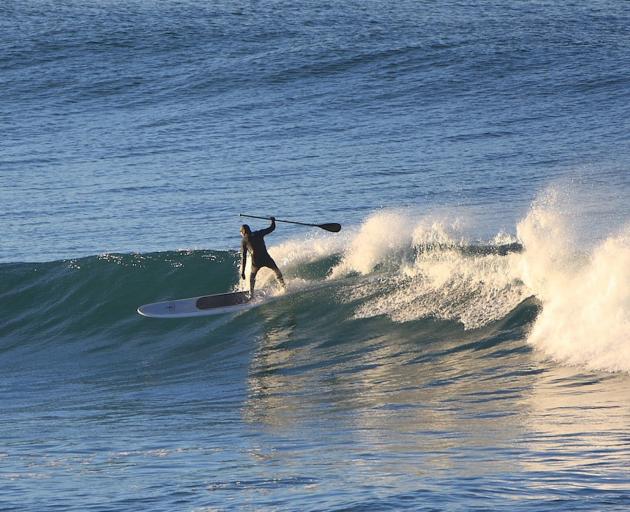 His chapter is entitled Living with the Beach: Representations of the Otago Coast.

Sitting within spitting distance of the surf rolling on to the rocky foreshore; the smell of ground coffee and sea salt in the air; the sound of seagulls, waves and cafe patrons coalescing in a fitting aural backdrop, Prof Booth is talking about the different ways we view the beach. With it will come an unexpected warning and a radical suggestion, both threatening to turn on its head the way many of us think about the beach.

New Zealanders have a love affair with the beach, Prof Booth says.

About 65% of the population lives within 5km of the coast. Many New Zealanders, through industries such as tourism or aquaculture, have the beach as part of their daily lives. And going to the beach for annual holidays has been an important element of the Kiwi lifestyle for more than a century.

Cumulatively, it gives the beach "a primary place in the New Zealand psyche".

"Dunedin is a classic example of that. To live by the beach is now seen almost as something of a status symbol.

"If you look at houses that were built overlooking the beach in the 1940s, '50s and '60s, the majority have their lounges and living rooms facing the road. Whereas now, people are buying and renovating those houses and turning them around so that the living room and kitchen are looking at the sea.

"So, the seascape and the beach scape have become almost part of the fabric of life."

But, and here is Prof Booth's thesis, how we think about the beach - our concept, our representation of the beach - has changed over time. It can also vary from one person to the next, he says.

Prof Booth has identified five representations of the beach.

This photograph of St Clair Beach, taken between 1915 and 1920, shows how enduring the love affair that New Zealanders have with the beach is. Photo: ODT files
The first is the Mana Whenua Beach. When the first Pasifika colonists arrived in Aotearoa, and with time migrated down to Otago Peninsula, they found a bountiful but unfamiliar coast. It took a couple of hundred years to learn, adapt and become stewards of the land and sea. With time, southern Maori iwi, Waitaha, Kati Mamoe and then Kai Tahu, developed a sense of interconnectedness with the coastline. Beaches, estuaries and headlands were named for their food, cultural and whakapapa, genealogical, connections. In the Mana Whenua representation, the beach is part of you.

The first European settlers brought a very different concept, that of the Abundant Beach - the beach ripe for exploitation for resources.

"What I find astounding is that when the European settlers arrived here they made no effort to understand what Maori could have taught them."

Sealers, for example, took less than two seasons to extinguish the seal colony on White Island, off the St Clair coast. They then proceeded to do the same up and down the coast.

"When you see it all as a resource and you have an ideology of progress that justifies the extraction of those resources, then you're only a couple of hundred years to an environmental and ecological catastrophe, as we are discovering. The forthcoming mass extinction actually began 200 years ago - we're in it now."

Competing with the Abundant Beach was the concept of the Picturesque Beach.

Some of the early European colonists saw the coastline as scenic, beautiful, a place for contemplation.

Noted 19th century rambler Peter Thomson, for example, writing in the Otago Witness, in October, 1867, encouraged local residents to visit the basalt columns of what would become known as Blackhead. He compared it favourably to the popular United Kingdom tourist sites, the Giant's Causeway, in Ireland, and Fingal's Cave, in Scotland. 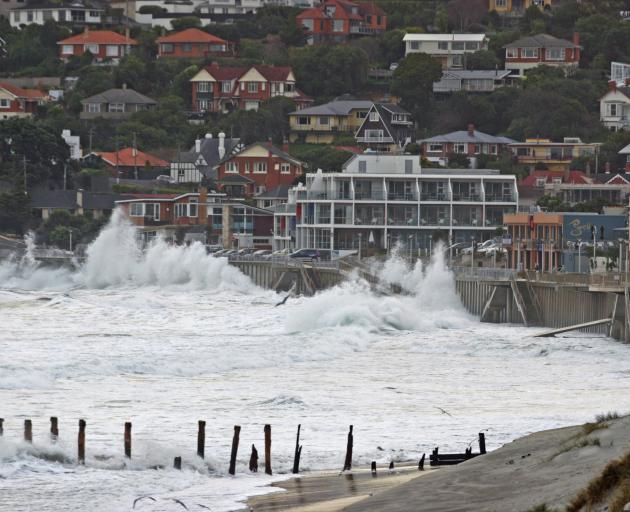 Building a vertical concrete wall on the high tide mark is not acknowledging a dynamic environment, Prof Doug Booth says of the St Clair Esplanade, pictured here during a large swell in 2015. Photo: New Zealand and the Sea; Mark Stevenson
Blackhead, known to Maori as Makereatu, was "a revered site, an atua [a god] in its own right, a site to be preserved".

Had it not been quarried, it could have been a wonderful tourist site, Prof Booth says.

"Now, it has been lost. But it would have provided a fantastic place where visitors could have connected with the Maori perspective on the environment."

It is an extension of the Picturesque Beach. St Kilda and St Clair are excellent examples, Prof Booth says.

People went there to view the scenery. Then they went into the water up to their ankles, then their knees, their waists ...

"Then the more adventurous were playing in the surf and trying to ride the waves. New equipment arrived to ride the waves and by the mid-20th century you have the clear emergence of a really distinct culture, chasing the waves."

This longstanding affection for the beach could change, dramatically, Prof Booth warns.

It is a jarring comment on such a perfect seaside morning.

"If we are thinking of the future - and thinking of things such as climate change - if the beach becomes a much more tempestuous or violent site, then it's easy to see people turning away from the beach.

"You won't have such a love affair, if every second month the place is bombarded with violent, smashing seas driving the coastline inland. If your property is at risk and there are violent storms, you're going to have a different perspective of the beach from one that is calm 300 days of the year.

"We need to understand that there is constant change."

Competing views of how the beach should be used produced the final representation in Prof Booth's schema, the Managed Beach.

"Traditionally this was all about control. It was all about, we have the technology to control the environment." 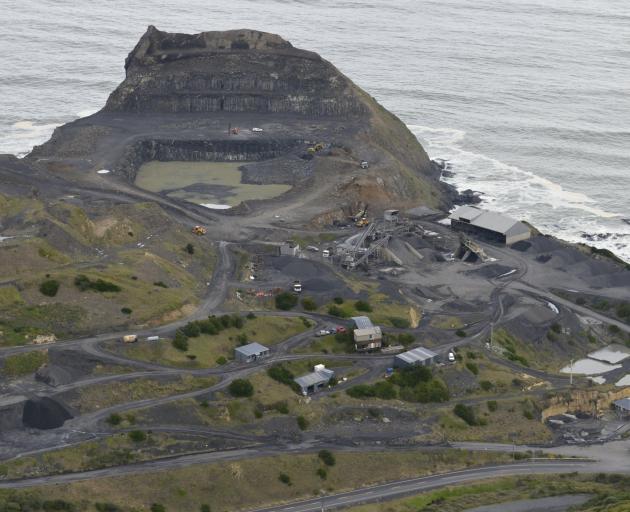 An aerial view of Blackhead Quarry taken last year. Photo: ODT files
The Managed Beach is not a view he endorses.

"One of the central debates is, do we control the beach or do we withdraw, acknowledging that the beach is a dynamic environment, constantly changing, that it is an agent and needs space to move?"

The troubled history of the St Clair Esplanade is a classic case in point, he says.

"Building a vertical concrete wall on the high tide mark is not acknowledging a dynamic environment. And then, as bad, putting a whole lot of rocks in front of a vertical wall when the only thing that they are doing is damaging the wall behind it as the sea throws the rocks into the wall, breaking it up and undermining it.

"You only have to walk along the base of the wall to see the damage that is being done."

What is needed is a new approach, he says.

We need to learn to live "with" the beach.

"Living with is about allowing the change and appreciating and valuing it, acknowledging we are in a dynamic environment.

"We can destroy it or be the caretakers." 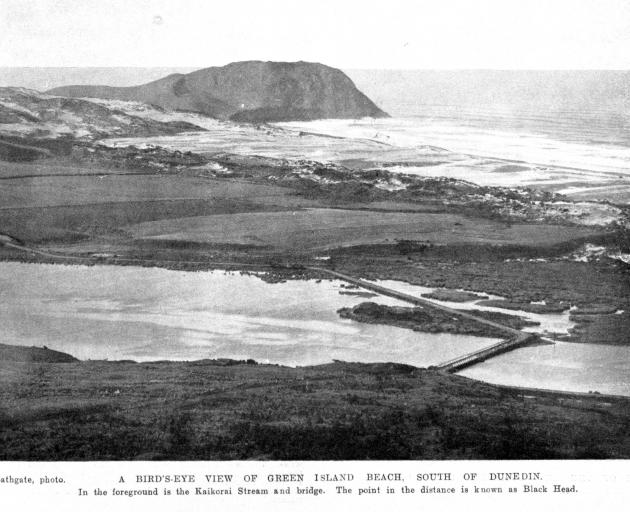 Blackhead as it appeared in the Otago Witness 109 years ago. Photo: ODT files
Change is inevitable, Prof Booth says.

Whether it be through run-away, human-produced climate change, or the natural aeons-long cycles of nature, we need to accept that enormous change lies ahead.

And the changes can happen extremely quickly, he warns. 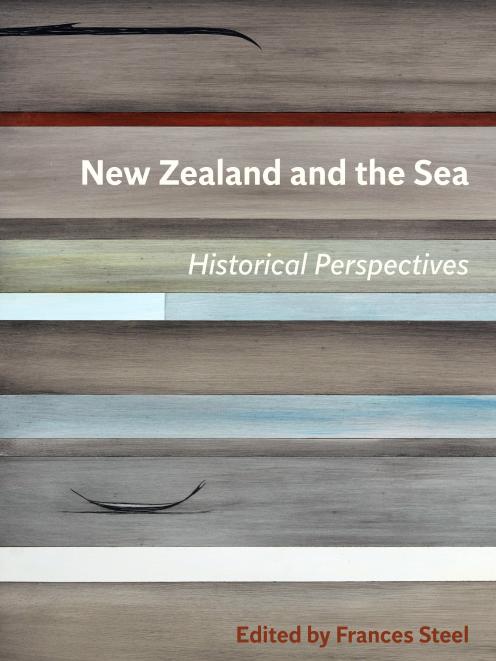 "The point is that these changes do come about unbelievably quickly."

Prof Booth says the implications are radical, but manageable.

"Even if we stopped all the greenhouse gases that are going into the atmosphere at the moment, we're still going to get a 1.5degC rise.

"One would expect that to have some implications for South Dunedin.

"If you're the city council and you're going to go acknowledge a dynamic environment ... then you start buying up all the properties along the foreshore for a potential retreat.

"You're not going to lose any money because you lease them back to people in the interim while they are still viable."

A more distant horizon, a longer term view, is urgently needed, he says.

"Here's an absolutely critical issue, what is your time scale?

"At least the Germans and the Dutch are looking at a line of 200 or 300 years for the sea.

"In New Zealand, Australia and South Africa it is an election cycle."