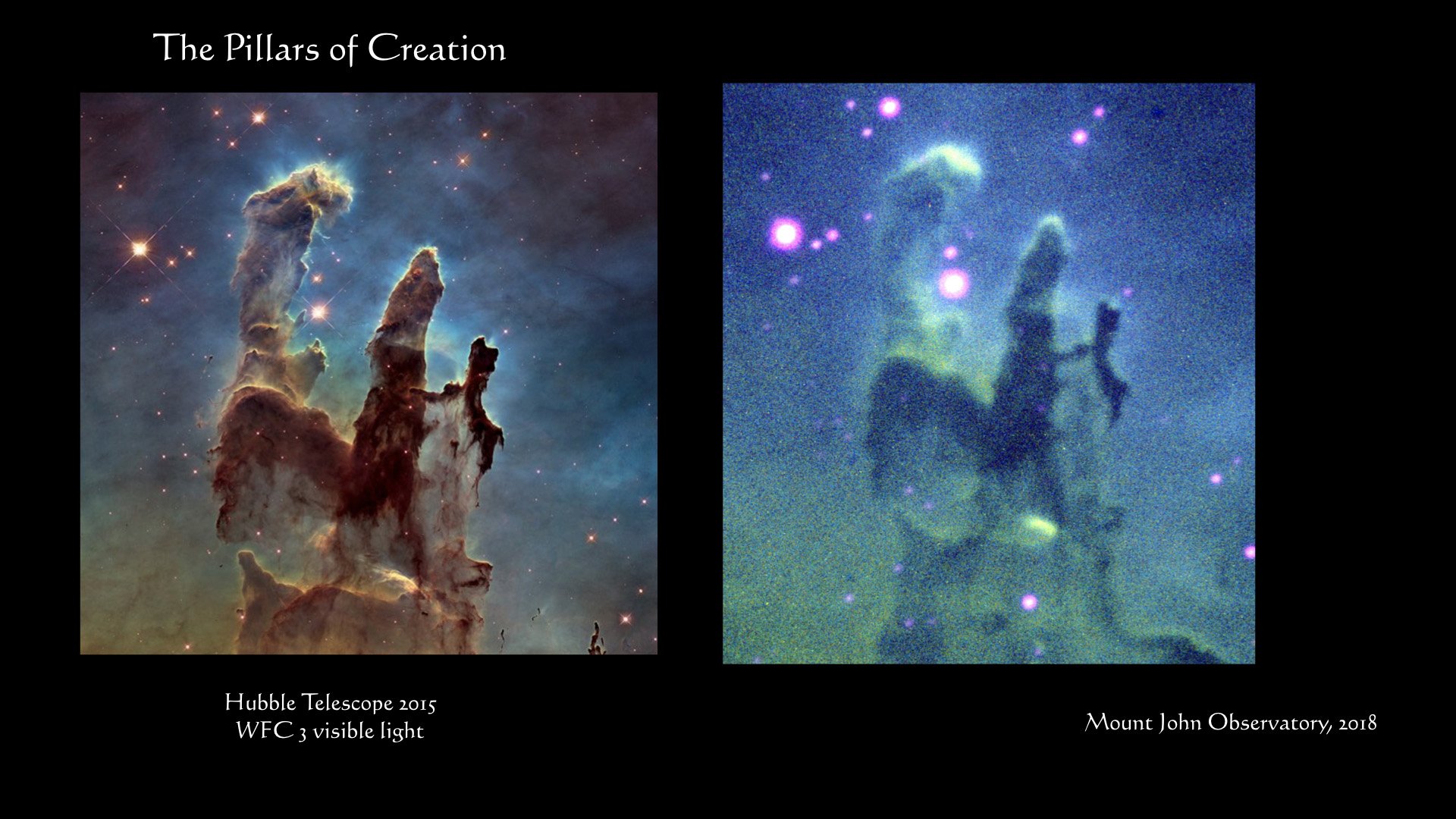 The Pillars of Creation taken by Ian Griffin at Mt John Observatory (right) and the Hubble Telescope. Image: Supplied
A few weeks back I was allocated time to observe Mars, using one of the telescopes at the University of Canterbury's Mt John Observatory.

At certain times during the night, Mars was too low to observe, so the telescope was available for observation of other objects.

This gave me the excuse I needed to try an experiment I have wanted to carry out for a number of years. In short, I wanted to compare a ground-based picture of a beautiful part of the sky with a picture of the same region taken using the Hubble Space Telescope, Nasa's flagship observatory, a 2.5m-diameter telescope that orbits Earth every 95 minutes.

The ''Pillars of Creation'' is an iconic photograph taken by the Hubble Space Telescope. It shows dark clouds of interstellar gas and dust in the Eagle Nebula, a fascinating region of our galaxy some 7000 light years from Earth in the constellation of Serpens.

Astronomers use the name ''Pillars of Creation'' because studies have revealed intense star formation is occurring inside the dense dark towers of gas and dust. Taken in 2015, this picture was named one of the top 10 photographs from Hubble by Space.com.

In the early hours of July 31, I pointed the 0.6m telescope at Mt John towards the Eagle Nebula, and opened the shutter on my camera. For the next 30min I waited patiently as the camera slowly captured light from the distant nebula.

A side-by-side comparison of the picture taken from Mt John with the iconic Hubble is revealing. Of course, there is no comparison; the Hubble image, taken with a far bigger telescope, is much higher resolution and reveals far more subtle detail.

Of particular interest is the sharpness of the stars in the Hubble image. This is primarily because the telescope at Mt John has to observe through Earth's atmosphere, which has the effect of blurring the images it obtains. Hubble orbits at an altitude higher than 500km, so the effects of Earth's atmosphere on its images are imperceptible. It is certainly an amazing telescope!