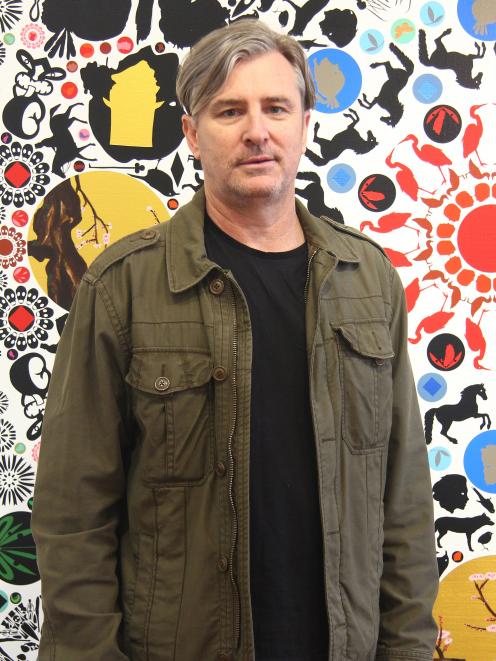 Chris Heaphy in front of The floating world. Photo: Milford Galleries Dunedin/Glenn Frei
Chris Heaphy tells Bruce Munro about the constant evolution of his art and the underlying, unchanging aim.

Chris Heaphy is more interested in change: how the artist, the art and the audience change as they interact with each other.

It is a busy afternoon for Heaphy who is preparing to travel with his wife and their young son from Westmere, Auckland, for this week's opening of his exhibition Supreme, at Milford Galleries, in Dunedin.

Most do not know that Heaphy (52), who was born in Palmerston North and has exhibited his work in New Zealand, Australia and Europe, spent a month at the Dunedin School of Fine Art, in 1987.

Not long after starting, however, he got a letter of acceptance from Ilam School of Fine Arts and choose the Christchurch degree course over what was then a diploma course in Dunedin.

"I only got a slim taste of Dunedin at the time, but absolutely loved it," Heaphy says down the phone.

This time he is returning south with an established career and a growing body of critically acclaimed and publicly sought-after work.

Work that has changed and continues to change, he says. 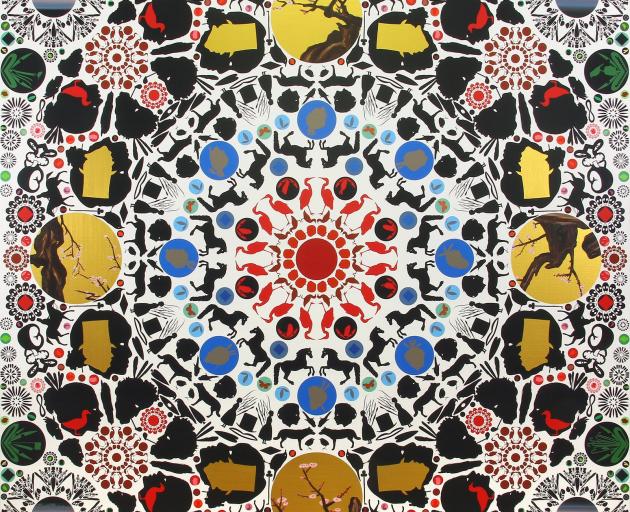 Chris Heaphy, The floating world (2017), acrylic on Belgian linen. Images: Supplied
Some species of shark have to keep swimming or they die.

There appears to be a parallel with Heaphy.

"Whereas other people are perfectly happy to come up with a style ... [mine] is constantly evolving and changing."

Subdued tones have given way to vibrant colours. Complex monochromatic works have been replaced by stripped-back, pastel coloured pieces.

"In the past I have filled up the canvas with a myriad of things to try to say that while we are walking around during our day we are constantly giving off and receiving these things" - messages that may or may not be interpreted how they were intended.

"These recent works are more pared back, so as to become more contemplative. I'm saying to you that the gaps have meaning as well."

It is a role he takes seriously. But the change it produces does not please everyone.

"Some say, you just gave us that, and now you're giving us this.

"I can see it's a problem for some people. But for others it's like, wow, that's great."

Heaphy also gets quizzical looks about the lack of plain meaning in his work.

"People don't know what to make of it. They go, that's all very well Chris, just tell us what it's about. But it doesn't work like that."

Some artists aim to reproduce or translate a scene or communicate an idea through their work. Heaphy is drawn to explore misunderstanding, reinterpretation and the meanings that viewers independently invest in an artist's work.

"Slippage of meaning" is a phrase he uses severally. 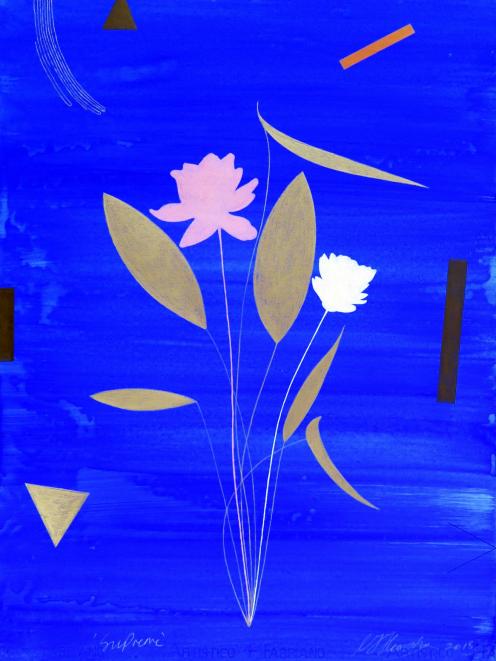 Chris Heaphy, Supreme (2018), graphite and acrylic on Fabriano paper.
Maori culture adopted a lot of European imagery, Heaphy, who is of Ngai Tahu descent, says by way of explanation.

"In particular, I first noted it on meeting houses in the North Island that had card symbols carved on them. I thought, wow, that's really weird."

"So there is slippage. In the West the card symbols can be seen as almost negative, related to gambling and things like that. But Maori, particularly on the East Coast, used, for example, the club symbol from cards to represent the cross.

"I thought it was incredible that one thing could slip into a culture and be adapted and adopted" - understood in a completely different way.

Despite his ever-evolving style, Heaphy says one constant has been the use of icons to trigger responses in the audience.

By icon, he means a symbolic representation of an object, which in his art is often portrayed in silhouette form.

"The way we can pare something back to a very direct language has always interested me.

"In the past, filling up the canvas was really trying to make all these connections, to show that there is constant slippage between meanings. Mickey Mouse, if I put it next to a silhouette of a New Zealand native bird, our brains can't help but make some sort of connection, albeit ridiculous or profound, or emotional ..."

In his most recent, less frenetic works - which are ostensibly stylised flower arrangements - the various objects, shapes and colours are still all precisely painted and assembled in hope of eliciting questions, reactions, discoveries.

"Flower arrangement; it's an interesting phrase. How do you arrange a painting? Why did I put green there and a slightly different green over there?

"It's just the artist taking you on a journey, not only in an emotional or subjective way to do with meaning or no meaning, but also in a visual way.

"I'm not trying to illustrate the landscape. I'm trying to mine your experiences."