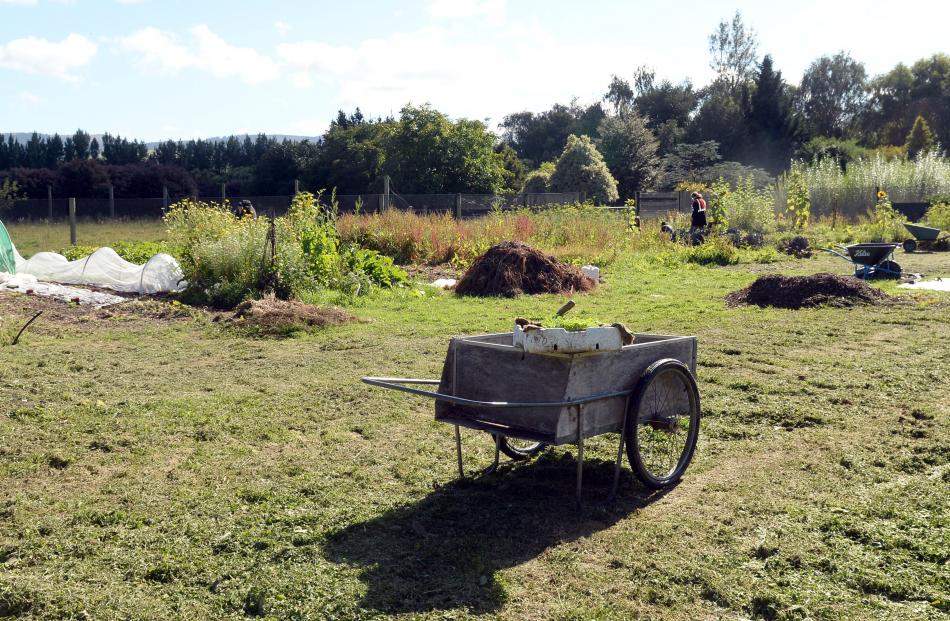 A barrow full of seedlings, waiting to be planted, at Kowhai Grove. Photos by Linda Robertson. 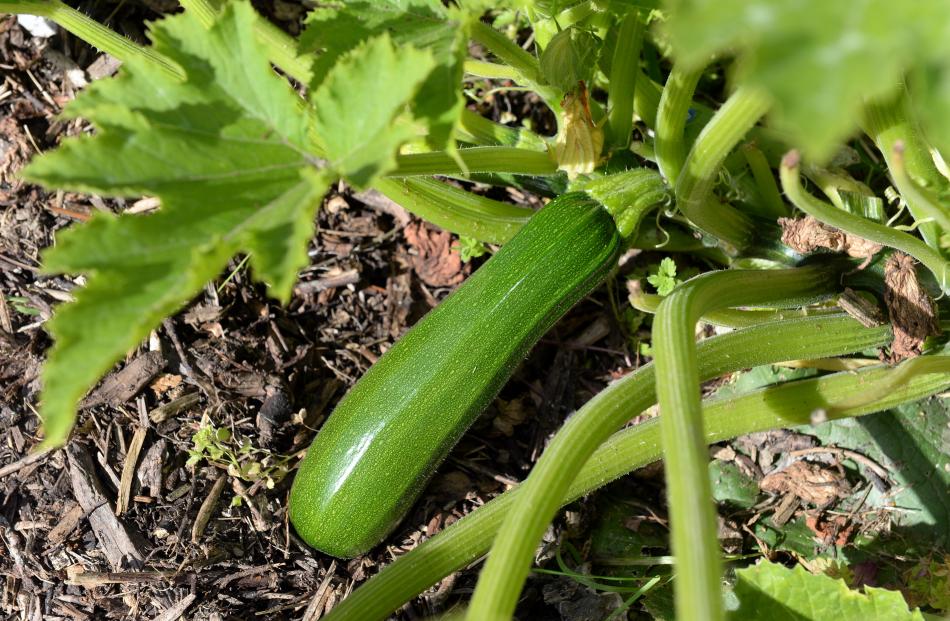 Zucchini is on the menu for the garden cook-ups. 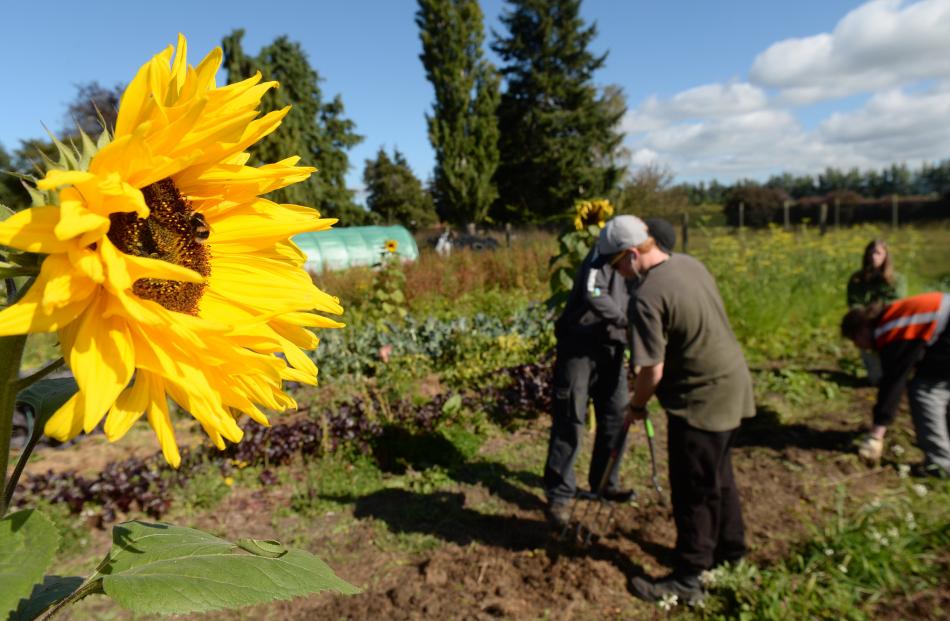 In the potato patch. 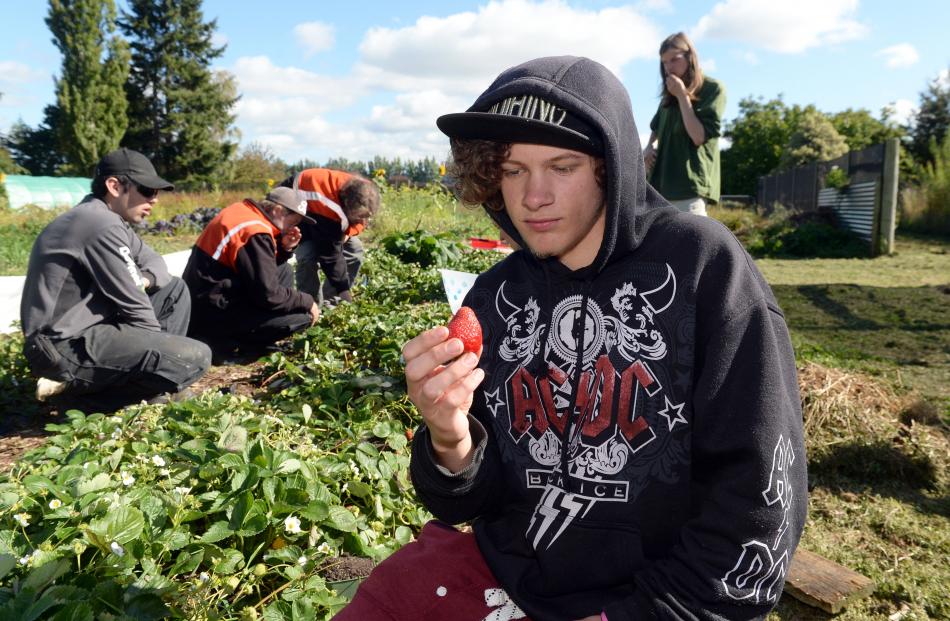 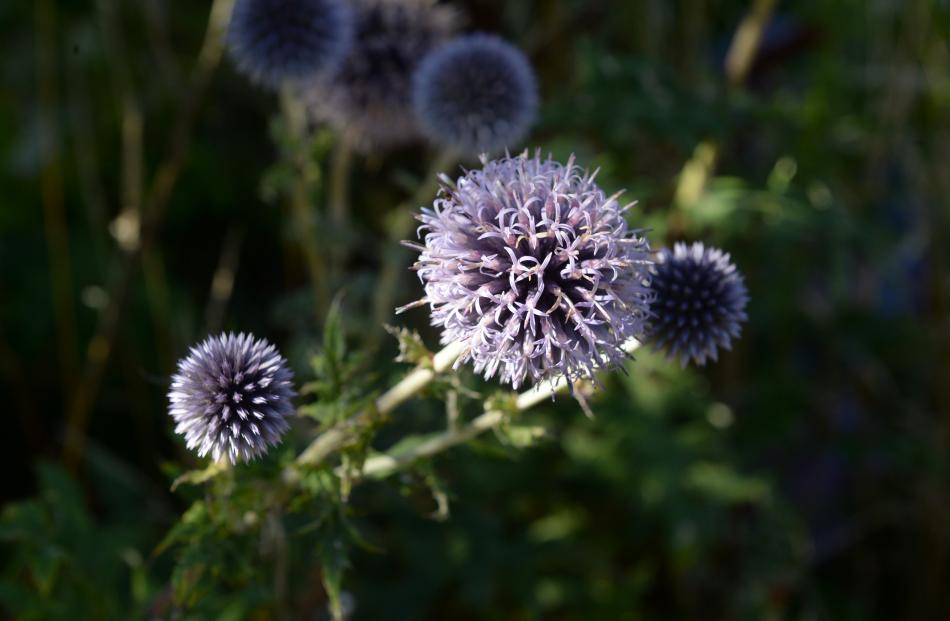 A globe thistle to attract the bees.

Jethro Schreuder is sitting at the edge of a field of long grass staring into the future with a young FarmHand trainee. The view is wide open, bright with sunlight and clear blue overhead.

To their left is a stand of cabbage trees (Cordyline australis), planted in a tight grid so that their discarded leaves make the most unusual carpet. It's a research plot. Presumably those responsible are interested in growing better cabbage trees. Or at least in discovering more about their potentialities.

Schreuder, a youth worker, sometimes sits in there, on the fallen fronds, discussing life with one of his charges. Surely anything is possible in those moments.

Behind them as they sit today, their hopes and schemes drifting off across the grass seedheads with the other pollinators, another curious plant-based experiment sends up vigorous shoots.

These are willows, of all sorts, originally planted as an AgResearch research project and pollarded close to the ground. They are now tended and harvested by enthusiasts, curious about the myriad uses to which the crowded cultivars might be put.

Further on again past the willows, there is a busy field. People crouch over vegetable beds or push a spade into the rich Taieri soil. They are planting and harvesting simultaneously. Brassicas are going in. Potatoes, purple, are coming out. But someone will comment later that the field is also growing people. It's an experiment in its own right.

We're at Kowhai Grove, a flat field behind a hedge on the Taieri, north along Factory Rd from Mosgiel. About half a hectare of AgResearch land. It's primarily a training facility for young people, having grown out of the Malcam Trust's 17-week FarmHand course. FarmHand has been running since 2014, set up by Annika Korsten in conjunction with Malcam to connect the dots: young people without a job and opportunities beyond the town boundary.

Korsten decided the course needed a home of its own, where trainees could get hands-on in a safe and supported environment, and make a contribution. So now there is Kowhai Grove, officially launched in January, Mayor Dave Cull helping to plant a tree.

Schreuder is part of the team, providing both a guiding hand and an extra pair of hands in the garden.

''I'm one of the guys learning here, so it makes me part of my group, rather than as a tutor, which is of course the main part of what I do,'' he says.

It's a very orderly and well-organised-looking set-up, which is down to good planning rather than luck. Jason Ross of Waitati nursery and landscaping business Habitate did the site plan with assistance from Dunedin permaculture teacher Peta Hudson, funding from Otago Polytechnic and input from a previous FarmHand cohort.

''The soil is just great. Everything just grows in it,'' Korsten declares. Well, we are on the Taieri.

As of January, Korsten is full-time at the garden, trying this and that, inviting school groups and others to come and have a look, pitch in.

''Over time I have realised that it is not just a place for FarmHand,'' Korsten says. ''Let's get other young people to come here too.''

That has included students from the Dunedin Training Centre, foundation students from Otago Polytechnic, a holiday programme and visits from primary and intermediate pupils. Corrections is using the grove for community-based sentences, with the aim that time spent working off hours imposed by the courts becomes a productive learning experience.

And Korsten would like to find a way to get some of the local senior community along, perhaps one or two experienced gardeners to get some intergenerational interaction happening.

If you want to garden, you're welcome.

Beyond the garden already established, there are plans to add an orchard, and for chickens and ducks, creating a genuine small-scale farming operation. In among the veges there is a row of apple and pear root stock, settling in in readiness for transplanting. Once planted out, different varieties will be grafted on. More good learning.

The plans all seem very likely, given what Korsten and co have achieved in a short space of time, the allure of her Arcadian vision and her rapid-fire energy. This despite the fact she's currently funded from Malcam's sundries column.

''It is just trialling all the angles at the moment and seeing how each group responds to the place and what we can offer,'' she says. ''Often we collect food out of the garden and cook it, so that's one of the big highlights of the day: that we collect the food and we actually do stirfries or something like that.

''Which is really nice because the young people get to see the low travel-miles of the food, and eat healthy, tasty, fresh food. And often they would have grown it themselves, which is great, you know.''

Yes, Korsten knows what she's about. She's German, originally from Aachen, where Charlemagne was buried, but has been in New Zealand for nine years, having shifted here to do ecology at the University of Otago. That was on the back of biology and botany study in Bonn. She began gardening there, 13 years ago, with tomatoes on her balcony.

How did they go?

''Anytime you start off gardening it is hit and miss,'' she says, with a characteristic chuckle. ''You learn along the process and every year you learn something new.''

Today, the nets are thrown back from the long Kowhai Grove strawberry patch and the FarmHand trainees are in, diving on the fat red fruit with gusto.

They are the focus for the grove at the moment, young men and women in their late teens for the most part, who get to scrub up on a few vocational skills while getting their hands dirty learning some larger life lessons.

''While you are working here you are having conversations, you are building confidence in something that you like doing,'' Korsten explains.

''You see that you are actually capable of doing something. People may not have had that experience and that goes through all ages ... They are building connections and they learn how to work in a team, they build their self-esteem obviously through that. And also build up their fitness.

''It's not just about the horticulture itself, it's like a tool in a way, to uncover some potential. By working outside, by being on the land, by putting your hands in the dirt you are building a connection to yourself and to the land.

"Whether someone goes away and does horticulture or not for me, at that moment, is actually not important, it is someone learning about themselves and their community and then being able to move to the next step, whatever that is, in life.''

Even if the fledgling farmhands do not go on to make farming an occupation, Korsten hopes their experience at the grove might be a catalyst for developing a home garden, or influence their food choices.

''It might be something really small but that is a step towards changing the whole culture of food.''

The students leave more resilient, having learned a little about food resilience: doing for yourself, with others.

It's not just the workers getting fed. A social enterprise leg of the Kowhai Grove initiative has involved selling a ''mystery'' food box of produce to the polytechnic's Ozone Cafe.

There's the straightforward exchange involved: some income for the garden, some ingredients for the cafe, but Korsten again sees a bigger picture.

The ''mystery box'' puts the onus on the cafe cooks to work with what is seasonal from the grove. That's how chefs should work, Korsten says, rather than writing a menu and expecting the ingredients will be available. Flipping the dynamic around looks after local producers, who graft away at the mercy of the elements.

A further experimental income stream is a vege box scheme, at present supplying just a handful of people, on a weekly or fortnightly basis. The $30 boxes contain whatever's ready to harvest.

''There is demand for more by the looks of it. But we can't meet that at the moment. So it is looking at expansion next spring,'' Korsten explains.

One of those on the receiving end is former Dunedin city councillor Jinty MacTavish, who posted on a social media account: ''A wonderful back-to-the-future moment happened yesterday. At our place, we received this glorious box of locally-grown, spray-free vegetables, direct from a local market garden.''

Organic compost is another possible revenue stream on the drawing board, alongside honey production.

Kowhai Grove appears to have it covered.