Putting down some roots 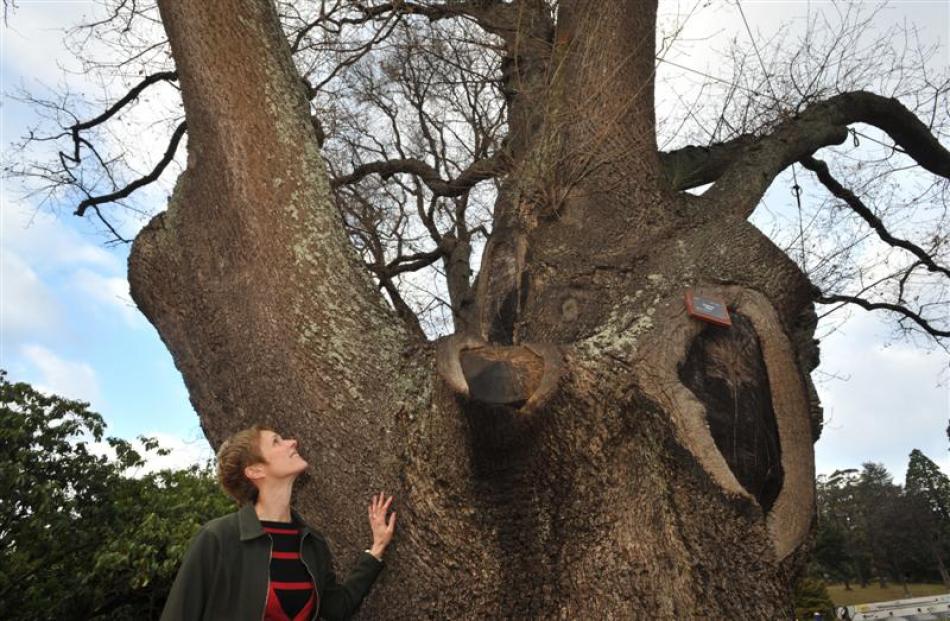 Clare Fraser with the remaining royal oak at the Dunedin Botanic Garden. Photo by Gregor Richardson. 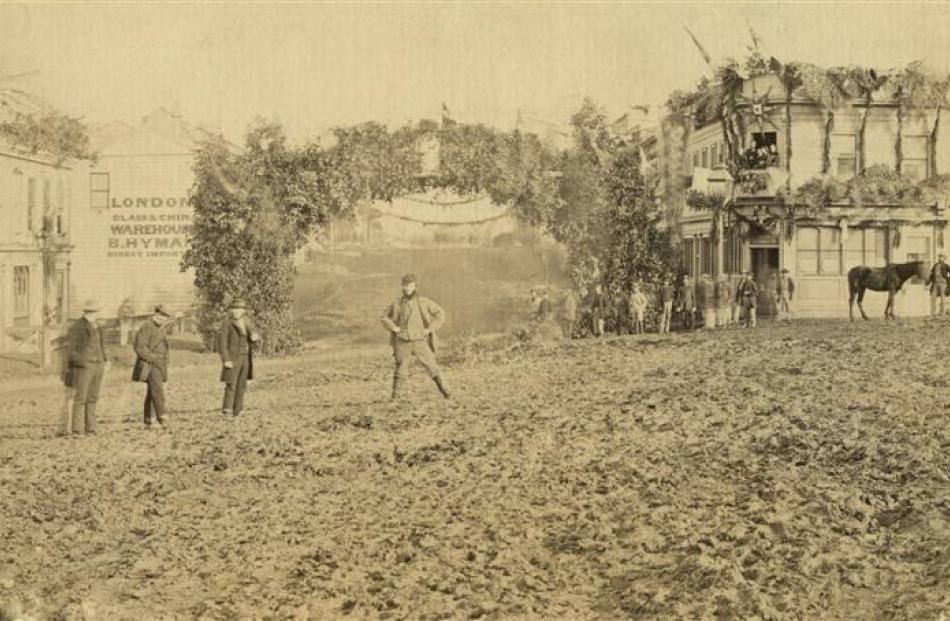 Garlands and triumphal arches were erected, as in this photo taken on the day, showing the decorated Octagon Family Hotel on the right, in the southwest corner of the Octagon. Photo from the Hocken Collections S13-562. 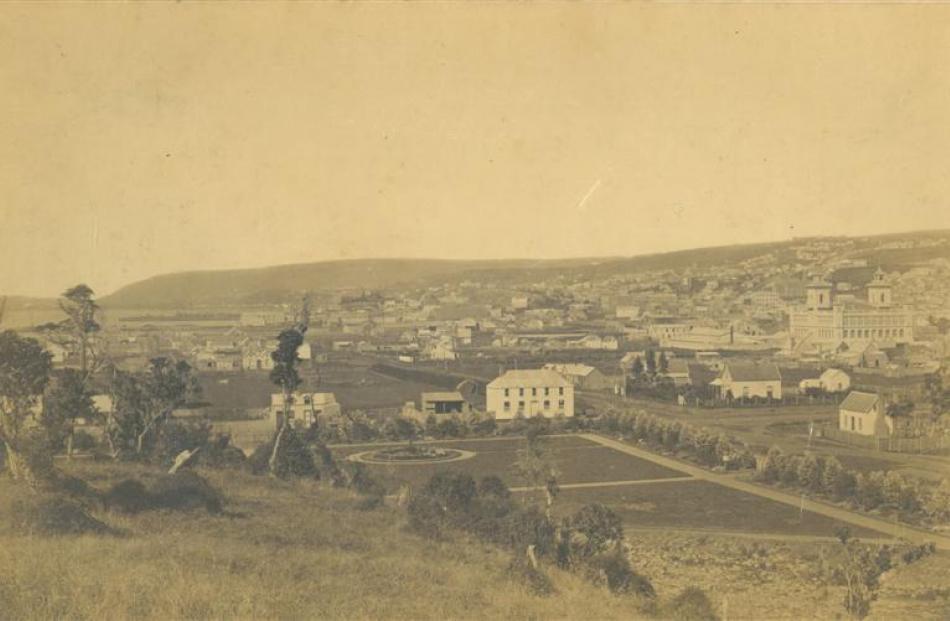 In this photo, taken three years after the events, a circular garden contains one of the 'royal oaks'. The white building, a hotel, sits on the corner of Castle and Albany Sts, where the university's Clubs and Societies building is today. Photo from...

A mighty oak stands near the entrance to Dunedin Botanic Garden, its leafy boughs throwing shade out beyond the border.

Its canopy touches 23m, proof of its age. Indeed, it is almost as old as the garden itself, but not quite. Contrary to popular belief it was not in fact planted to mark the garden's beginnings, but as a symbol of home for Dunedin's early Pakeha settlers, who were at that time, still exotics themselves in a distant land.

This oak, and another, were planted to celebrate the royal marriage between the Prince of Wales and the Danish Princess Alexandra in 1863. At the time Dunedin Botanic Garden, including its two royal oaks, was situated on land now used by the University of Otago. However, the land was prone to flooding, so in 1869 the Garden was relocated to today's site in North Dunedin.

The formal tree-planting ceremony to mark the royal wedding on June 30, 1863 was the first public event at the garden and subsequently taken as the official founding of Dunedin Botanic Garden.

At the time, the planting was primarily intended as a reminder of a much larger, almost wildly elaborate demonstration of loyalty, designed to be read in newspapers on the other side of the world, rather than celebrating the opening of the garden.

In fact, when news of the marriage touched New Zealand's shores, it was such big news that a public holiday was decreed in Dunedin.

Otago was then the wealthiest and most populated province in New Zealand. The Government contributed 500 towards the wedding celebrations, stipulating that ''no part of it should be expended in illuminations'' (Otago Witness, July 4, 1863), ''deeming it unsafe to sanction this form of demonstration in a city containing so large a number of buildings constructed of inflammable materials''.

The next major step seems to have been made only seven days before the public holiday, when an organising committee was appointed. Sixty-one men were chosen, including such notables as Dr Hocken, the early collector, Mr J. Cargill, who left us the tunnel at Tunnel Beach and Mr J. Vogel, the founder of the Otago Daily Times. The committee decided:

1. That a feast be given to the school children.

2. That two oak trees be planted in celebration of the marriage.

3. That the poor of Dunedin should participate in the general rejoicings.

But much, much more eventuated and the city outdid itself. There was a ball. There were junketings (party, banquet or outing) at Vauxhall Gardens across the harbour, where there was a wedding cake containing gold rings, there was even the ceremonial roasting of a whole ox in the Octagon at midnight. All this happened about 15 years after the founding of the city, which may offer a clue to the motivation for such festivities. But first, let's look at some of the other intricacies the people devised.

A small supply of flags was found and others made for the occasion, ''their snow white and brilliant red were thus unsullied by a stain'' (Otago Witness). But flags weren't enough. Branches of fern and cabbage tree were wound around verandah pillars, wreathed about windows and lintels and arranged lavishly on house fronts and shop doors. A procession was a highpoint of the celebration but days of rain beforehand cast doubt.

Finally the Monday was dry and workmen used moonlight to work through the night, scraping from the principal streets ''the mud which is the necessary daily creation of a bustling traffic''. The following day the procession started from near Jetty St in Princes St. It was a quarter of a mile long and headed down the main street to the ''Botanical Gardens Reserve''. The two oldest gardeners in the province were ''the bearers of the two sapling oaks which future generations will, it is hoped, look upon as gigantic trees, living memorials of the events of the day'' (Otago Witness).

The procession included mounted policemen and horse-drawn coaches, highland pipers and school children, Dunedin rifle volunteers, the volunteer fire brigade and the Friendly Societies of the Oddfellows and the Ancient Order of Foresters. There was also the Town Board, members of the legal profession, members of the civil service and ''a number of gentlemen, mounted and on foot''.

''In the hotels and other buildings the windows were filled with ladies, and the waving of their handkerchiefs was sure to call forth a response in the musically crowing cheers of the school children,'' (Otago Witness). This is presumably when the children were not ''trilling the National Anthem''. By the time the procession reached Great King St, it had hundreds of followers who took a short cut across open ground to the Botanical Gardens Reserve, which at the time was situated where the Burns Building at the University of Otago now stands.

A new interpretive sign has been erected, 150 years on, to tell this tall tale of two ''royal oaks''. The sign resides at the foot of just one of the trees, which was transplanted as a sapling to the site where it stands today. Its royal ''sibling'' was not so fortunate: it and many of the original plants were swept away by flooding before the botanic garden shifted to its current site in 1869. The Albany St site of the planting was marked by a graceful arch with tall fern sprays. There was a roped enclosure and two slight mounds with holes ready for the trees. Once the trees were planted, three cheers for the oaks were given, along with three cheers for Queen Victoria and three for the royal bride and groom. A band played the national anthem.

It is the speeches, though, that help explain why the celebrations were so lavish. James Turner, a member of the Town Board, requested that his speech be forwarded to Her Most Gracious Majesty, saying the people wished to ''give expression to their feelings of loyalty to her Majesty, and to the Constitution under which they have so long enjoyed the blessings of peace, liberty and justice''.

Superintendent John Hyde Harris planted the trees. He said: ''Although removed by so vast a distance from the Throne which we revere, our enthusiasm on the occasion of this auspicious event is not less than that which those of your Majesty's loyal subjects whose privilege it is more immediately to surround that Throne have displayed ... True, we cannot but as it were, catch the echoes of the expiring welcome offered to Alexandra in England; but we can take it up, and prolong it for a time.''

The crowd cheered. There seems to have been some regret that their antipodean celebrations were delayed, and an attempt to make up for this through sheer enthusiasm.

Mr Hyde Harris continued, regarding the passing on of the speeches to royalty, ''I feel sure ... that it will be a source of satisfaction to her Majesty to feel that here, at Britain's antipodes, she still lives in the hearts of loyal and devoted people''.

The Otago Witness went further. ''There were, perhaps, few cities in the old country that gave a more impressive or unique expression to their loyalty ... ''

Seven and a-half newspaper columns were dedicated to the event, concluding, ''The report we publish today of the rejoicings in Dunedin ... will be read in many homes in England; and we believe the assurance it affords will not be unwelcome, of the strong and lasting attachment of the people of Otago - and of New Zealand, of which it is the wealthiest and most populous province - to the throne and to the empire.''

It is easy to giggle at the way people used to do things. No doubt our descendants will do the same to us and in many cases, rightly so. But if you imagine that these early settlers were, at most, only 15 years departed from a home many would never return to, you can glimpse how it might have been.

Maybe they felt quite cut off - they seemed upset that their celebrations were delayed. They were slowly developing a different way of life, an amalgam of northern and southern hemisphere cultures, but maybe they were also homesick. Fifteen years down the track, maybe they were also worried that they would be forgotten.

Whatever the motivation, the day was about celebrating monarchy and the oaks were a key feature. Mr Hyde Harris hoped ''that when the last branch of the last survivor of them shall have fallen to the ground and become incorporated with its native soil - that then, and for ages afterwards the descendants of Albert Edward, Prince of Wales, and Alexandra of Denmark may sit upon the throne, may wear the Crown and may sway the sceptre of England over a loving people.''

Only one of the two oaks survives. After planting them, Mr Hyde Harris said, ''I trust that they will in all time be known and respected as 'The Royal Oaks'.''

He would be pleased that this is the name given to the surviving oak. It is a focal point for tomorrow's 150th birthday celebrations at Dunedin Botanic Garden. All are invited to join in, meeting at the information centre in the lower botanic garden at 11am.