Region of the perpendicular 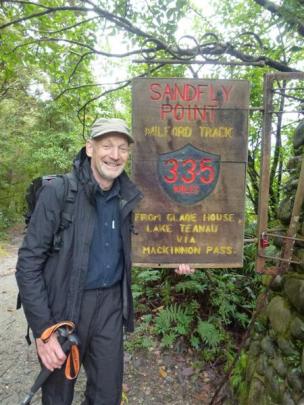 Neville Peat on the track. Photo by ODT.

The Milford Track in Fiordland is New Zealand's premier Great Walk. In late April, towards the end of the main season, Dunedin writer Neville Peat experienced its stunning scenery, convivial character and extreme weather, and along the way saluted its glorious tramping history.

As a strapline, it's a winner - ''The Finest Walk in the World''. It belongs to the Milford Track as naturally as moss to a damp log or rainbow trout to a mountain pool the colour of translucent greenstone.

The Tourist Hotel Corporation, which monopolised the Milford Track before the era of ''Freedom Walkers'' began 50 years ago this year, proudly used the superlative slogan in its advertising.

But the THC did not come up with it.

It was inspired by an English-born New Zealander, Blanche Edith Baughan, who was at the peak of her powers at the turn of the 20th century.

In 1908, Baughan wrote an article about the track in rambling poetic sentences.

After appearing in the Otago Witness, it turned up on the desk of a subeditor at the London Spectator who thought Baughan's suggested title for it, ''A Notable Walk'', did not live up to her lyrical descriptions.

Her title was changed to an eye-catching ''Finest Walk in the World'', and it stuck.

''Baughan dubbed the country through which the Milford region runs as ''truly the region of the perpendicular''.

As well as that, I think of this place as the mountains of water.

There have been many stories over the years of trampers wading waist deep in places to reach the next hut, their packs filled with clammy gear.

No such spectre entered my family's thoughts as we set off from the head of Lake Te Anau on a mild, eerily calm April day, with the lakeside mountains sporting scarfs of mist and tall beech forest shading the wide flat track.

We were away laughing on this autumn tramp with spring in our step, ''freedom walkers'' using the Department of Conservation huts.

A nuggety Scots surveyor-explorer, Quinton Mackinnon, came this way in September 1888 with Ernest Mitchell seeking a route to Milford Sound, which was by then on its way to world fame for its grandeur and waterfalls.

With avalanches ''continually rolling'', the hardy pair cut a trail - actually, the route had been known to Maori greenstone/pounamu hunters for centuries - up the Clinton Valley, over an alpine pass that would carry Mackinnon's name, and down the Arthur Valley to Milford Sound.

Already on the map near the head of the Arthur Valley were the stupendous Sutherland Falls, dropping 580m in three leaps, among the world's highest waterfalls.

In 1890, 125 years ago, Mackinnon became not only the first guide on the Milford Track but also a Fiordland legend.

The track is walked over four days via three huts, a distance of 54km.

The first day is a 90-minute doddle, especially as we have clear skies, the tops in view and shafts of sunlight creating a fairyland in the forest understorey.

The Clinton River is chuckling company.

At the first hut, Clinton, we meet Ross Harraway.

He is tall timber among the hut wardens at over six feet five inches (196cm), and a dab hand, too, at knocking up a batch of pikelets or date scones.

An outdoorsman and former milkman, Ross has been on track duty for 10 years.

Each evening, he takes trampers on a nature walk and gives a hut talk after dinner, conveying stories about the local fauna and flora, the landmarks and fool's gold.

There are 40 of us this night, a full complement, representing 14 nationalities.

Typical of Milford trekkers, the majority are from overseas and under 30 years of age.

The first physical challenge comes the next day, a 16.5km leg to Mintaro Hut that starts off at a pleasant grade then steepens later when you're least prepared for it.

Along the way, robins befriend us, rainbow trout cruise placid reaches of the river, and whio/blue ducks are here in good numbers too, protected by a stoat- and rat-trapping programme.

We scramble across 100m-wide beds of streams that run quietly, their massive boulders manoeuvred by floodwaters that are seemingly capable of moving mountains.

The day is unusually warm for April.

Something's in the balmy wind.

Mintaro's odd name comes from a small lake nearby.

It commemorates the visit of a Dunedin photographer, Frederick Mintaro Muir, who joined Mackinnon on his return journey to Lake Te Anau over the newly surveyed pass.

In the evening, Mintaro warden Tom Marston, a superfit young Englishman on a working holiday but keen to stay in New Zealand, gives us the news we didn't want to hear: the barometer is tumbling, and the forecast is bad: high winds on the pass, up to 80kmh, and a slow-moving band of heavy rain should hit us as well, dumping 200mm to 250mm at a rate of up to 25mm (one inch) an hour.

Nonetheless, he thinks we are a ''strong group'' and advises we leave by 7.30 the next morning in order to get over the pass and to the next hut, Dumpling, before 2pm.

Two weeks earlier, a group of 40 members of the Otago Tramping and Mountaineering Club arrived at Mintaro wet from decent rainfall but happily inspired by history.

In 1965, the club campaigned against the Tourist Hotel Corporation monopoly of the Milford Track for guided parties only.

This was Fiordland National Park and no-one, not even a government agency, ought to stop public access.

Three groups of protesters with tents, approaching from Lake Te Anau, Dore Pass and Milford Sound, made their presence felt over Easter 1965.

It worked, this ''Freedom Walkers'' protest.

The following year, the Fiordland National Park Board built three huts for public use, and those on the track today are still sometimes referred to as freedom walkers.

The 50th anniversary walkers, including nine original campaigners, had a brilliantly fine day crossing the pass.

Ours is a different experience. Setting out at daybreak, we ascend the famous zigzag on the side of the Clinton Canyon in steady rain, watching the tall beech forest diminish in height until, stunted by altitude and a cold climate, it gives way altogether to shrubs, herbs then finally tussock grasslands and alpine tarns.

The headwall of the valley is streaked with waterfalls.

These are the mountains of water.

Suddenly we break out on to the pass (1114m), and the cold gusting northerly is tearing at our rain jackets.

Tarns ripped by the gusts smoke with spume close to the precipice on the Arthur Valley side.

Ahead of us, one member of a party of six Iranian men from Auckland is ''parachuted'' by his pack cover off the track and into the tussocks.

Three of his mates leap on him.

For a minute or two they are too scared to get up in case they become airborne themselves.

This is no place for the weak or faint-hearted, and there is no turning back.

Appearing out of the gloom is the Pass Shelter where, inside, steam rises from trampers, their faces reddened by wind blasts.

The descent in this amount of wind and rain requires extreme caution, especially on the narrower and steeper rocky sections.

We reach the shelter of the treeline but the rain is heavier than ever.

There is no time to relax and rest over thermos drinks and energy food, the 2pm deadline looms.

The Arthur River, when we see it, is a banker already and we reach the hut with little more than an hour to spare before the track becomes riverbed.

Dumpling Hut's warden, Jen Haslam, checks we are all accounted for and warns us the rainfall is much heavier and more persistent than forecast.

Next morning, Jen confirms we are going nowhere.

In the eight years she has worked at Dumpling, rainfall has exceeded 400mm in 24 hours only four times.

Waterfalls are thundering on all sides, and the gravel pathways between the three buildings in the Dumpling complex are streaming water.

The woodburner is struggling to dry us out.

There's time to ponder. Why has the Department of Conservation not built covered ways to connect the buildings?

This is one of the world's wettest regions after all.

Then there are the facilities.

Everyone has a bunk but 40 in the dining room is a squeeze, with too few tables.

Perhaps it's time for some refurbishment at all three huts on this greatest of Great Walks.

Then there is the issue of weather information.

Why no weather station on Mackinnon Pass, at least an anemometer (to measure wind speed), transmitting real-time data to the wardens?

That's about $6000 a night for six months or just over $1 million a season without counting the contribution from the three-hut guided tours.

From such a revenue stream, surely some funds could be allocated to hut maintenance and safety in adverse weather.

For the second night, Jen produces welcome extra food from supplies left by trampers and takes on the role of quizmaster.

Cards and board games are popular.

Out of this shared adversity, bonhomie flourishes.

The Auckland Iranians dish out vacuum-packed baguettes filled with smoked salmon, a fresh-food treat after days of ''dehyd''.

Milford Track is a social leveller.

Next day, the rain has gone, wispy clouds lift from the mountainsides like sauna steam, and astonishingly the Arthur River has come down metres, a glassy green replacing a raging, roaring white.

The walk out, 18km, is delightful and over before we know it.

At well-named Sandfly Point, walk's end, we board the launch Anita Bay for the short trip to the Milford marina, the same launch that carried the Otago Tramping Club protesters 50 years earlier.

Thumbs up for their paving the way for us to enjoy a fine walk in a mountain wilderness.

Perhaps even the finest walk!