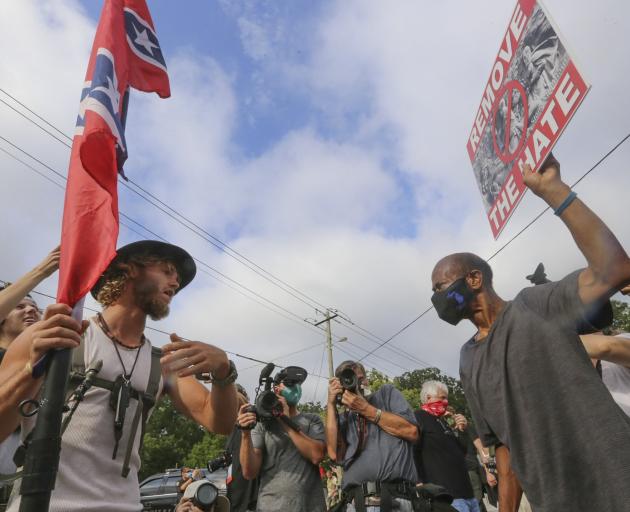 Protesters face off across the ideological divide in Georgia, US. PHOTO: TNS
We met in the summer of 1999 in Perth. We partied like it was, too. And we talked. Kat had The Book of Questions, which she gifted to me when one of us left, and through it we, and the rest of the flat, rehearsed some of life’s dilemmas. writes columnist Liz Breslin.

It’s good to talk. It was so fine to party. It’s funny to look back on the questions in The Book, if only because it was written, and we answered, in a pre-internet age, when we were young and unconnected, and certain.

There’s the one about whether you’d eat a bowl of crickets for $40,000, the one I forget which somehow got us jogging naked around Subiaco, and then number 142 which asks what, if anything, is too serious to laugh at? Pick a number between 1 and 218 as we sometimes still do over dinner at my place and chances are you’ll get a question about sex and death because what else is there really apart from truth, justice, equity, honesty, authenticity, freedom and love?

I was thinking about moral dilemmas this week because we were talking about buses. We were talking about buses because I was on one of those calls to the IT helpdesk where one of you (them) says polite things and the other one (me) asks random personal questions because people are interesting and days are long while you’re watching someone else remotely wave the cursor around on your laptop and you’re trying to concentrate on that instead of staring at the one cherry tree blossoming through snow outside.

Everyone on the bus had a mask, turns out. Everyone except for one person who got on and sat down without. And what did everyone else do, I wanted to know. And it reminded me of the time last year in Krakow when two guys got on the number 152 bus that a friend was on and started to chant and "sieg heil" salute and what would you do? And further back before even The Book was a thing in my life, I remember the guy at the bus stop on Wandsworth High St as I biked to work. It was a Tuesday, maybe 8am, peak traffic, and he was naked apart from a briefcase and shoes and he was sobbing so loud I could hear it from the other side of the road.

"Thanks be to being in the right place at the right time" was part of Kat’s inscription in the book. I do love a good inscription as much as I like a strong moral, though I’m not sure I believe in right times so much, only in the right choice of possible actions when we get there. Also, I’m not sure how much thinking about crunching a bowl of crickets (imagine the texture of their legs!) has helped me in any actual situation.

Unless we’ve had real-world structures and people set against us, or have been able to study drama or read widely or play collaborative or solo-player games with chewy dilemmas, or spend time discussing moral imperatives with friends, we don’t know how we’d react. We haven’t practised reacting. And, on the one hand, while it’s so annoying not to have the opportunity for a do-over, I certainly hope there won’t be a next time I see a guy in such distress as the Wandsworth bus shelter man was, being so ignored. But then we do, don’t we? We see that distress every day.

The IT guy said he wondered for a moment whether the unmasked person had a hidden camera and was actually recording people’s reaction and would you behave differently if they were? I might submit that as question 219.

None of us are alone in this and one thing’s for sure — more of us than not will come up against white supremacist b... masquerading as wholesome, billboarded, middle-class, middle-aged, middle-of-the-road munificence in the near future, so it’s timely to think, morally, mentally, physically, about how we might deal with that. I would like to sit with Kat and my flatmates, legs up the wall, and talk about this in the light and the weight of another twenty years, before we run out, naked, into the night.