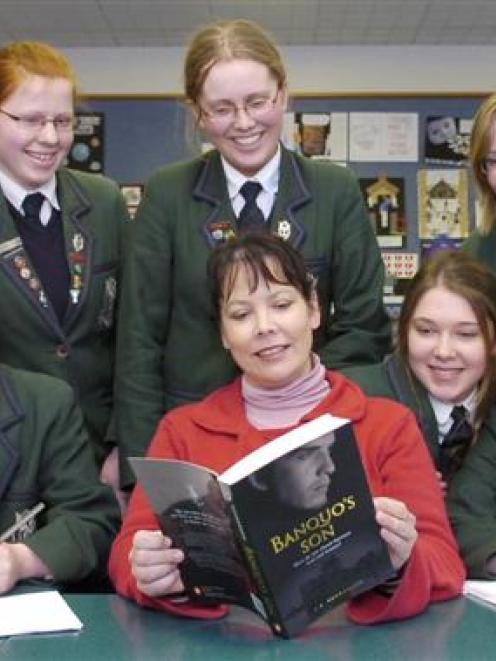 Tania Roxborogh (centre) with a copy of Banquo's Son and her Columba College advisers (front from left) Aimee King (16), Imogen Davis (15), Daniell Browne (15), Dannielle Hall (15), Flavia Wilson (15), (back from left) Laura Schep (15), Annie Welvaert (16), Penelope Couper (15). Photo by Jane Dawber.
Although she has had more than 20 books published in New Zealand, Tania Roxborogh is excited about the prospect of making it on to the international market at last. Charmian Smith talks to the Dunedin author and teacher about writing Banquo's Son, the first book of a trilogy sequel to Shakespeare's Macbeth.

The anticipation of an auction among international publishing houses for her trilogy - and perhaps even a film - is exciting for Dunedin author and teacher Tania Roxborogh.

Despite having had more than 20 books published, she feels she is finally achieving recognition, as Banquo's Son has been taken on by United States literary agency Writers House and an auction for the US rights will be held in early October.

It is expected to be published there in June next year and a hopefully a film released by the end of 2012. As part of the deal she is to be rebranded as T. K. Roxborogh, instead of Tania Roxborogh - it sounds more international, she says with a laugh.

The recognition also brought the pressure of a deadline, and Roxborogh says she could not have done it without help, including that of a group of her English pupils at Columba College and her friend, author Fleur Beale, she says.

Late last year, after a book she had written while 2006 writer in residence at the Dunedin College of Education was rejected by a publisher, she emailed the synopsis and first two chapters of Banquo's Son - a sequel to Shakespeare's Macbeth - to publishers. Vicky Marsden, of Penguin, replied enthusiastically and in December, the publishers accepted the book but wanted 120,000 words by March this year.

To meet the deadline, Roxborogh enlisted help from a small group of her 15-year-old pupils. She printed out sections as she wrote, posted them to the girls and they met a couple of times over the summer holidays to discuss the book.

"Their feedback was incredible," she says.

"First of all, they were really critical but specific in their criticism - they are very good readers, these kids. But also they were enthusiastic and passionate about the story, and I could see very quickly they began to own the story. It was early on they told me they were not sympathetic to Rosie (the hero's great love interest), so I had to rewrite her, because in my head I had her, but obviously I hadn't got her right."

Mostly they asked questions: How did this happen? I don't understand why? She knew the answers, but because she was writing so rapidly, she wasn't getting it all down, she says.

She also realised the story was going to be bigger than she first realised.

"In the first book, Fleance's object of desire is to be free from his father's ghost, but his overarching desire - his heart's desire - is to be with Rosie, so I had to think how that was going to work set within the history of England and Scotland."

The idea of writing a sequel to Shakespeare's Macbeth stemmed from her pupils' questions about how the witches' prophecies came true. They were the same questions that have puzzled her ever since she read Macbeth at high school, she says.

In the play, three witches predict Macbeth will become King of Scotland, but that Banquo, his relative, supporter and thane of Lochaber, will father a line of kings. Macbeth kills King Duncan to usurp the throne and later has Banquo murdered, but Banquo's 11-year-old son, Fleance, escapes. Eventually, in the play, Macbeth is killed and Duncan's son, Malcolm, becomes king.

"One night, I had a dream. I know it's a cliché but I honestly saw - like watching a movie - I saw this young man in the woods and I knew who he was and he was having these dreams. I didn't know all the answers but I knew somewhere were all the answers. There was a whole story there and I just needed to start asking the questions," Roxborogh says.

In Banquo's Son, Roxborogh tells the story of Fleance, starting about 10 years after his escape from his father's murderers - his last act in Macbeth. In Roxborogh's telling he is rescued by Magness and his wife, who are escaping the carnage of Scotland after the Battle of Dunsinane, in which Macbeth was defeated.

They live in northern England and Fleance grows up to become a skilled bowman and swordsman. He falls in love with Rosie, the daughter of a cooper in a nearby town, but is haunted in dreams by his father's ghost spurring him on to revenge.

So, before marrying Rosie, he goes on a quest to Scotland to avenge his father, but gets caught up with Donalbain, brother to King Malcolm, Donalbain's son Duncan and daughters, the beautiful Rachel and the young Bree, and Macduff, who killed Macbeth.

The three weird sisters appear again with their mysterious predictions that can be interpreted in different ways. After many intrigues, adventures and battles, the book ends with Fleance crowned king of Scotland, and telling Rosie he cannot marry her.

"Some of the characters are true, but it's Shakespeare's rewriting of history I've followed on from, not the real history. Yes, there was Malcolm; yes, there was Donalbain; yes, there was King Duncan and Macbeth, but actually the real history is Macbeth had as much claim to the throne as Duncan did. They had the same grandfather, and he reigned for quite a few years as a good king."

However, there appears no evidence for a historical Banquo, although there was a thane of Lochaber. Roxborogh has not found any historical connection between Banquo and Fleance, and Mary Queen of Scots and her son, James VI of Scotland, who became James I of England in 1603, and during whose reign Shakespeare wrote Macbeth, she says.

Writing a historical epic filled with numerous characters, she found she needed a big chart on her study wall to keep track of what they all did and what others say about them.

"I guess this is my theatresports training - you can't introduce an idea or object or person then have them disappear and not have them come back and deal with them."

She listed all the characters in the first book and put crosses beside the ones she planned to kill off in the second, which she is now writing - but some of them survived despite her best intentions, she says with a laugh.

"I just want to tell stories, and there are times when I'm reading through drafts and I go 'aargh, that's rubbish'. That's where you have a good editor who says, 'no, tighten this'. Fleur was great. She says, 'What can you see? What can you smell? Tell me about the battle'.

Nevertheless, she cried as she wrote some of the scenes, forcing herself to follow Fleur Beale's advice to be mean and stop rescuing her characters, she says.

Roxborogh's earlier books have been contemporary young adult fiction, textbooks, plays, parenting books and other non-fiction, so writing historical fiction set in Scotland almost a thousand years ago was a new challenge.

"I didn't know how hard it was. When you write social realism, you just take it out of what you know, but here you are trying to create a world that there's not a lot of information about."

There is little known about life in 11th-century Scotland, she says.

John Roxborogh, her brother-in-law and an expert in Scottish church history, was a great help, providing her with books and accounts of battles.

She found plans of Glamis Castle, where some of the action is set, and learned that the Scots of the time wore mostly animal skins and woollen cloth, as they did not yet have the technology to weave tartans and make kilts.

"I pictured in my head that they'd all be trundling along in their wagons, but the roads weren't developed. There were some Roman roads, but not up in Scotland."

Instead, people either walked, rode horses or sailed around the coast, as some of her characters do.

However, this is fiction and whatever the realities of hygiene at the time, we want our hero and heroines to have nice clean teeth, she says with a laugh.

Although Roxborogh (44) is approaching an international writing career she does not intend to give up teaching.

"I need to be teaching, because the kids are my sounding board and I think I'd be isolated or lonely if I didn't have it. If I was to paint the ideal picture, I might drop a couple of classes, but if that meant giving up my job, I'd rather just keep going with my job."

As with many writers for children and young adults, she values contact with her pupils.

"One might argue that I've got a bit skewed because I'm in an integrated private girls' Presbyterian school, but I'm with readers and I'm exposed to being part of the English teaching community, and exposed to the wider concerns of other English teachers around the country," she says.

Another advantage of involving her pupils is they communicate with other teenagers on Facebook and Twitter. She also runs her own blog, banquosson.blogspot.com. The internet gets the word out more widely than any public-relations firm could, she says. She has already had emails from people in the United States wanting to know where they can get copies of Banquo's Son.