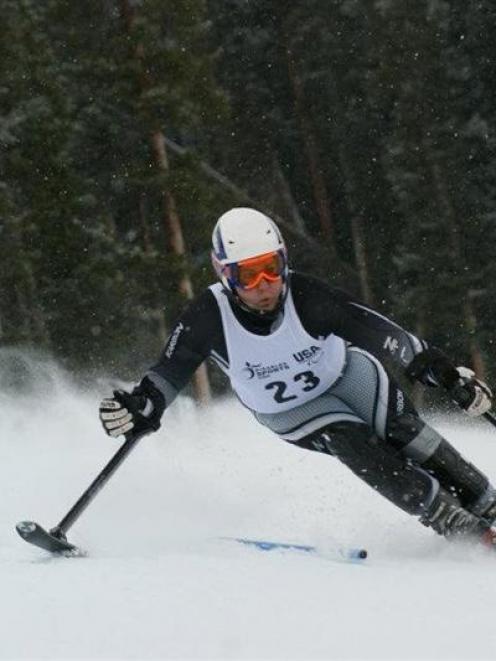 New training methods and technology are paying off for skier Adam Hall, who has had his most successful season since winning Paralympic gold.

The former Otago Daily Times Class Act recipient won four races on the World Cup circuit earlier this year, regaining his No.1 status in slalom and being ranked in the top three in the world in both super G and super combined.

"We've made some big breakthroughs. To have four World Cup wins, not just podiums, was pretty cool."

The 25-year-old is speaking from Wanaka, where he is in the gym five or six days a week, working on getting stronger and fitter. Today, like four other days this week, he has been on the mountain since 7am and soon he will have a Pilates session, followed by muscle testing.

In two weeks, he will return to Colorado for his ninth consecutive winter and the next season's competition, including the world championships in Spain.

The schedule leading up to the 2014 Paralympic Winter Games in Sochi, Russia, sounds relentless but Hall, who has spina bifida, has always believed in the value of hard work.

"You don't just turn up to the Olympics and win a gold medal. You prepare the best you possibly can and go in with full confidence ... "

Looking back on his build-up to the 2010 Paralympics in Vancouver, the former Taieri College pupil finds it hard to believe that he gained gold in the men's standing slalom, blitzing his opening run and rebounding from a fall in the second.

" It was more on sheer grit, guts and the good old Kiwi attitude of hard work, whereas now we're putting some more science behind it ... and it's got me to the next level."

In the New Zealand winter, Hall relocates from Colorado to Cardrona, where he first got up on skis at the age of 6.

At 9, he tried snowboarding and found the independence he had always wanted, but the sport was not at the Olympics so he switched back to skis in 2004 when he decided that was where he wanted to compete.

Spina bifida is the world's most common neural tube defect, similar to an incomplete spinal fracture, he says, adding that he uses a connecting strap to keep his tips aligned and ski-pole outriggers for balance.

"I'm pretty much able to use a lot of my body, but I don't have much control from my knees down and I don't have any feeling in my feet."

"The great thing about adaptive sports throughout the world, especially with me, is even though I have a disability, we don't really know what the limits are. So we just keep pushing and trying different things to see if we can trigger something or get something firing muscle-wise ..."

Now studying agribusiness management through the Open Polytechnic, he attributes some of his success to not being wrapped in cottonwool as a child: "I was pushed to go and work and to give anything and everything a go."

The gold medal and his 2011 New Zealand Order of Merit for services to sport have been the best moments in the past few years; the death of his mother, Gayle, in a car crash near the family's Woodside home just a week after returning from Vancouver an obvious low.

"When things like that happen, everybody has their good days and their bad days, especially early on."

When Hall talks to members of the public, the message is invariably about following dreams and never giving up.

"I guess that relates back to my second run in Vancouver when I fell down," he says.

"A lot of athletes in that position would have given up and pulled out, whereas I got back up and won a gold medal. If I didn't do that, it would have been the unknown."