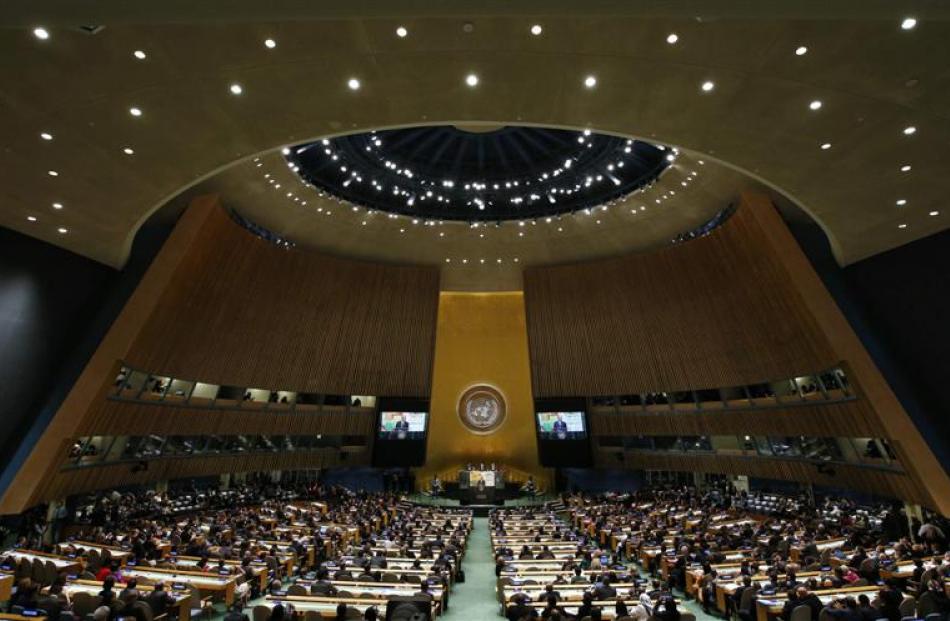 It's crunch time for climate change but the memo does not appear to have reached the Government, writes Tom McKinlay.

Speaker after speaker in a near capacity Glenroy Auditorium called for more action from the Government, pausing only to tear strips off the Ministry for the Environment officials responsible for the consultation document accompanying the process.

The Dunedin meeting was one of 15 up and down the country called as part of the Government's effort to set a target for cutting greenhouse gas emissions, beyond 2020, to take to the United Nations climate change summit in Paris later this year.

Informing the submission process is a Ministry for the Environment document, New Zealand's Climate Change Target. It's a slim volume, light on science. And it was clear it impressed few at the meeting.

Others share the concern and what it might say about the New Zealand Government's approach at the Paris talks and commitment to tackling the issue at home.

Professor of public policy at Victoria, University of Wellington, Jonathan Boston, a researcher on the topic of climate change, is among the critics.

''I have to say I was disappointed in the document for a variety of reasons,'' he says.

Among them is that the document does not suggest a target for the post 2020 period.

''I thought the Government might put up some draft proposals for discussion or at least some sort of range, 10 to 20 or something, and then get feedback. It hasn't proposed a target at all or a set of targets.''

Neither does it set out what New Zealand's emissions pathway is likely to be without action, nor spend much time on what is required to preserve the Earth's climate within 2degC of warming. The figure of 2degC is considered important, as beyond that point it might not be possible to rein in runaway climate change.

Prof Boston says the ministry's discussion of what a fair contribution from New Zealand might look like is also deficient, as it does not address the principle of ''polluter pays''.

As a wealthy developed nation, New Zealand carries a disproportionate responsibility for the accumulated CO2 in the atmosphere to date.

Paris is widely regarded as crunch time for climate change, perhaps the last chance for a climate deal.

Emeritus Prof Bob Lloyd, an energy expert recently retired from the University of Otago physics department, says the world needs to reduce all fossil fuel consumption by 5% per year starting at the end of this year to stay within 2degC.

Cuts of that size would allow the world to stick to a carbon budget (of emitting no more than about 900 gigatonnes of CO2 from here on in) and arrive at zero emissions by 2050. According to the models, that provides a two in three chance of avoiding warming of more than 2degC.

Waiting until 2020 to start means the target increases to 7% a year, Prof Lloyd says.

The Government must set a target, or ''intended nationally determined contribution'' (INDC), in the coming months under the United Nations Framework Convention on Climate Change, before the Paris meeting in December. There, the intention is to negotiate a new legally binding international agreement to replace the Kyoto Protocol.

As things stand, New Zealand has a commitment to reduce emissions 5% below 1990 levels by 2020, and will be expected to be more ambitious in Paris. However, since 1990, New Zealand's total greenhouse gas emissions have grown by about 21%.

The Dunedin City Council's draft submission, agreed this week, takes up the argument that mitigating climate change now, by cutting emissions, will head off greater costs of adapting to a warmer world.

As evidence, the council offers its estimate that the $10 million cost of protecting low lying areas of the city from sea level rise could balloon to $150 million if unrestrained global warming leads to yet higher seas.

During Monday's council meeting, the council strengthened its submission in a number of areas at the urging of Cr Jinty MacTavish, including a request that, whatever target is adopted, an associated action plan to achieve the target is developed and regularly reported against.

The council also referenced the Government's previously stated support for international agreements seeking to limit global warming to 2degC above pre industrial levels, and requested that the Government's target be consistent with the degree of global action required to achieve this.

Prof Boston says it is a problem that the ministry discussion document makes no mention of the Government's previously stated target of a 50% cut in emissions by 2050.

''I thought that was remarkable, because it was this Government that introduced this target, it was not the previous Government, and really ever since the Government introduced that target in its first term we have hardly had any mention of it,'' Prof Boston said.

Were the Government committed to the target, it might have been expected to lay out how it intended to move towards it from 2020.

''But it didn't, completely silent. It is quite remarkable really.''

The country has a fundamental problem, he says.

''We have an emasculated emissions trading scheme which has been constantly modified so that it will achieve very little, we have not been prepared to address the problem of agricultural emissions head on - we have agreed to invest in research but really to do very little else - and we have a problem that for the last six and a half to seven years the Government has barely talked about climate change and what to do about it.''

The Prime Minister has hardly uttered a word on the topic.

Both Prof Boston, the DCC submission and many at the Glenroy submission meeting said the ministry document, and by extension, the Government, were making too little of the potential benefits of tackling climate change. An example often raised is the health benefits of better insulated, warmer homes, that require less energy to heat.

Prof Boston says that indicates the different between 5% and 40% is relatively small, in terms of cost.

''In other words, it seems to cost quite a lot, from this particular analysis, to get to 5 but not a great deal more to get to 40. One of the things that puzzles me is that the document doesn't discuss, for the benefit of the reader, why that is so.''

Prof Boston says New Zealand will not be influential in Paris. The big players, the US, China, Europe and others, will dominate. But New Zealand's reputation is at stake, its standing as a good international citizen.

''What we offer will be subject to close scrutiny, so we do run the risk of embarrassing ourselves if what we propose is deemed by the rest of the world as too little.''

Submissions on what New Zealand's climate change target (INDC) after 2020 should be will be accepted at the Ministry for the Environment until Wednesday at 5pm.

The discussion document, New Zealand's Climate Change Target, is available on the Ministry for the Environment's website, as is an online submission form.

Submissions can also be sent to climate.contribution@mfe.govt.nz or Climate Change Contribution Consultation, Ministry for the Environment, PO Box 10362, Wellington 6143.

Canada intends to reduce its greenhouse gas emissions by 30% below 2005 levels by 2030.