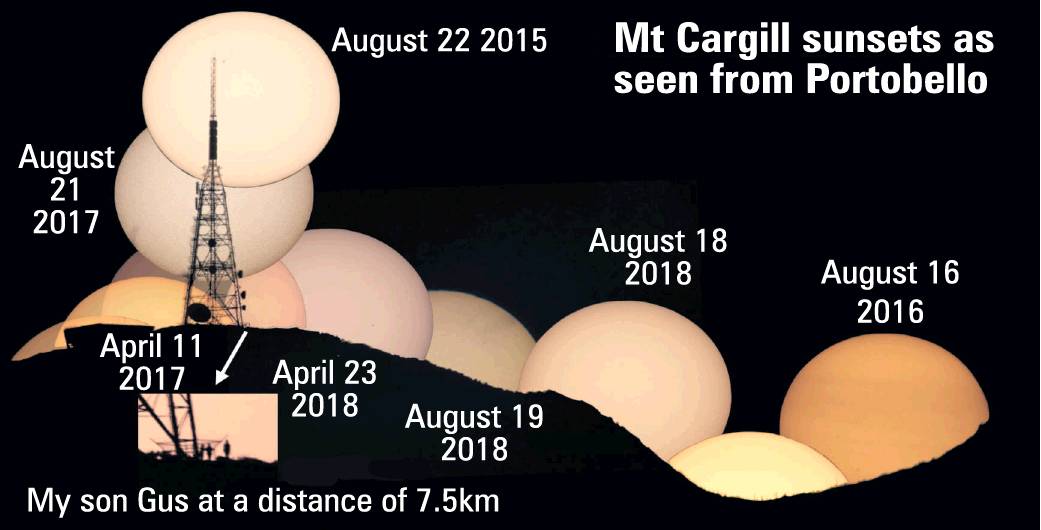 Eppur si muove (''and yet it moves'') is a phrase attributed to the astronomer Galileo Galilei in 1633 after being forced to recant his claims that the earth moves around the sun.

One of the joys of living in Portobello is watching the sun set behind hills on the other side of Otago Harbour. The vistas can be mesmerising, the merest presence of clouds transforming the scene with a glorious blaze of colour.

Using the compass on my mobile phone, I have been measuring the bearing or azimuth angle of the sunset. Over the course of a year, I have noted that it varies from azimuth 303 degrees (northwest by west) in June to an azimuth 234 degrees (southwest by west) in December. This change occurs because the earth's rotation axis is tilted relative to the plane of our orbit around the sun.

Each year, in April and August, the annual motion of the sun back and forth along the horizon causes it to set behind the 104m antenna atop Mount Cargill as seen from my garden.

The ''Mount Cargill Sunset'' is a significant occasion in the Griffin family social calendar, and family members always make a point of getting home early from work to observe the event. To my mind, it's the Portobello version of watching the sun rise over the heel stone at Stonehenge. But I digress.

Over the past three years, as weather has allowed, I have photographed the sun setting behind the antenna. To spice things up, last year on the appropriate day, with nearly perfect conditions forecast, I even persuaded my son, Gus, to stand beneath the antenna as the sun set behind him, which made for a unique family portrait!

In a moment of inspiration (or perhaps madness!), last week I decided to combine the various pictures I had taken over the past three years; I realised that I had built up a complete panorama of the summit of Mount Cargill backlit by the changing position of the setting sun.

I like to think Galileo would be happy if he saw this picture.