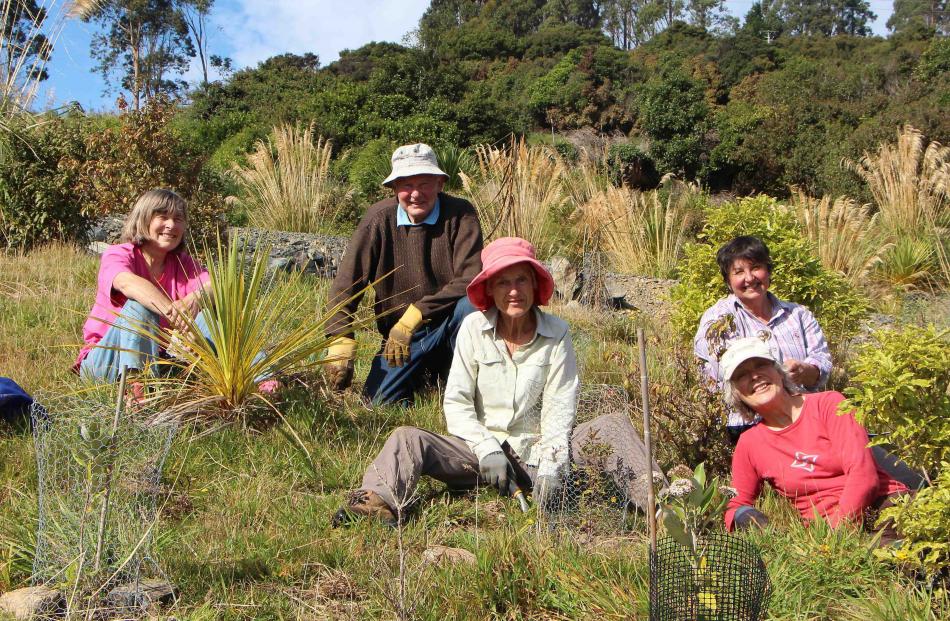 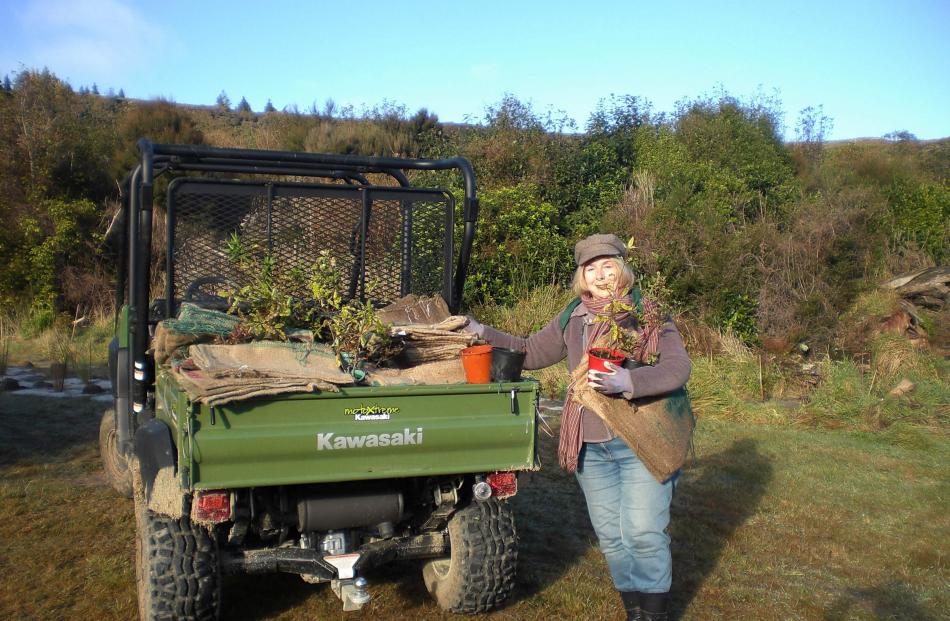 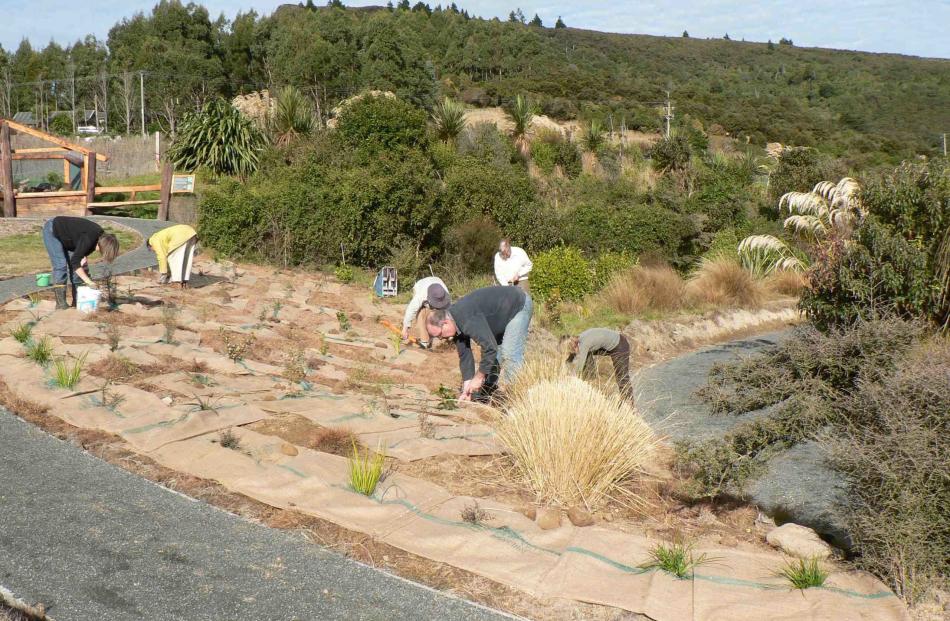 A neat job done: the Monday planters have the new plants in and weed mats pegged down. 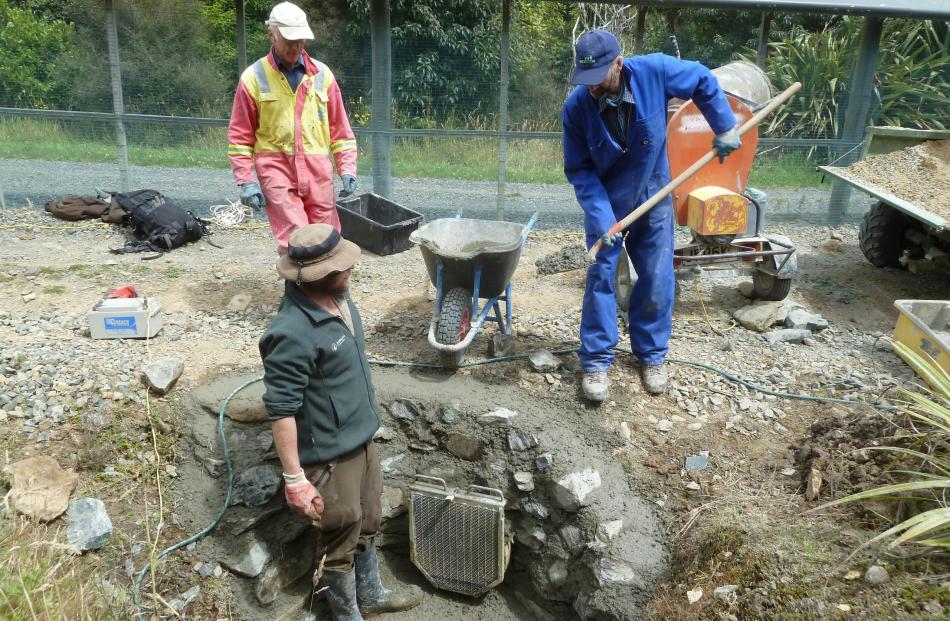 The efforts of volunteers from all spheres are acknowledged nationwide later this month. Here, a few of Orokonui Ecosantuary’s tell of the rewards of volunteering.

A neat job done: the Monday planters have the new plants in and weed mats pegged down.

When people ask volunteers "What do you do out at Orokonui?" the answers might not sound all that enticing: planting, and pegging weedmats to the ground; hours of weeding of young trees and plants; traipsing kilometres of often wet and muddy tracks, bending down to put a card in trakka-tunnels every 50m, then collecting them  again a week later; walking the nearly 9km length of the fence peering at the mesh looking for faults; digging through hard ground or rock to pour concrete or place rocks for one of the many infrastructure projects; digging up gorse and blackberry by hand, where spraying is not permitted because of the possible presence of tuatara.

And yet a large team of volunteers comes back week after week to continue the tasks. Some of the jobs — such as feeding the takahe — are more obviously enjoyable and rewarding. Yet every volunteer can tell you of the delights that reward him or her in the course of their work.

Everybody has a takahe moment. Our birds have distinct personalities. Quammen the male is the hungry one, always first to come running when he thinks food is approaching. He will run out of the tussocks when called, pursued by the two chicks, who have learned the need to get to the hopper before Dad scoffs the lot.

Mum Paku comes along behind, and even now will stop in the midst of feeding to pass food to one of her nearly full-grown young ones. Perhaps she sometimes misses out on her share of the pellets, as Brenda filmed her recently, well after feeding time, grabbing the hopper with her beak, shaking and pulling at it vigorously, as if to persuade it to give up any last morsel.

Justine, who feeds the birds on a Sunday, tells of the magic of a moment alone with them: ‘‘One Sunday the weather was truly grim — a chilling swirling mist — and at 11am there were no humans to be seen, those fickle creatures of comfort!’’Finding herself alone with the takahe family moved her to poetry:7 billion of me, 300 of youBut today one of meAnd 4 of you.

The takahe are the perfect advocacy birds. Always there for the visitors and unafraid of people. That characteristic, shared by all the wildlife, gives enormous pleasure.

Hilary, who inspects the fence on a weekly basis, recalls a day when "Mr Roto landed on the hood beside me as I walked the fence and hopped down to my shoulder to give me a rather too prolonged and enthusiastic ‘facial’."

And on another occasion, "when I was weeding the gravel fringe round the inside edge of the Otago skink enclosure, a skink took up position peering over the edge of a rock just a foot or so from my hands and jumped down to capture every slater or spider I disturbed. In both cases it was the beautiful creature’s total lack of fear that was a delight."

The kaka, whose numbers are increasing, constantly delight. The bird-feeder volunteers are regularly greeted when putting out the supplementary food for them. Susan one day found five birds waiting at the first feeder, "then as I turned my back and went through the crèche gate, they followed one by one, flying down that avenue. Just to have them over your head and to see that beautiful swooping was magical". Sometimes one gets to see what seems like very private behaviour: recently, I saw two of this year’s juveniles engaging in mutual preening. But kaka are also flocking birds. One Monday morning, as the weeding team arrived for work, a flight of about 20 birds was providing a magnificent aerial display high over the valley, a sight now only seldom seen in the wild. Night-time offers its own experiences. While listening for kiwi calls, around midnight, Maree spotted "an enormous tuatara making its way along the inside of the fence, quite unperturbed".

Again, "at the time of [kakapo] Sirocco’s visit I was helping as a guide, and the people in our group that night got two rare birds for the price of one: a kiwi came out of the bush across the track in front of us, rustled around in the bush, then came out and recrossed our track. That was almost better than Sirocco!"

Another night Sirocco’s visitors had a morepork calling and flying right over his enclosure as they watched. Maree’s team spends a lot of time tending the plantings around the visitor centre. They have repeatedly been surprised by the finds they have made while planting: a little whistling tree frog nestling at the bottom of a pot when the plant was turned out; frogs sitting on a leaf sunning themselves by the ponds, or being croaked at by a bell-frog when weeding the ponds under the visitor centre; Marie has been delighted by unexpected orchid finds that send her delving into specialist books to identify them.

Satisfaction is felt from acquiring new knowledge, but also from being able to use skills from a former life. Jeff writes with an ironic smile of his transition from farmer to volunteer: "As an ex-farmer I have noted that the bulk of my farming career was spent building one-metre high fences for sheep and cattle. I have now "progressed" to building 800mm-high fences for young kiwis and then on to 400mm-high fences for skinks and I wonder which creature [conservation manager] Elton [Smith] wants us to fence in (or out) next?"

Whether alone, or as part of a team, every volunteer finds pleasure and reward for the effort and time spent in the ecosanctuary.

Noelene recalls one very special shared delight: "I remember our first Christmas celebration for volunteers, when Matt invited us out to hear the dawn chorus. We left town about half-past four and got out here, went into the bush and just stood and listened. The kaka were flying around freely and the dawn chorus was fantastic, building to a crescendo. Then suddenly it stopped and it was all over."

Those are the moments when we all know our efforts are truly worthwhile.