Wanaka dogs had their day earlier 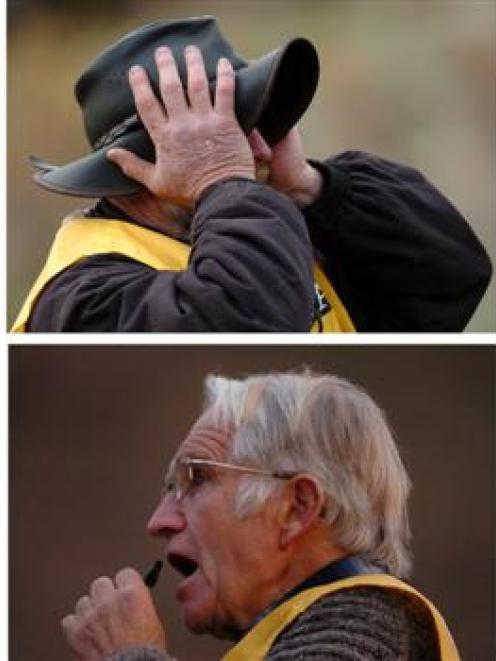 Clockwise from left are, Alex Sheridan, Tuatapere, Aussie Wettenhall, Oamaru, Glenn Tomlinson, Queenstown, Ann Flood, Wairoa, Lex Couper, Amberley and Simon Inkersall from TeAnau. Photos by Stephen Jaquiery.
In a case of "get in behind", all other claims to primacy in the dog-trialling stakes may have to give way to Wanaka, as Jim Sullivan reports.

Pinning down the date of New Zealand's first dog trial is a bit like penning half-a-dozen wild ewes using an untrained chihuahua, but it seems Otago has a good claim to have pioneered the pastime.

International publications say that the first trials in the world were held at Bala in Wales in 1876 but that can be discarded, just as the Welsh have chosen to discard Bob Dean's try in the 1905 test against the All Blacks.

The 1966 Encyclopaedia of New Zealand gives the award to an event held at Hakataramea in 1889, although trials held at Duntroon in 1878 are well-documented.

Some years ago, respected agricultural writer the late Neil Rennie came across a report in the North Otago Times of July 9, 1869 of a trial held at Wanaka which was described as "the third annual Wanaka trial" indicating that the first Wanaka trial must have been in 1867, but Rennie noted the 1867 trial "was not reported in the press".

However, another trawl through the North Otago Times for 1867 reveals full coverage of the first Wanaka trial on April 18, 1867.

It was held at Henry Campbell's Wanaka Station and attracted 15 entries. It was noted that a number of the "fair sex" were present, referring to the spectators rather than the bitches, we presume!

The promoters had put up a first prize of ₤5 and "each shepherd, with his dog, was required to drive three wild hill wethers, turned out of a yard, about a quarter of a mile, put them in a yard of five hurdles, without a wing, and return them to the starting place within 30 minutes".

The winner was John Craig's Sweep.

The correspondent who supplied the information to the North Otago Times was an experienced shepherd who stated, "it is the first trial of the kind I have heard of in New Zealand" and, using the pen-name Dumfries, included scathing comments about the "dog tax" imposed by the Government on working dogs, on the uselessness of some men who called themselves shepherds but had no idea of how to train a good sheepdog and on the runholders who employed such inferior men and dogs simply because they would work for lower wages.

"It seems to me that the majority of employers make but little distinction between the man who is really a shepherd - who has been brought up to it, I may say, from childhood, and never followed any other occupation - and the man, who with a good stock of what is colonially termed "cheek", gets a long stick in his hand and any kind of a mangy cur at his heels, and calls himself a shepherd, at the same time knowing as much about sheep as he does of the "man in the moon".

Another Wanaka dog trial was held the following year, with 11 competitors, and O. McCallum's Help was the winner.

The 1869 trial introduced some refinements with two small mobs of sheep having to be handled at once. From the eight entrants, O. McCallum's Spring took the first prize of 10 sovereigns.

Whether the distinctive "licensed booth" had appeared by this time is not recorded, but after the trial about 60 people "adjourned to the Wanaka Hotel for an excellent dinner, Mr H. Campbell in the chair and Mr H. S. Thomson in the vice-chair, after which the prizes were awarded, and all seemed to enjoy themselves right well".

It may well be that trials were held in some other sheep-farming areas, like Southland or Canterbury, earlier than the 1867 Wanaka trial.

Porangahau in Hawkes Bay is usually named as the site of the first trial in the North Island, in 1892, while "the 1870s" is often suggested as the start of the sport in Australia and "sport" it is as, as on October 4, a transtasman test will be held under lights at Launceston, Tasmania.

In the meantime, Wanaka seems to have a strong case for claiming to be the birthplace of dog-trialling in New Zealand, if not the world.

• Jim Sullivan is a Dunedin historian.