What (not) to wear 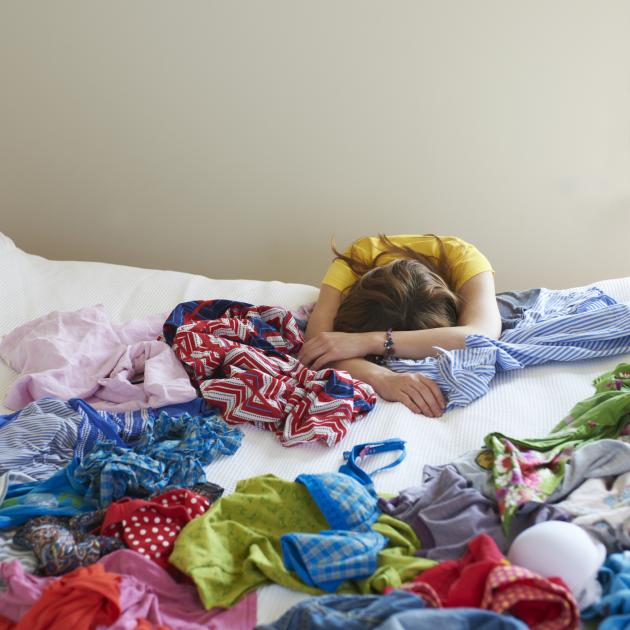 Photo: Getty Images
You pick out your outfit the night before, to save time and also to quell the questions running around your mind, writes Liz Breslin. You’re going for sporty and clean cut, with an arty edge. Pants, because you haven’t shaved your legs. You’ve checked the weather so you know that you’ll probably be fine in a little singlet, except would that show too much cleavage? You don’t want anyone to think you’re a slut so a shirt maybe, or actually that one’s got kind of tight so a baggy T-shirt, then. That’s safest. It’s great. It’s fine. Though it could be a little too informal. And it’s not like you ever saw that band. So someone might ask how the gig was or what’s your favourite song of theirs and then think you an imposter. There is a mountain of cotton on your floor.

The average woman spends about a quarter of an hour a day deciding on what to wear, which is weeks of a life, which is less time than some people spend editing selfies, which is another dimension entirely. You resolve to think of yourself as above average and rise above society’s criticism, though, gross, not in those pants. The panic is rising with the pile of clothes and you have nothing to wear and everybody hates you and it’s going to be a very long day.

Some days you get it right and you leave the house with your collar up and your hair at the exact jaunty angle you were hoping for. You are a boss. Except, once in the company of other human beings, you discover that your hair is in fact very wrong, your skirt, very terrible and your clearly-not-even-slutty-enough shirt is in fact plainly bossy and all the people everywhere, even and especially the ones that have never met you, are judging the heck out of your poor clothing choices. What were you even thinking?

You make it through the day somehow and it’s time for round two in front of the mirror before going out for the evening. Added bonus: remember to worry about your footwear and the juxtaposition between chic and the ability to run away. You talk with your friends while hugging your fashion misdemeanours close under the table. You discuss how good it could be to have someone come and do your colours and tell you, definitively, how to be first in best dressed to kill.

Also, you want your heart on your sleeve. You can’t bear the thought of all your mistaken purchases haunting you from the depths of landfill, leaching their cheap and nasty dyes into the rivers, turning themselves into microplastics to choke everything that is fishy and wholesome and marine. You resolve to buy sustainable with a capital S so that when people throw you a look that says that is a clearly a sack you are wearing, you can be all righteous because you, you are sustainably sacky. You remember that the most sustainable garment is the one already in your wardrobe. You swear only a little bit under your breath. Because you’re trying. You’re trying your best. And at least you shop second hand, which is not a given, because plenty of your friends think they’ll catch diseases that way.

You sleep in the band T-shirt. You get up again. You rinse. You repeat. You think about doing something to reset your vision, like the Six Items Challenge you heard about at Wanaka Wastebusters, wearing only six items in rotation over a period of six weeks. You look down. There are way more than six items decorating your floor. Something, you think, has to change.