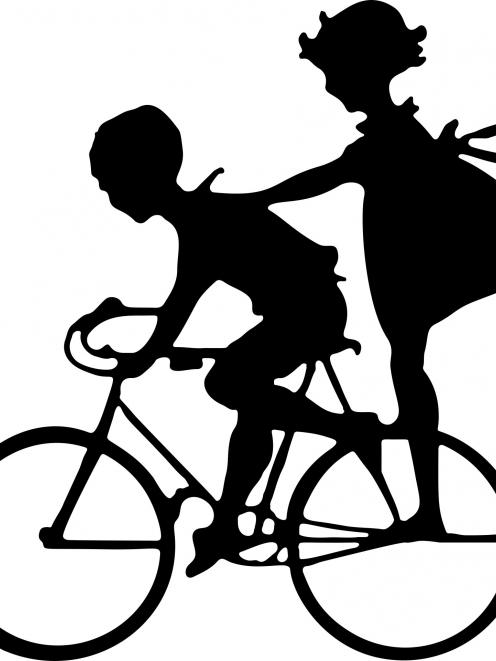 It’s the middle of the 1948 polio epidemic. Young Joyce and her brother Pete are excited to be allowed out of the house, in defiance of the restrictions on children playing together, to meet Pete’s friend Bill. Dunedin poet and author Sue Wootton continues the story...

Pete's already got his bike out by the time I fly down the steps again. He’s packing his cricket bat into the saddlebag. ‘‘Dub me?’’

I’m already stuffing my cardigan on top of his bat.‘

We ride along the middle of the empty road. My friends are inside their houses, doing Correspondence I suppose, with their mothers standing over them whistling through their teeth or sighing. Except for Helen’s mother. She used to be a teacher before she got married, and she offered to teach all of us. She telephoned all the other mothers, said we could use the great big table in their dining room, so we wouldn’t have to sit too close to each other. It makes me sad to think of Helen all by herself doing her lessons at that table. We zoom past Helen’s place now. There are two rooms that overlook the street. Is Helen in one of them? Maybe I’ll come back later today and stand on the street and shout until she comes out.

We pedal through the school gates, and glide to a halt. I slide off the bike. The playground seems much bigger than I remember. Maybe it’s the quiet. The sun beats down.

My head itches, and I scratch. Right then I realise a terrible fact  we’ve forgotten our hats.

Pete swipes his hand across the back of his neck and quickly checks his palm for germs.

"But let’s go back by Bill’s place. We’ll tell him to meet us at the beach."

Off we go, Pete’s strong knuckles on the handlebars, his legs pumping, his breath against my ear. We’re sweeping around the corner into Pururi Street, Bill’s street, two blocks from our place, and Pete misjudges the angle. The front wheel whacks the kerb. Ka-boomph! We’re slewing, tipping, sliding with the bike along the road. I’m spat out, and find myself lying on the dry grass verge. Here comes Mrs Lacey, Bill’s mum, barrelling down their front path. She picks me up and sets me on my feet. I sway, but stand. An ambulance comes around the corner and crawls along the street towards us. I must be really hurt if she phoned an ambulance. I’ll have to go to hospital. I’ll have to have an operation. I’ll have to — where’s Pete? Here he comes, pushing the bike. He’s fine, not a scratch. My knee is bleeding. I can see small stones wedged under a loose flap of skin. The stinging begins. But I don’t need an ambulance. I just want Mum.

She’s not looking at me. She’s got her hands in the air, she’s calling to the ambulance driver. "Here," she says.

And I step back from her, my own hands outstretched against her. Step back, step back, one, two, three, away, away. I look past Mrs Lacey, and sure enough, there’s a notice on their door, and though I’m not close enough to sound those long words out, I know what they must say. INFANTILE PARALYSIS. DO NOT ENTER. Two men have climbed out of the ambulance, and they’ve opened the back door, and they’re sliding out a brown stretcher, a red blanket folded on top.  No-one says anything. The men take one end each of the stretcher and they follow Mrs Lacey up the path. They ignore the sign and they go in.

A face appears at the kitchen window. Its Bill. Pete raises his hand. Bill raises his and puts it flat on the glass. The front door opens, and the ambulance men come out, walking fast, carrying the stretcher back to the ambulance. The red blanket is pulled up to Irene’s chin. Her eyes are closed. Mrs Lacey scurries to keep up. The men slide Irene into the ambulance. Mrs Lacey puts one foot on the step to follow. The ambulance driver, coming out, puts his hand on her shoulder.

She steps backwards, sort of dazed. He swings one door closed, and then the other. The handle locks down, clunk. He’s in the driver’s seat before I see how he got there. The engine starts up, the ambulance moves away.

He pushes the bike and I hobble alongside. We look back only once, just before we turn on to Rata Street for the short cut to Paradise Crescent. Mrs Lacey is still standing by their letter box, staring at the spot at the end of Pururi Street where the ambulance vanished.

I don’t cry, even when we get to our gate. The smell of bleach, which is the smell of this horrible long summer, hits us as we come up the steps to the back door. There’s our mother, standing on the damp linoleum, one hand on the mop, the other on the small of her back. At first she doesn’t see us properly "I said don’t come back till tea time!" she snaps.

We turn, and with my first step she notices I’m limping. Her hands fly to her mouth.

"We came off the bike, that’s all, and Joycie got road-burn."

Mum’s kneeling on the floor in front of me, arms clapped around my middle.

Now I get ready to bawl. Mum’s brisk.

"No blubbering Joyce. If you wake Edith! Let’s clean this and get a plaster on it."

And to Pete: "I could wallop you. Why don’t you be more careful?"

"We forgot our hats," says Pete, "so we were coming back for them."

I trail Mum to the wash house. She pulls my dress over my head and plonks me in the stone tub, cold under my feet. She reaches to the shelf for the Mercurochrome bottle. I whimper.

"Enough of that," says Mum sharply.

"Where did this happen?"

And I see Irene Lacey vanishing into the back of the ambulance, Bill’s face at the closed window, Mrs Lacey alone on the street. I see the quarantine notice on their front door. I think of Peggy-Peg-Leg, and two in the lung in the hospital, and I think of Vi, summer sick in our bedroom. I look over our mother’s shoulder through the wash house door into the back yard at 11 Paradise Crescent — which any map will show is only a hop, skip and a jump from Pururi Street, or from the pool, or from the beach, or from the school — where Pete is mooching slowly over the grass, lost in his own train of thoughts. His foot kicks out — automatically, entirely of its own accord — to decapitate a fluff-headed dandelion. He mooches on, oblivious, but I see the seeds lift and scatter, each afloat now on its own current. No story starts clean. Each bursts out of another, pulling with it a legacy of love and trouble. I take a breath.

And my mother, horrified, in a low voice replies, "Vi."