A brown bear catches a salmon. PHOTOS: GETTY IMAGES
Tongass National Park is one of the world’s great, unspoiled forests, writes Mike MacEacheran. And it’s home to more brown bears than anywhere else on the planet.

Through the droplets on the binoculars, some distance away, two unidentifiable creatures appear to be wading across the tidal creek. Deer? Wolf? Moose? A faraway brown bear and cub, in fact. We watch as the maple-brown carnivores lumber straight for our group, swallowing up the space between us. Their determined pace hints at a head-on meeting. The tone of our guide, Peter Robertson, suggests all we need to do is keep quiet and sit stock-still. I can’t help but fidget.

A bald eagle takes flight from a bushy pine and the sea grass trembles as two black-tail Sitka deer scamper past at a gallop. To our left runs a river, at our backs is a vast belt of ancient forest and dark mountains that hide the densest concentration of brown bears on Earth. Knowing this sets my jaw a little tighter.

As wildlife-watching locations go, Tongass National Forest in the panhandle of southeast Alaska is hard to beat. An unfathomable 16.7million acres of old-growth spruce, hemlock and cedar, as well as glacial fiords, rivers and valleys, it is North America’s largest forest — 20 times the size of Yosemite National Park and as big as Ireland. 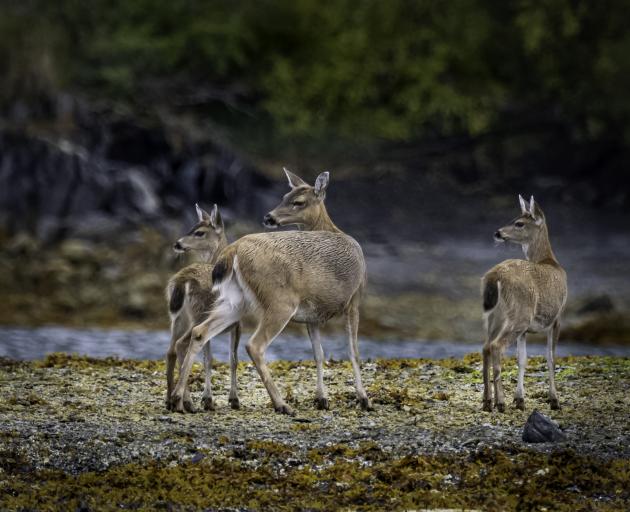 Sitka black-tail deer.
Some of the trees have been here for 1000 years; all of them play a hugely important role in absorbing large amounts of carbon dioxide from the atmosphere — more than any other forest in America. It is also a brown bear-watching hot spot, although glossy black bear, wolf, otter, beaver and salmon swell the rivers and fiords, too. There are also mountain goats, flying squirrels, river otters, humpback whales, orcas and bald eagles. Small wonder it was one of the favourite places of renowned Scottish-American conservationist John Muir.

We’ve been dropped by seaplane into the thick of the action at a remote, permit-only beach on Admiralty Island in the Alexander Archipelago — with no dock, no services and no phone reception.

While the trip gives a unique insight into North America’s Amazon at its wildest, for guides such as Robertson it offers something else: salvation. "There’s nowhere else in the world like this," he says, inhaling the earthy morning air. “It’s so precious."

It’s also under threat, with the Trump Administration circling; last September saw congressional attempts to undercut a 20-year-old, Clinton-era policy by wiping out protection for one of the world’s last intact temperate rainforests. The sobering proposition is to open huge swathes of the woodland to potential logging, energy and mining projects. It has already been dubbed America’s rainforest tragedy.

A northern sea otter dines on fish.
Such a move favours the profits of logging companies over the fishing, recreation and tourism economy, despite there being well in excess of a million visitors each year, many of them from other parts of the United States, who come here to enjoy the wilderness and witness first hand why it is so crucial for the environment to preserve this area.

Several local guides have made off-the-beaten-track brown bear viewing their specialty — Robertson’s employer, Bear Creek Outfitters, among them. Juneau, where we are staying, is a reminder of an earlier era when Gold Rush saloons were all that stood between prospectors and the vast unknown of the Klondike. Those buildings host craft breweries, jewellery shops and crab shacks.

Many tourists arrive and leave on a cruise ship the same day but, staying overnight, the town empties out and we don’t see a single tour group for the remainder of our stay.

What we do see is real 9-5 Alaskans: charitable locals, seasonal workers and off-duty seaplane pilots. At the Hanger on the Wharf on the dock, I eat delicious steamed Bering Sea king crab legs, all crunchy exoskeleton and buttery flesh, washed down with a spruce beer from the neighbouring Alaskan Brewing Co.

The overriding impression is that both the sea and forest are of paramount importance: everyone wants them safeguarded. The lack of infrastructure beyond the town also encourages more grassroots and mindful travel — you have no choice but to embrace a "leave no trace" ethos.

Misty Fiords National Monument, near Ketchikan, southeast Alaska.
About 30km south of Juneau, the tarmac runs out and a fragmented map takes over. Beyond lies a forested landscape starved of company, abandoned by buildings and ringed by daunting mountains and heaving glaciers. Which is to say this sparsely populated, untrammelled habitat should be left to the bears.

Local transport is almost exclusively by ferry or seaplane and it’s the perfect way to witness the contrasts of such a dramatic landscape. On the way to Ketchikan, about 500km to the south, we can see below us vast swathes of rainforest and subarctic plateau. The trees shrink, the topsoil vanishes and a whole new world emerges. Silver threads of scarring ice have made a habitat along the mountain edges for goats and Dall sheep, while lakes and crevasses make way for glaciers where climbers and cavers chart paths into the unknown.

From Ketchikan, a 25-minute seaplane flight takes us out over Misty Fiords National Park, part of the Tongass wilderness and an expanse of extraordinary fiords 70million years in the making. Below, the back-country looks so inaccessible it feels newborn, and we land on the Neets Bay estuary, sending a rookery of sea lions crashing into the inlet, a mass of blubber and whiskers. At the height of summer, they entice orcas into the bay on hunting frenzies.

To truly bond with the Tongass, you need to get dirty and, only minutes later, we’re hiking along a muddy, mosquito-strewn path when our guide, Joshua Mendenhall, pauses and that something-is-watching-us feeling strikes again. Ahead, the wilderness has a last surprise for us. Sitting by the riverside, face on, is a hefty, black male bear gorging on a pink salmon that was only moments before swimming upstream. It’s so close that we can hear the rip of skin and crack of bones – sounds it would take a lifetime to get used to. "Why would we gamble any of this?" asks Mendenhall, simply.

Half an hour later, the bear disappears back into the undergrowth, full-bellied, and conversation inevitably turns to how much southeast Alaska is changing and what could happen next.

The future of the Tongass National Forest remains uncertain, but there’s a compelling argument that while people are the problem, sustainable tourism is the solution.

In this ancient fortress of the bear — so wild, so free and so exotic — the rewards have always been greater for those who leave only footprints behind.