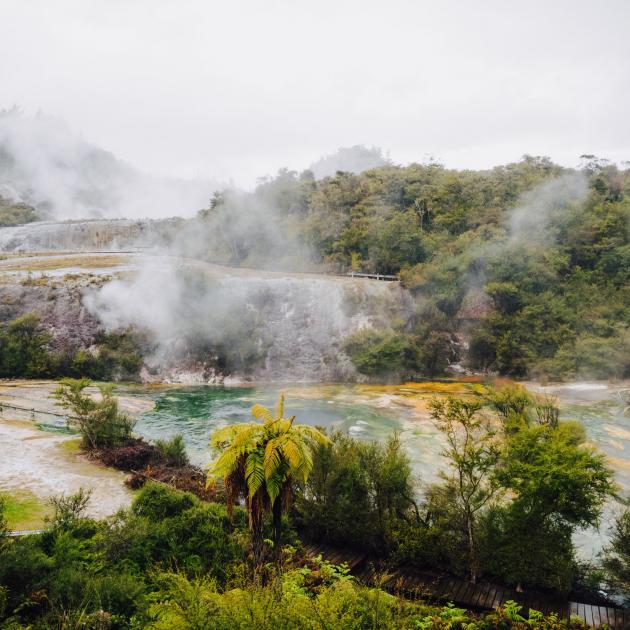 The Orakei Korako features geysers, hot springs and bubbling mud pools. PHOTOS: JARED DONKIN/LOUISE SCOTT/SUPPLIED
With borders closed to international visitors and Kiwis being encouraged to explore our own backyards, Louise Scott  looks at some North Island options for the ideal road trip - including fast cars, winding roads, spectacular views and what is claimed to be New Zealand’s most romantic bathroom.

It is quite the claim. "This is New Zealand’s most romantic bathroom."

Carel Sietses, the owner of Nightsky Cottage in Tongariro National Park, is adamant his double-bath, double-sink, twin bathroom is just that.

He has been pitching his high-end accommodation to mainly international clients since it opened.

Now, with borders closed — more Kiwis are coming through the door.

It is where I start my three-day road trip from Tongariro, joining the Thermal Explorer Highway and then taking a right to the Coromandel peninsula.

While we racked up a chunk of kilometres in a short space of time, there was beautiful scenery, albeit a bit blurred due to an horrendous rainstorm, and a few stops along the way where we could stretch our legs and take in the surrounds.

Our starting point, the Nightsky Cottage, part of Tongariro Suites, is a 10-minute drive from Ohakune and set in native bush.

Sadly, during our brief stay we did not get to see views of Mt Ruapehu promised in the brochure, due to a late-evening arrival and low cloud the next morning.

The cottage was quite flash.

Sustainability was key when building the about 90sq m two-bedroom property and Sietses talks passionately about its construction. 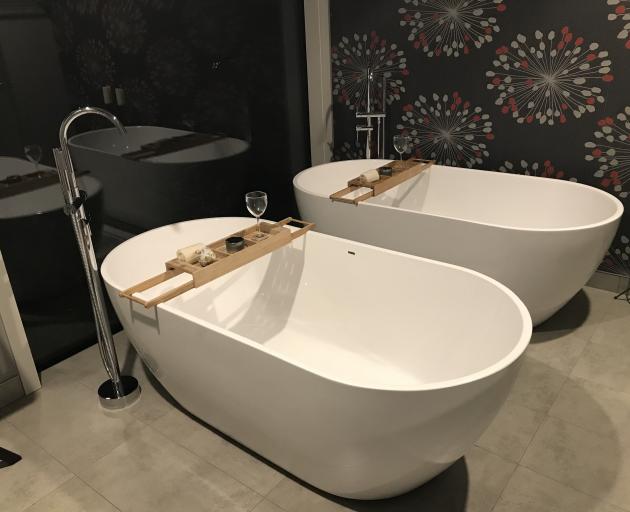 Nightsky Cottage owners say this bathroom is the most romantic in New Zealand.

It boasts an environmentally friendly waste system with the grey water, after treatment, being discharged into the forest floor in protected regenerating manuka bush.

To achieve this, he had to dig the 220m of trenches by hand in order not to damage any trees or roots.

"This was a massive, fiddly, physical and very time-consuming job, which took me nearly three months."

All timber and building materials were delivered to the car park and carried down the 50m boardwalk to the building platform where builders constructed everything from scratch.

The cottage is stunning and the owners thought of the smaller details for guests.

A cosy woodburner in the living room can be run with firewood and sustainable fire lighters and matches, fully stocked for each stay. These can also be used to light the many candles around the property.

The living room opens on to a wooden deck where, weather permitting, you can sit with a cuppa or a glass of wine.

You can definitely tell why the owners, Sietses and his wife Elsbeth, chose the name - Nightsky Cottage.

There is a skylight so stargazers can look out and view the twinkling lights above. 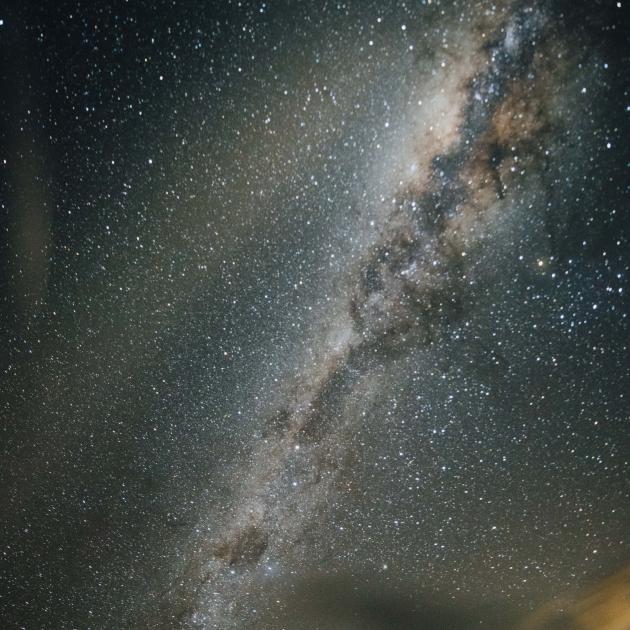 Not only does the accommodation at the Tongariro Suites offer views of Mt Ruapehu — star-gazing conditions are great.
That said, those of us who live in the South Island are spoiled for choice when it comes to stargazing.

For those sitting on the deck with a cuppa there is home-made organic tea to choose from. To accompany it, chocolate made in Dunedin by the Otago Chocolate Company. There are also smaller touches that add to the experience: a mini torch on the night stand so you do not trip on the way to the loo in the middle of the night; slippers and really fluffy his-and-her robes.

The bathroom is fully equipped with goodies, including home-made bath salts and bath bombs and assorted essential oils.

For breakfast there’s a range of organic produce to cook before heading to the next destination.

The next port of call was the Coromandel Peninsula, via Taupo and the Desert Rd.

The road, on a good day, shows off impressive landscapes, including volcanoes - Mt Tongariro, Ngauruhoe and Ruapehu and to the west the Kaimanawa Range - but the day we chose to travel you could almost see the car in front, due to a horrendous downpour.

Luckily I have completed the route before and can tell you it is quite the drive.

Long stretches of open road, flat terrain with a mountainous backdrop — with winding corridors in between to ensure you are not getting too comfy in the driving seat.

Then heading towards Taupo you get incredible views of the lake — New Zealand’s largest. 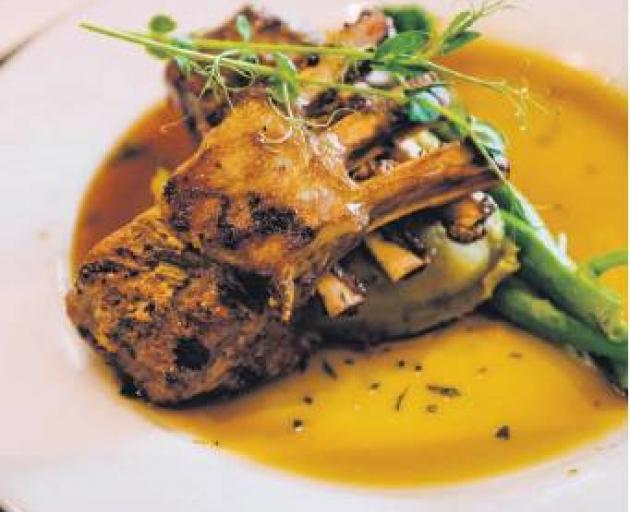 Vine Eatery and Bar, Taupo, offered delicious food after a long drive from the Tongariro National Park.
One bonus of travelling throughout New Zealand when no other tourists are around: quieter roads.

I have previously queued to get into Taupo township. But on this occasion we drove straight in and did not have too much trouble finding a parking space to stop for a bite of lunch.

The bustling lakeside resort has loads to chose from when it comes to food.

The streets are lined with boutique cafes and restaurants in addition to the regular names you would expect to find in any large town.

We stopped off at Vine Eatery and Bar, which has both New Zealand and Mediterranean-influenced menus.

And to go with it an impressive supply and wine — or whisky. It also had a chandelier fashioned out of wine glasses as a feature near the front of the restaurant that really caught the eye.

One distinct difference to what we have in the South Island is all the geothermal activity in the central North Island.

And a great example is the Orakei Korako Geothermal Park and Cave.

I have never been anywhere quite like this, either in New Zealand or abroad.

It feels like you are stepping back in time to a world of volcanic gushing geysers, hot springs, bubbling mud pools and some of the largest silica terraces on the planet.

We started the trip by hopping on a ferry to cross a gloomy-looking lake.

It was pretty cold but our skipper assured us we would warm up as soon as we reached the other side.

The park is nestled in the Taupo volcanic zone between Taupo and Rotorua - a 25-minute drive from Taupo and 45 minutes from Rotorua. 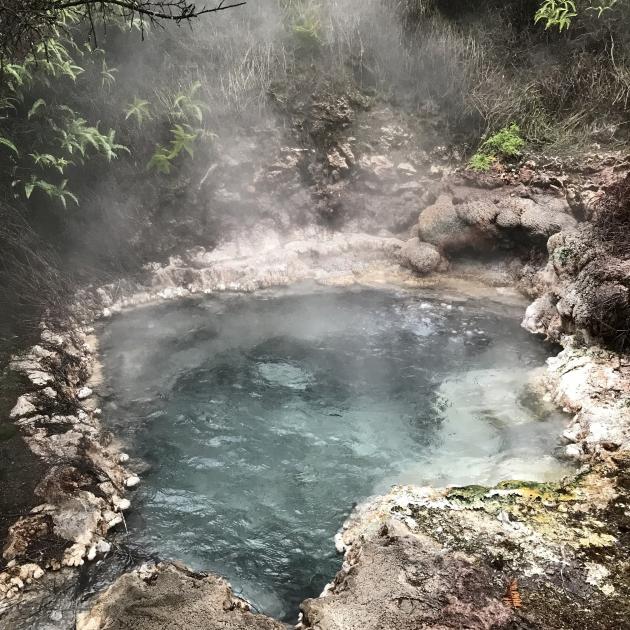 A bubbling mud pool and hot pool at the Orakei Korako geothermal Park.
There are up to 23 active natural geysers but the number constantly changes.

Once you get off the ferry, a walkway guides you through the park, which includes a native bushwalk in addition to its geothermal bits and pieces.

As you walk along you can hear the "pop, crack, bubble and splash" of the pools and geysers around you.

One of our group ventured to put his hand into one of the streams running down the jade green "Emerald Terrace". I, however, was not that brave ... or that stupid.

As the walkway weaves around it takes you to Ruatapu Cave. It extends more than 35m down to a hot pool at the bottom named "Waiwhakaata" (Pool of Mirrors) and a sign tells you it is one of only two known caves in the world located in a geothermal field.

You are not allowed to enter the pool, but you can view it from a platform above.

From steam to sea

The last port of call on our whistle-stop tour was the Coromandel Peninsula, and the views did not disappoint.

We stayed in a posh airbnb in Wynua Bay, which is 5km west of Coromandel town.

The property definitely had the "wow" factor and was designed by Queenstown architects Kerr & Ritchie.

I have rarely stayed in such an opulent home: the master bedroom had a large bathroom, including large tub, a living area including a sofa and TV, and the length-of-the-room glass doors opened on to a large deck with views of the bay below.

There was artwork from local creative types and each room had an individual style and design.

There was a fully stocked bar, a piano, library and three balcony options.

But aside from all the luxury — nothing could match the views. The house was perched on the top of a hill so no matter which way you looked you had a view of the ocean.

My only regret is that we were not able to stay longer and explore every nook and cranny the peninsula had to offer in addition to the well-known hot spots such as Hotwater Beach and Cathedral Cove.

But before heading back to the hustle and bustle of Auckland, we had one more treat to enjoy: The Lost Spring, a geothermal hot pool and day spa near Whitianga on the peninsula.

There are three pools to chose from that range in temperature and size. And for those a bit thirsty, there’s a bar where guests can order their cocktail while relaxing in the warm water.

The only downside ... if you step out of the pool you had better be prepared for the droves of mosquitoes.

It was a tough decision whether to stay out of the water and enjoy a platter-style lunch, or become lunch for the bugs which were clearly hungry.

The trip was hosted and paid for by BMW New Zealand.