Surf's up and life's a beach 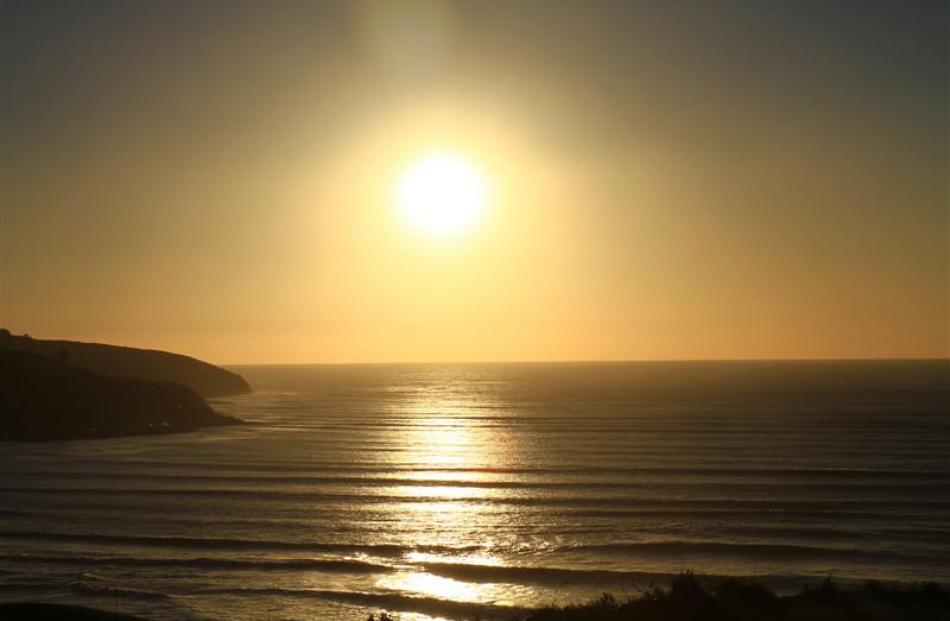 The sun sets over Ngarunui Beach. Photos by Jeff Kavanagh. 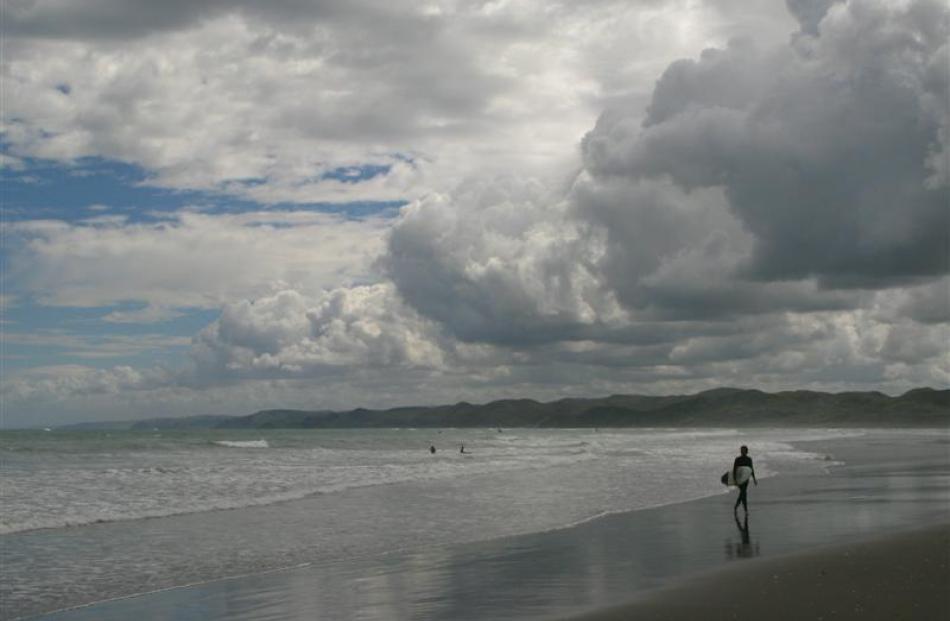 A surfer emerges from the sea at Ngarunui Beach. 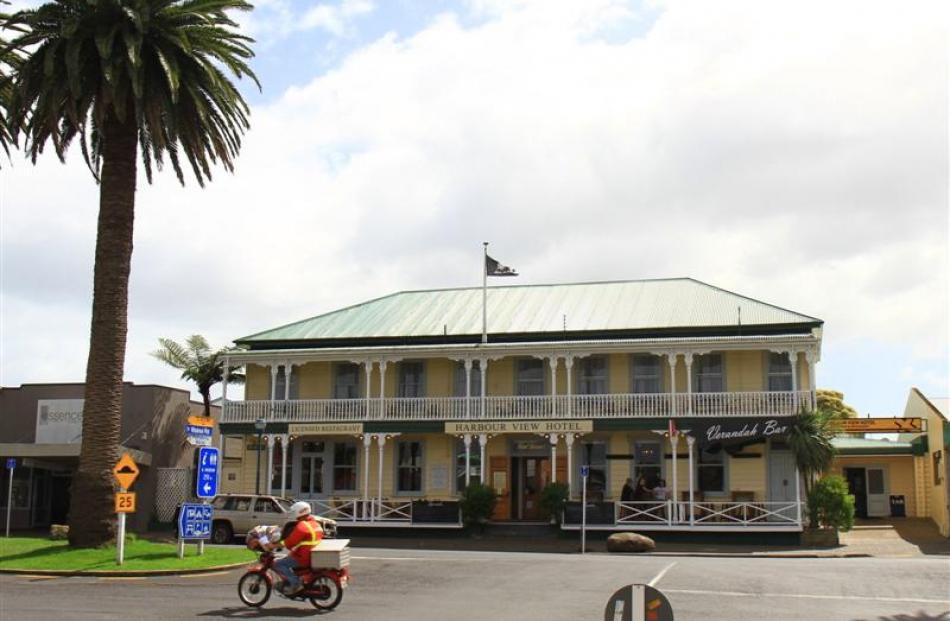 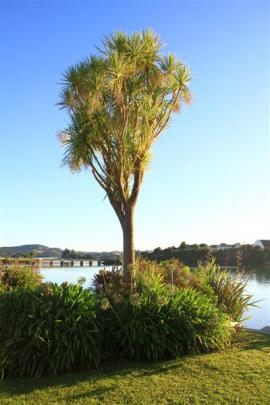 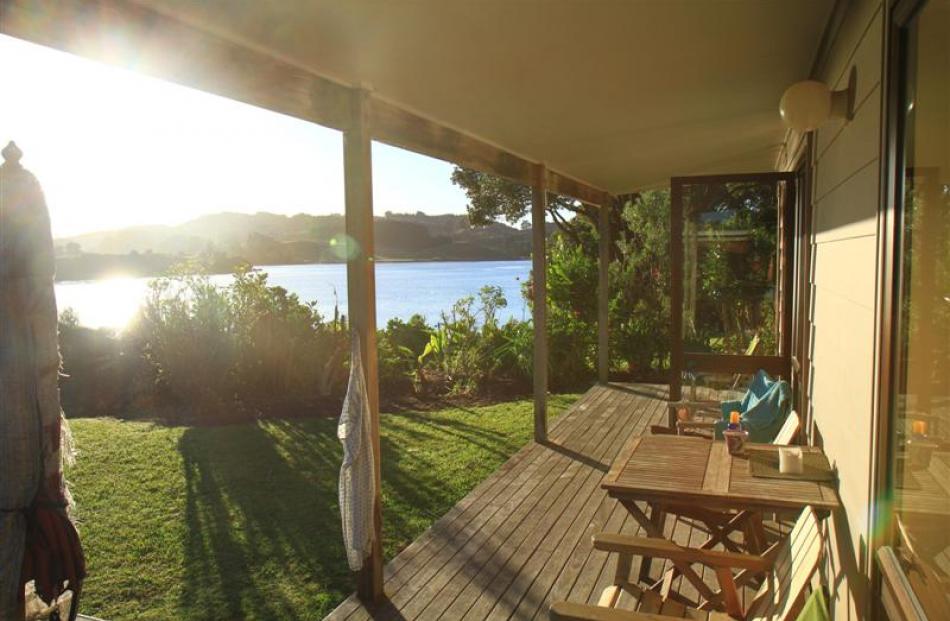 Morning sun streams on to the deck of our rented accommodation.

Good food, great surf and glorious sunsets. Jeff Kavanagh gets a taste of life in Raglan.

Sadly, we never get the chance to test the claims that the fish and chips from the Te Kopua camp store in Raglan are as good as those from the dairy around the corner from where we're staying.

We'd heard from Judy, the owner of our holiday house, that there's debate between locals about the merits of the two and we arrive at the store just after seven to find a small crowd of people patiently waiting in the golden evening light for their orders. Our plan is to grab some greasies and drive to the beach, a couple of minutes over the hill, to watch the sunset. As we approach the store's hole-in-the-wall counter, a kid of about 11 moves away, bundles wrapped in newspaper stacked up to his chin, revealing a "Sorry, kitchen closed" sign, and it's hard not to wonder if he's just cleaned them out.

The kitchen, we learn, closes at seven, so we leave with a dried-out steak and cheese pie and a couple of cold drinks. Any disappointment we feel doesn't last long, as my girlfriend and I are soon sitting at a picnic table high above the long, majestic sweep of Ngarunui Beach, watching perfectly spaced sets of waves crash on to the black sand as the sun falls towards the ocean.

Earlier in the day we were among the waves ourselves, trying out our newly acquired surfing skills. Half-an-hour west of Hamilton, and endowed with a stunning, unspoilt coastline and some of the best point breaks in the country, Raglan has long been popular with surfers, both local and from overseas, and throughout the summer months its car parks are full of camper vans and old station wagons laden with surfboards and mattresses stuffed in the back.

Keen to give it a whirl, but reluctant to shell out $90 each for a lesson, I was eventually convinced by my girlfriend that getting some proper instruction would be money well spent, and it was. After an hour's basic tuition in the art of getting up and staying on the board in Raglan Surfing School's corrugated-iron training hall, hidden away in native bush above Whale Bay about 15 minutes out of the town, we were ready to hit Ngarunui Beach to try out the real thing.

The brochure promised that 90% of learners would be able to stand up by the end of the three-hour-long lesson, and among our group of French, German, Swiss, Icelandic and Kiwi novices there wasn't anyone who didn't.

We may not have got much beyond wobbling along in the white wash on our eight and nine-foot-long boards, but the experience was enough to have my girlfriend and I back renting boards and wetsuits a couple of days later.

Removed from the closest surf beach by a short drive, Raglan lies near the mouth of the Raglan harbour, its township an easy, laid-back place with magnificent phoenix palms lining the main street and the 107-year-old Harbour View Hotel sitting grandly in the middle. As you'd expect in a town synonymous with the sport, there are plenty of surf shops with staff padding around in jandals, but also little clothes boutiques and kiwiana stores catering to weekend visitors from Hamilton and Auckland, as well as a few more-than-decent cafes serving up fare as tasty and varied as you'd find in the bigger cities.

The best of these we discover is The Shack, tucked beneath a broad, shady veranda across the road from the pub. The week we're in Raglan coincides with one of the worst summers the North Island has experienced in a decade, and at least a couple of days at the beach are interrupted by cloudbursts and trips there for coffees and blueberry and chocolate muffins. Besides the usual cafe staples, The Shack's menu boasts salad nicoise, grilled calamari, and a massive roti wrap named The Hungry Surfer, stuffed with chicken, bacon, potato and cheese, on which we gorge ourselves.

Breakfasts and dinners we tend to prepare back at the two-bedroom bach, which is modern and comfortable and, like most places in Raglan, is no more than a 15-minute walk from the town centre and a well-stocked Four Square supermarket.

On the nights that we're too lazy to cook, the Raglan West store and some superb gurnard and chips, lies within a happy stroll down the street.

Despite the occasional deluge, the early March weather is generally warm and pleasant, and time spent in cafes or lazing on the bach's own generous veranda is interspersed with swimming and surfing and drying ourselves out on the beach afterwards. Judy's place is equipped with kayaks and a paddle board, and the arm of the harbour that stretches beneath the town's single-lane bridge and past the house is narrow and calm, sheltered by rolling hills and dormant volcano Mt Karioi, the craggy jaws of which yawn open towards the sky.

Having had a go on the stand-up paddle board in the harbour, which is both less challenging and exciting than riding in the surf, we take the two-seater kayak late one day as the tide is on its way in and the sun is setting. There's a light breeze in our faces, but with two paddling it's easy work to glide out under the bridge and around towards the bar at the harbour mouth. As we do, we see two or three little pleasure craft bobbing on the water, fishing lines taut off the sides of the boats, angling for that evening's dinner or the next day's lunch.

It reminds us that we're hungry ourselves, so we turn the kayak towards the bach. On the way back, past the camping ground, we spy people again gathered in the late sun outside the store, waiting for their fish and chips. We're tempted to stop, but we're damp from the splash of the paddles and on the verge of getting cold, so continue onwards to the bach for a shower, something to drink, and, if the mood takes us, a trip to the dairy down the road.