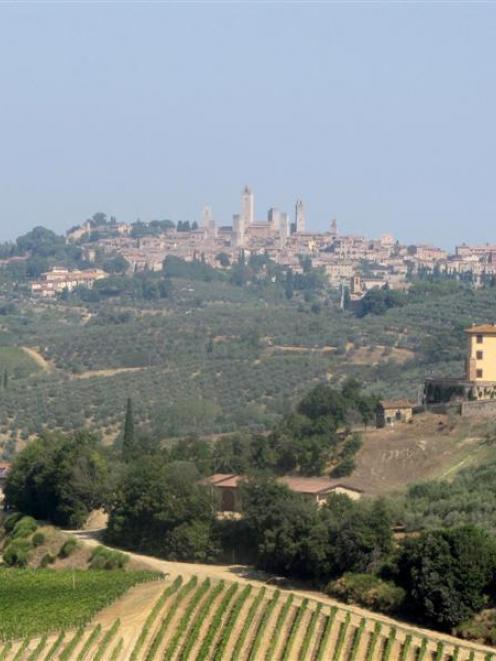 On the way to San Gimignano. Photos by Simon Cunliffe.
Like many a pilgrim before him Simon Cunliffe finds that travelling by foot can be good for the soul.

James Bond made it look easy. There he is at the outset of Quantum of Solace jumping into his Aston Martin in an unnamed exotic location and moments later stepping out in the Piazza del Campo in Siena.

True to form, he times his entrance to maximise the confusion and the visual impact in the middle of one of the most dramatic, but short-lived spectacles in the Italian cultural calendar.

The celebrated Palio - a thrilling, feverishly partisan horse race around the cobbles of the angled and tight-cornered Il Campo square - has featured in Siena since the Middle Ages, many centuries before 007's modern producers, in search of ever more exotic locations, contrived to place the spy in the midst of the twice-yearly, 1min 40sec event.

In mediaeval times, you arrived at Siena at a more leisurely pace and made your entrances a little less arresting.

This fascinating Gothic city stood on the pilgrimage route between northern Italy and Rome.

Mainly you travelled by foot, or horseback, along the trail, sections of which still exist.

Intermittently during our six-day stroll through the Tuscan countryside, we join the Via Francigena, today a network of dusty tracks hosting those who prefer to get a little closer to the land - replete as it is with culture and history - than is possible from car or bus.

In the embrace of a late-summer heatwave that has gripped Italy with the clammy intensity of a Berlusconi sex scandal, you tend to work up a little more of a sweat than the ever-cool Daniel Craig. 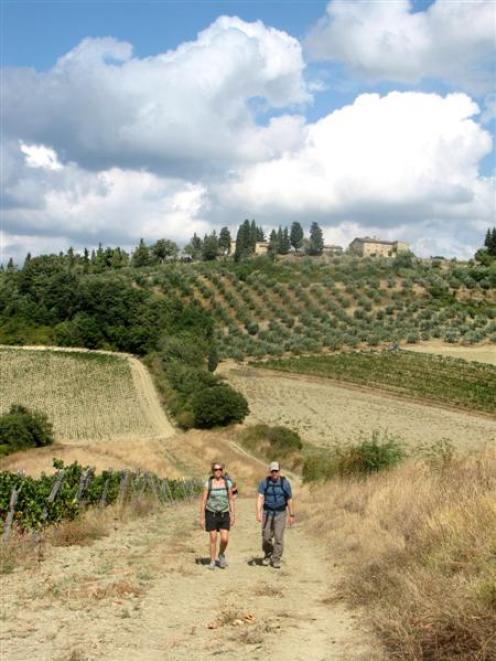 Vineyards and olive groves criss-cross the Tuscan countryside.
But for those who have come as well to sample the irresistible delights of Tuscan cuisine, and the local wines, the exercise is an excellent counterbalance to the inevitable ballast taken on board with a procession of meals, each seemingly more delicious than the last.

Knowing where to join the trails; which of the profusion of trattorias, ristorantes and pizzerias in the enticing Tuscan towns offer genuine value-for-money culinary treats; how to take in the culture without overdosing; what grapes and which wine labels to enjoy; and learning the history of the region and the countryside but without feeling as if you've joined either a school field trip or a queue of tourists all clutching the same well-worn guide book requires a degree of local knowledge.

As our guide, Brett Naisby, puts it with his trademark wit, the trial-and-error acquisition of that knowledge means "you end up kissing a lot of frogs".

Naisby, a Canadian, is married to New Zealander Eve Hope, a ceramics designer based in Tuscany, and together they spend four or five months a year based in Christchurch planning their next season's itineraries.

He can claim at least honorary Kiwi status.

It is partly this connection and partly felicitous word-of-mouth recommendations that have seen us break the habit of a lifetime - a diehard preference for DIY travel - and sign up for one of their Customwalks tours.

Having hiked for a few hours on each of the four preceding days, we have earned an entire day off for shopping and sightseeing, and Naisby has conjured up a local expert to show us the ropes.

"They even wanted to put James Bond in the race itself," explains Rita, with a degree of disdain as if such a feat were impossible even for the celebrated secret agent, "but we refused".

She shrugs with pride, which is evident again as she takes us into the contrada, or quarter, of the town whose horse won the last Palio.

The symbol of the owl adorns the red and black flags that drape throughout the quarter, demanding renewed respect from the rest of the Sienese, and months of bragging rights.

Rita explains that the Sienese are baptised twice: once into the Church and the other into the contrada.

The Palio is more than just a simple horse race.

But let's retrace our steps.

The tour - a group of 11 including ourselves - assembles in Florence at the attractive l'Hotel Orto de' Medici, after a free day and night acclimatising.

In our case, we have extended the trip to include a two-day prelude in this treasure trove city of art and architecture.

Largely rebuilt during the Renaissance under the patronage of the wealthy and influential Medici regime, it yields sights and wonders that would take a week to begin to do justice to and, solo on this leg, we restrict our sightseeing to highlights.

In places like this, with the heat, the busloads of tourists and the potential for masterpiece overload, the dreaded "been-there-done-that" syndrome lurks impatiently in the wings.

But by the time we meet our travelling companions we have seen Michelangelo's David in the Accademia, works by Botticelli and the young Leonardo da Vinci in the Uffizi Gallery, Giambologna's The Rape of the Sabine Women in the Piazza della Signoria, and climbed to the top of Brunelleschi's magnificent dome atop Santa Maria di Fiore, otherwise known as the Duomo.

The trip proper begins on a Sunday with a bus transfer from Orto de' Medici to the vicinity of the old Etruscan town of Volterra.

Fortifying ourselves with a light lunch at a small rural cafe, including the disarmingly simple yet mouthwateringly tasty bruschetta mista - often some combination of tomatoes or porcini mushrooms on toasted rustic bread - we set off on our first stroll.

It's just an hour or two up to the town with its remnant Etruscan walls, uncovered Roman ruins and a museum that provides clues to the origins and culture of the Etruscan people - which long pre-dated that of the Romans.

And, as in the days that follow, our walk takes us across a terrain replete with rolling hills, vineyards and ancient trails past ruins, relics and reminders of centuries-old civilisations.

Here and there we stop to pluck wild ripe figs or blackberries, or to catch our collective breath in a patch of shade for a short tutorial on, for example, the long history of rivalry between the Florentines and the Sienese, or the legend behind the black rooster on the label of Chianti Classico wines.

Laurenzo, a charming young guide from a local Etruscan village, fills us in on the latter as we visit the picture-perfect hilltop fortress of Monteriggioni, once a bulwark for the Sienese against the marauding Florentines.

The surrounding land now comprising the Chianti Classico area was once fiercely contested by the two city-states.

In the 13th century, legend has it, city leaders decided to settle the boundary dispute by a competition in which, Laurenzo explains, a champion horseman from each would set off towards the other at the crowing of a rooster.

Where they met would be the new border.

The Sienese chose a plump and pampered white rooster, the Florentines a starving, raggedy black cock, the latter waking to crow well before dawn, the former exercising its noisy prerogative only at sunrise.

The substantial advantage saw the Florentines get as far as about 20km north of Siena, with the result that today much of the Chianti Classico land falls under Florence's jurisdiction.

Believe it or not, it is just one further encouragement to sample Tuscany's splendid wines during our evening dinners at the many exotic eateries tucked away in the towns in which we stay: the lesser-known but beautiful Volterra, the fascinating old crystal centre of Colle di Val d'Elsa and, for our last couple of nights, at the historic and imposing family-run Villa Lecchi - following a late-afternoon splash in the establishment's welcoming pool.

In these towns, too, as well as the works of Renaissance masters to behold, heart-stopping architecture, and the maze-like profusion of intriguing alleyways, there is shopping and of course a replenishing of the energy stocks: following in the footsteps of medieval pilgrims can be hungry work and Naisby makes sure we are sufficiently fortified.

It is an unexpected bonus - the icing on the cake of this cultural excursion - that we have lucked into such a charming and amiable group of Americans with whom to enjoy our travels.

And that we have such a skilled guide.

He brings his evident love and knowledge of the country and culture to bear, an entertainer's bag of stories and jokes, along with the skills that led him into a promising career in the Canadian diplomatic service, which he eventually tossed in to follow his footloose dreams.

"I try to find special moments, and experiences and to build tours around those," he says.

"You look for a balance between the need to visit well-known sites and to experience the authentic people and places of the region."

You know he's succeeded when, by the end of a week in his company - numerous site visits, several hotels, untold bus transfers and many, many hours spent talking, learning, laughing, eating, drinking in the beautiful vistas and bathing in history - we have not kissed a single frog.

Simon Cunliffe travelled independently to Italy; he toured in Tuscany with assistance from Customwalks.

If you go
Cost of tour: $US2799 per person ($NZ3857) based on double occupancy. Customwalks (www.customwalks.com) specialises in walking, cycling and scooter tours in Italy and France with occasional (sailing) forays to Turkey, and desert-walking in Algeria.

Name the four lead actors in the production. Answers to playtime@odt.co.nz, with "Fortune" in the subject line. Include a postal address and daytime telephone number. The tickets are for Wednesday, December 9 at 7.30pm.