Tourism up in the air 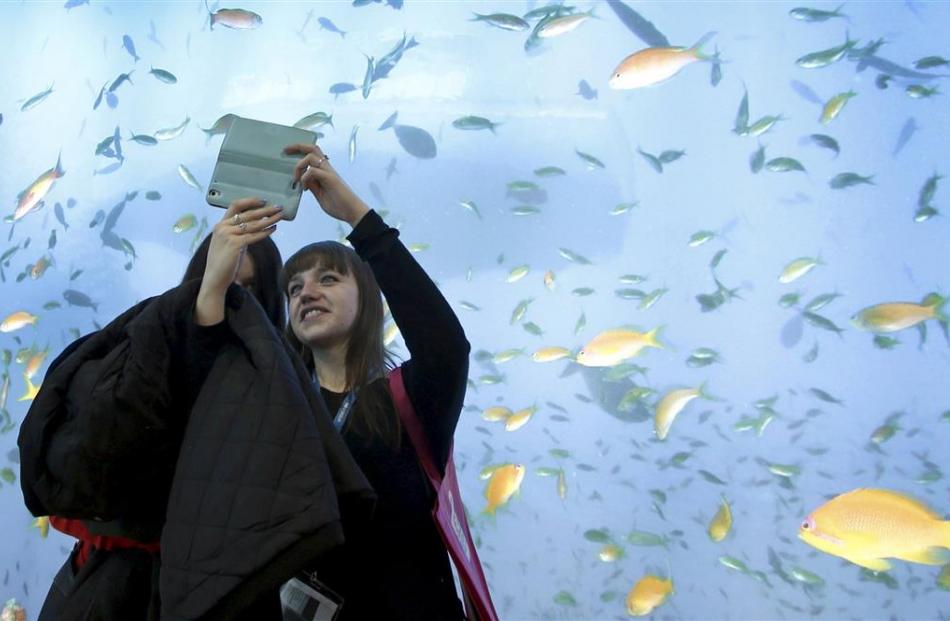 Visitors take a selfie at the exhibition stand of the Maldives at the International Tourism Trade Fair (ITB) in Berlin, Germany. Photo from Reuters

‘‘The Maldives is one of the countries that will be severely affected by climate change, but the tourism system of the Maldives ... is also a major contributor to climate change; how should we look at that paradox?''

Despite German sustainable tourism researcher Prof Stefan Gossling's hardball question, Maldives Tourism Minister Moosa Zameer was in no doubt about how to respond: ‘‘I think whether tourists arrive or not, the Maldives will be impacted by climate change. We are already impacted by climate change ... Now we as a people have to survive, we have to do what we have to do, so we are inviting people,'' said Mr Zameer.

The Maldives could try to ensure its tourism products were ‘‘sustainable'', but for the moment, the country didn't have a choice but to be involved in the industry, he said.

Concerns in the Maldives are understandable. Under some climate change scenarios, the low-lying island state could be completely submerged by sea-level rise.

The Maldives wants to be part of the growth, but as a model of sustainable, carbon-neutral tourism. In this part of the world, New Zealand has also set its tourism growth targets high; aspiring to hike annual tourism revenue from $NZ31 billion, up to $NZ41 billion by 2025.

Fiji has singled out the recovery and strengthening of its tourism industry as essential to rebuilding in the wake of Cyclone Winston.

But Prof Gossling says the global travel industry may have cause to pause.

‘‘There's a marked increase in meteorological events; in particular storms, floods, extreme temperatures, droughts and wildfires; which have increased massively over the last three years. Obviously, there is a cost connected to this, and obviously there are repercussions for the tourism system ... Our question is not whether we would want to stabilise the climate system: it's a question of how to.''

Here lies the problem. Tourism accounts for about 5% of global CO2 emissions, air travel accounting for 40% of that. To play its part in trying to keep global warming below the 2degC limit agreed on at the COP21 climate conference in Paris, Prof Gossling warns that the tourism industry must cut emissions.

But by his calculations, the biggest contributor - tourism aviation - will dramatically grow its share, thwarting mitigation efforts.

Tourism has a decarbonisation dilemma, he says. Global CO2 emissions need to decline by 40% to 70% by 2050, yet emissions from tourism are expected to grow by 170% in that time.

If that feedback loop of tourism growth, increased emissions, accelerated climate change, and meteorological threats to tourism comes to pass, where would it leave New Zealand?

‘‘Longer, hotter and drier summers, while problematic for farmers, would actually benefit the tourism sector,'' he said.

‘‘But rising sea levels, more frequent and severe storms, and melting glaciers are all threats to New Zealand's tourism offering.''

Prof James Higham, a researcher and lecturer specialising in tourism and environmental change at the University of Otago, agrees that New Zealand tourism does have its own specific vulnerabilities.

‘‘While New Zealand does not face the same immediate threats as low-lying island states such as the Maldives, we do have tourism resources that are very dependent on stable climate. The ski industry is the most blindingly obvious example.''

While he says North Island skiing and lower elevation ski areas are vulnerable to climate change, the New Zealand ski industry could benefit from increased Australian tourism, since Australian snow cover is more at risk.

However, he notes there is potential for ‘‘maladaptation'' to such circumstances; for example, more Australians flying to New Zealand would mean higher aviation emissions, further accelerating the processes which are putting snow cover at risk.

A similar loop is evident for West Coast glaciers, visitors facing longer walks to reach retreating ice: ‘‘Some businesses now are offering heli tours; you helicopter up to the glaciers, which is contributing to climate change and accelerating the retreat of those glaciers.''

Prof Higham thinks the New Zealand tourism industry also has to be concerned about the growing awareness of climate issues among international travellers.

‘‘If people in our European tourist markets start changing the way they think in relation to climate, they won't stop travelling necessarily, but they may choose to go and experience beautiful fiords and glaciers in Norway, because it's much closer and they can get there by transport means that avoid or greatly reduce the need to fly.''

Mr Roberts says the industry is on the case, airlines, for example, working to minimise environmental impacts by using biofuel and more fuel-efficient aircraft.

While such advances are welcome progress, Prof Higham says the idea that we can rely on technical quick fixes to reduce aviation emissions is a ‘‘technology myth''.

Aviation is already very efficient, so there are few opportunities for further gains, he says.

‘‘The problem with aviation is that it has doubled every 20 years for quite a number of decades, so any efficiency gains are insignificant in relation to the amazing growth in demand for travel.''

Governments are loath to tackle aviation, he says, and only recently has talk turned to market-based measures, such as emissions trading and taxes.

‘‘A government response is required and it's going to have to be realistic and meaningful, but it's also going to have to accommodate the fact we're a very far-flung, isolated, oceanic country.''

In New Zealand, Prof Higham says we need to integrate tourists into efficient, cost-effective and sustainable local transport systems. With non-aviation transport making up 35% of tourism emissions, he says a shift to more regionally focused tourism - more common among local and Australian visitors - is important.

He singles out the Otago Central Rail Trail as a glimpse towards the future of regional tourism, a shift away from the rapid movement through the country's widely strewn attractions.

‘‘People using their own physical energy to cycle through wonderful little communities in Central Otago, and getting a feel for their heritage, this is an example of low-carbon transition.''

All of this begs the question: in a post-Paris global economy, after Fiji has experienced the strongest tropical cyclone on record in the southern hemisphere, how justified is air travel?

With international air travel limited to a privileged few - an estimated 3% of the world's population - Prof Higham sees a fundamental problem of inequity, given that island nations like Fiji contribute ‘‘virtually nothing to anthropogenic climate change, but are at the absolute cutting edge of the consequences''.

‘‘I think that further emphasises the question, because you find that people living in Fiji don't fly very much at all, so when they need to, there's probably good justification for it,'' he says.

‘‘Whereas in many societies, people are travelling more and more for reasons that may become harder and harder to justify.''