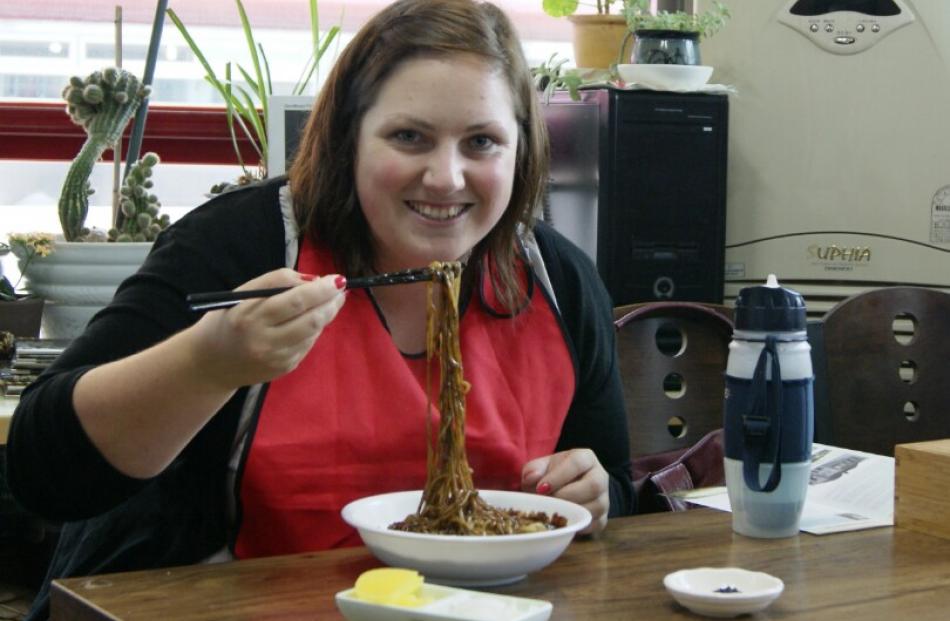 Me eating the famous dish Jjajangmyeon. 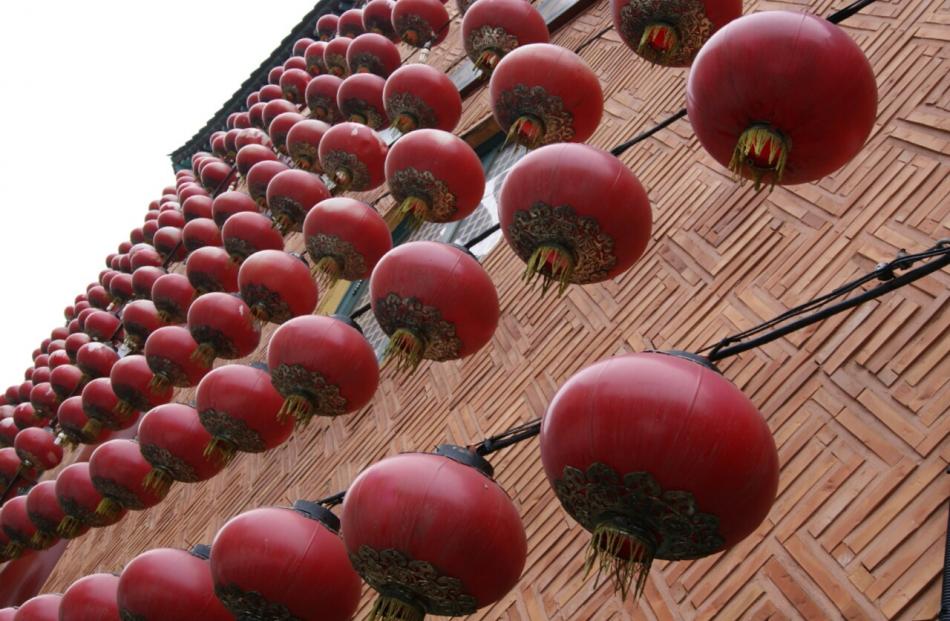 Bright red lanterns cover a side of a building in Chinatown. 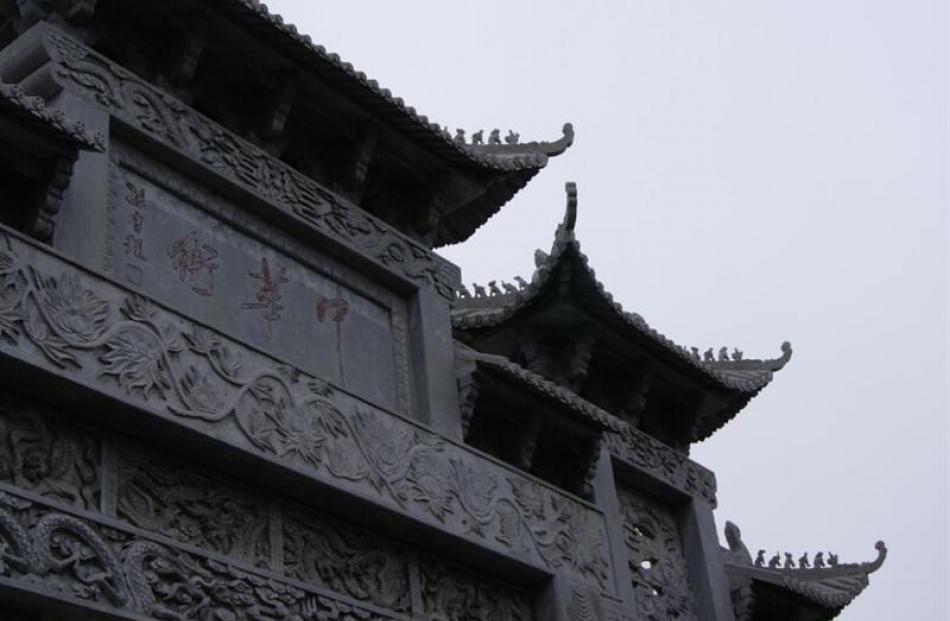 First Paeru, one of the entrances to Chinatown. 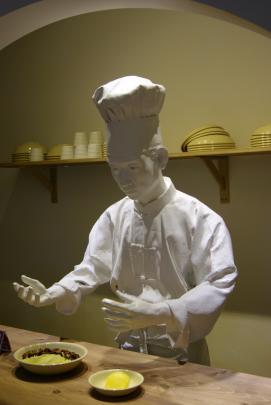 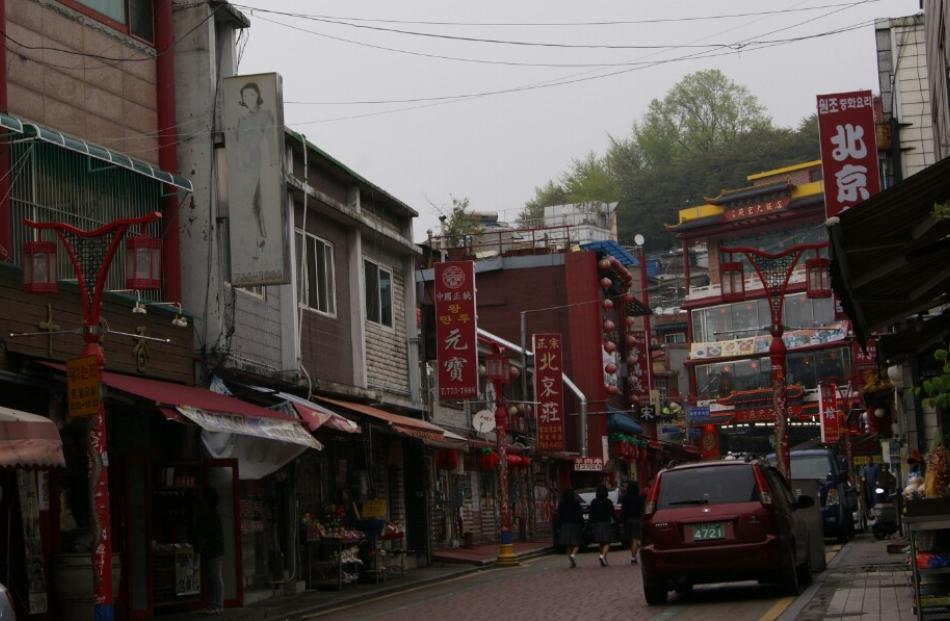 ODT reporter Sarah Marquet blogs about life in Seoul, Korea. With funding from the Asia New Zealand foundation, she will be working in the newsrooms of one of South Korea's largest papers, the Joong Ang Daily, for the next six weeks.

I had left my parents' home in Christchurch shortly before 3.30am. I had only finished packing about four hours earlier and I was miserable - it was cold, I was tired and I knew I had a long day ahead of me.

Three planes and 19 hours later my feet were finally on Korean ground. With my bags on a trolley I went off to look for a pay phone or help desk to call the shuttle which was to take me to my hotel. A friendly looking older man approached and told me he was a taxi driver. He asked where I was going.

"Hotel Sky Incheon" I told him, adding that I was to take a shuttle.

He was fairly insistent that I should take his taxi, to the point of taking my elbow and trying to steer me towards the door - he just wasn't taking no for an answer.

He left through a one way door, expecting me to follow.

Thinking about it now, I feel a little bad for him - there must be a lot of competition for passengers but the hotel I was staying at offered a free shuttle service.

Kyla, my travel consultant had suggested the idea of staying at a hotel at least for the first night so I wouldn't need to find my way to my homestay, about an hour away from the airport, in the dark.

I am very glad I listened to her, despite the cost. I even opted to stay a second night as check out was relatively early.

On that first day in Korea, I decided to check out Chinatown.

Strange I know, that my first full day in Korea should be Chinatown but, according to my guidebook, it was one of the top things to see and do in the Incheon area, 36km west of Seoul.

First though, I had to find my way there.

Unseo Station was the closest to my hotel, about a five minute walk. Thankfully all the street signs were in Korean and English, as were all the instructions on the ticket machines at the station.

I had to transfer to other trains at two different stations. There were hundreds, maybe thousands of people rushing on and off trains, up and down stairs and pushing past the shoe, clothes, or knick knack salespeople set up at almost every corner in the stations.

Except, I stuck out like a sore thumb, worse maybe. A sore thumb can be hidden in a pocket, there was no hiding a large white woman with a camera in one hand and a map in the other.

On the trains, those that weren't busy on their smart phones, which was actually pretty much everybody, would stare at me when they thought I wasn't looking.

One of the entrances to Chinatown was right opposite my final stop, Incheon Station.

Known as the First Paeru, it is a huge ornate gate carved with images of plants, animals and people.

Beyond was a red, gold and green shopfronts lined the street. Some were Chinese restaurants, some were gift or souvenir shops, others were like mini supermarkets selling Chinese ingredients, as I was told by one shop assistant.

Bright red lanterns hung from some buildings and streamers from others.

After maybe half an hour of wandering I heard "hello".

I turned to see a middle-aged man picking coriander. He asked where I was from and when I said New Zealand, he replied: "Ah, New Zealand, U.S.A". He laughed as I looked at him blankly for a moment. "Oooooh, New Jurando," he said, still laughing.

I asked what his name was, Mr Jong he replied but said he wanted to be called John, like an Englishman.

In broken English he went on to tell me about the "most famous" Chinese noodle dish, invented in Chinatown, Incheon.

As he pointed me towards a restaurant, visions of the pushy taxi driver came flooding back.

I was hungry though and had no where else to be so followed his directions.

Inside the tiny restaurant an old lady sat peeling a huge wicker basket of garlic, a small black dog licked its foot and a younger lady sipped tea while the tv blared some kind of Korean drama.

John presented me with a menu, there were only four choices - vegetarian Jjajangmyeon, the famous dish, pork Jjajangmyeon and two kinds of spicy seafood soup. I opted for the vegetarian dish.

John told me it was noodles with every kind of vegetable he could name.

A pile of noodles was topped with the most amazing sauce, like nothing I have ever tasted. On the side were raw pieces of onion and slices of a pickled radish-type vegetable.

They made me wear an apron but I still walked out of there with sauce on my dress, and my face which I didn't find until the Jjajangmyeon museum.

I guess the dish really must be famous if it has its own museum.

John had guided me to the museum after lunch, he said it was a must-see.

I'm sure it was but everything was in Korean and frankly, the mannequins depicting the dish's history were just plain freaky - incredibly detailed but mostly painted a plain white.

John produced a brochure which told me that the Jemulpo settlement, as the area was once called, was established in 1883 when Korean diplomat Kim Hong Jib and various foreign diplomats signed the General Foreign Settlement at Jempulo Agreement.

It was here that foreign cultures first touched the then hermit kingdom of Korea, including Japanese, English and American. A Russian designed many of the buildings and a German was the area's first doctor.

In all it was a great first day but it made me a little sad - sad that I had no one to share the experience with, I couldn't turn to a friend and point out something interesting or laugh about getting slightly lost.

Maybe that was just the tiredness talking, or maybe culture shock.