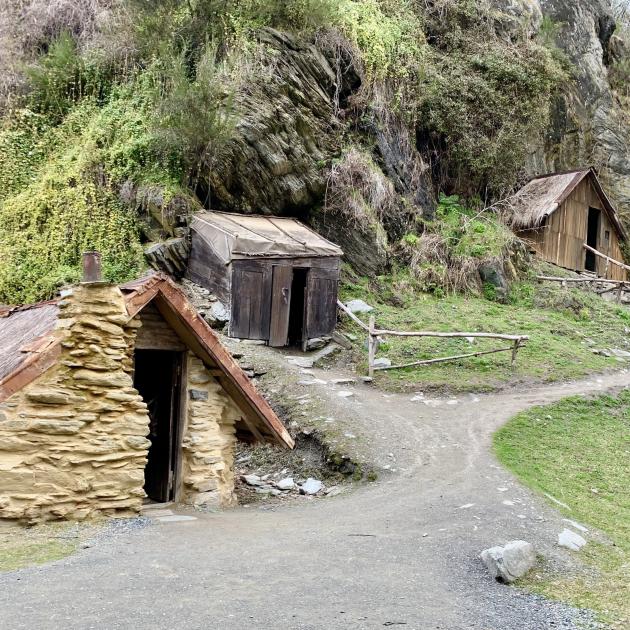 The Chinese goldminers built their little huts alongside Bush Creek. Photo: Justine Tyerman.
Justine Tyerman revisits childhood haunts and learns the story behind the ruins where she used to play.

Holidaying in Arrowtown as a child, I was aware of the overgrown ruins of goldminers’ huts alongside Bush Creek, a small, shady tributary of the Arrow River. On long, hot Central Otago summer days, we often played in the creek near the ruins under the shade of the willow trees, but back then little was known about the history and inhabitants of the huts.

Last year, while on a winter e-biking and motorhome road trip revisiting my favourite childhood haunts, I cycled along Bush Creek and learned all about the Chinese miners who built the little village, where they came from and the hardships they endured. 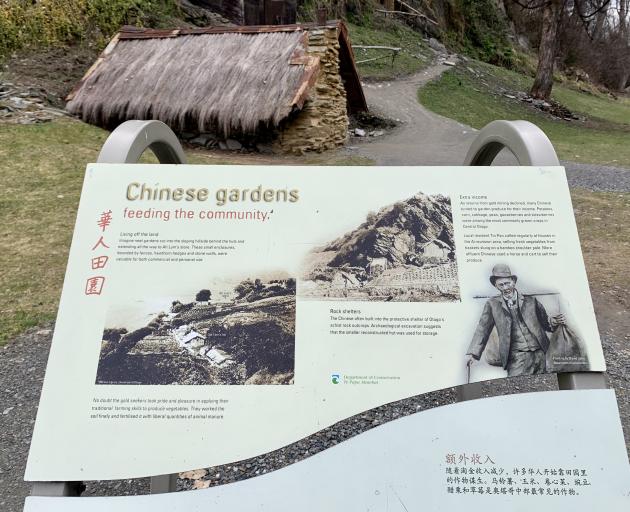 By 1865, Otago’s first gold rush was over and thousands of European miners began leaving for new fields on the West Coast. Fearing the economy would collapse, the Provincial Council invited Chinese miners to travel to Otago from the Australian goldfields. 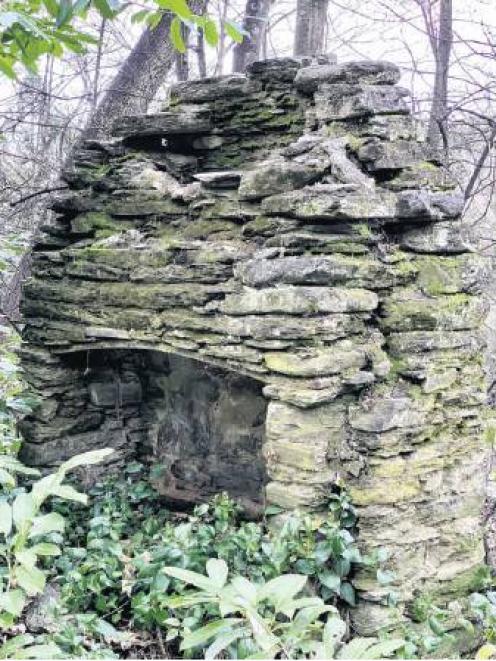 Some of the dwellings are yet to be restored. This is how I remember them as a child. PHOTO: JUSTINE TYERMAN
From the late 1860s to the 1880s, about 8000 Chinese came to Otago and Southland with the aim of mining gold, making money and returning home.

Between 1880 and 1900, the Arrowtown settlement was home to 16-20 men, who built a row of simple sod huts separate from the township in one of the coldest locations in the area. It was a lovely place to play on a scorching hot summer day but in the winter it would have been ferociously cold, especially panning for gold in the icy waters of the Arrow River.

The first Chinese arrivals were received with an open mind. They earned respect for their diligence, which enabled them to make a living from land already worked over and abandoned by European miners. In 1865, the Otago Witness described them as "temperate, frugal and well-behaved".

The Wakatipu Mail of 1870 reported: "It seems astonishing how these industrious people manage to get gold, when everyone else has concluded there is none." 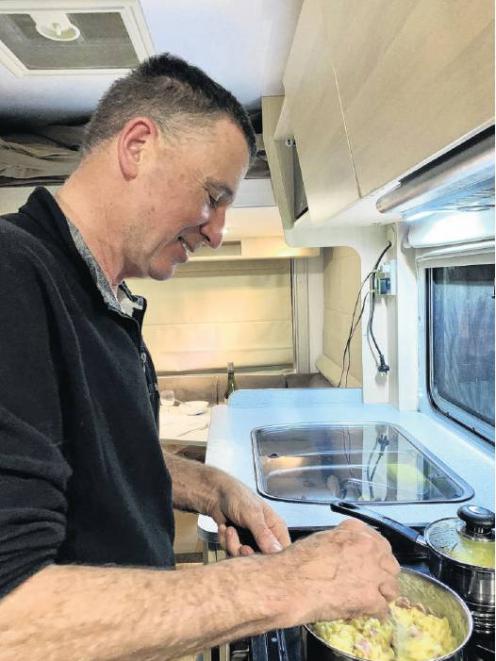 Chris cooks dinner in our warm and cosy Maui motorhome, a vast contrast to the conditions endured by the Chinese goldminers.
But as their numbers grew and their commercial interests expanded — by 1871, Chinese outnumbered Europeans on the Wakatipu goldfields — the immigrants faced resentment and prejudice.

They were marginalised and persecuted by European settlers and even when they died, they were kept apart from others in their own section of the cemetery, or in unmarked graves outside the cemetery walls.

Having earlier encouraged them to come, from 1881, the New Zealand government introduced a series of laws and an entry fee of £100 to discourage Chinese immigration.

The Chinese did their best to avoid trouble, keeping to themselves and depending on each other for support. Many were related by kinship, their passage assisted by New Zealand-based relatives in what became known as chain migration. Such fellowship made their harsh lives tolerable and reminded them of their responsibilities to their families at home.

Most dreamed of returning with enough money (about £100-£200) to buy a small farm, a goal they could achieve after around five years of hard work and frugal living.

Ah Lum bought the building, originally built in about 1883 by market gardener Wong Hop Lee, in 1909. It measured just 7.5m by 4.8m, with local schist providing the walls and floors, and corrugated iron the roof. Wooden partitions divided the space into five rooms — a bedroom, kitchen, strong-room, bank/office and main room with a coal range. The loft also offered accommodation for visitors and travellers.

Chinese miners used Ah Lum’s store as an unofficial bank and a community meeting place where they could chat, smoke and gamble among friends. Gambling and opium smoking no doubt provided a way to forget the grimness of their lives.

Despite long hours of work and limited means, the Chinese placed great importance on traditional foods, medicines, customs, beliefs and festivals. They knew how to enjoy themselves, especially at times like Chinese New Year when they celebrated with roast pork, brandy and firecrackers.

After Ah Lum’s death in 1925, the store closed and fell into disrepair. It was restored in 1986 and now provides a wonderful glimpse of what was the hub of the village.

"The floors were bare but most of all I can remember the smell — warm, delicious, spicy and mysterious. I can still smell it," recalled a visitor to Ah Lum’s store last century.

I could smell the spices, too, ingrained in the wood ... mixed with the distinctive waft of damp schist. 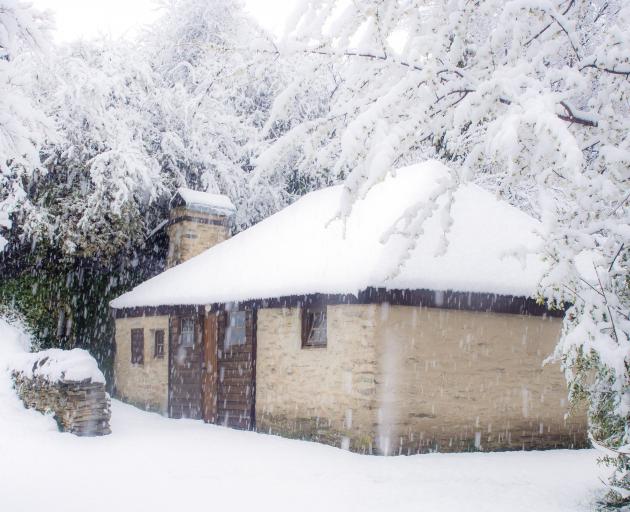 Ah Lum's store after a mid-winter blizzard. Imagine how cold it must have been for the inhabitants. Photo: Rem Vis.

Below the store stands a stone outhouse, all that remains of Ah Wak’s wooden cottage that burnt to the ground in the early 1900s. Other restored dwellings, marked on a map of the village, belonged to Tin Pan, Su Sing, Kong Kai, Kong Lum, Ah Gum and Old Tom.

They built simple sod huts using meagre resources. Furnishings were limited to a sleeping platform and storage boxes. They would have offered little protection against the snow and frosts of the long winter months. The only decorations were inscriptions written on red paper wishing good fortune, placed outside the door or inside the hut.

Neat gardens were cut into the sloping hillside behind the huts, bordered by hawthorn hedges, fences and stone walls. As returns from gold mining dwindled, many Chinese turned to market gardening for an income, growing potatoes, gooseberries, cabbages, peas, corn and strawberries. Skilled vegetable growers, they applied animal manure to enrich the soil. Tin Pan used to make his rounds of the township selling vegetables from baskets slung over a bamboo pole which he carried on his shoulders. More affluent Chinese used horses and carts to sell their produce but for most, walking was their only means of transport.

Without busloads of tourists, Arrowtown was once again the sleepy little town I knew long ago. Photo: Justine Tyerman.
Until the 1980s, when New Zealand opened its doors more widely to immigration from China, the majority of the Chinese population could trace their ancestry back to Cantonese peasant farmers and rural craftsmen. Most came from Guangdong in South China, where life was a struggle for survival against overpopulation, unemployment, disease and political turmoil.

Gold-seeking offered an escape from poverty. Those who helped finance a relative or friend to travel across the world imparted a gift of "li shung" — meaning "to give life". From the mid-19th century, a steady stream of migrants sailed for the goldfields of the United States, Canada, Australia and from 1865, New Zealand. The attraction was irresistible. A hard worker could earn about six times as much from goldmining in a year than from labouring in China, and save about two-thirds to take home.

The majority were young, poorly educated men or boys. However, one in seven gold-seekers died in New Zealand leaving families back home in mourning and with no means of support.

After the tropical climate of Guangdong, the Chinese newcomers must have been shocked by Central Otago’s bitterly cold winters. In our crib built in the 1950s, ice would form on the inside of the bathroom windows and the water would freeze in the pipes unless they were wrapped in insulation. It was even colder in Bush Creek, a shaded valley that seldom saw the sun in winter and was often under a blanket of frost and snow. How the Chinese miners survived the winter in their modest little huts astonished me. 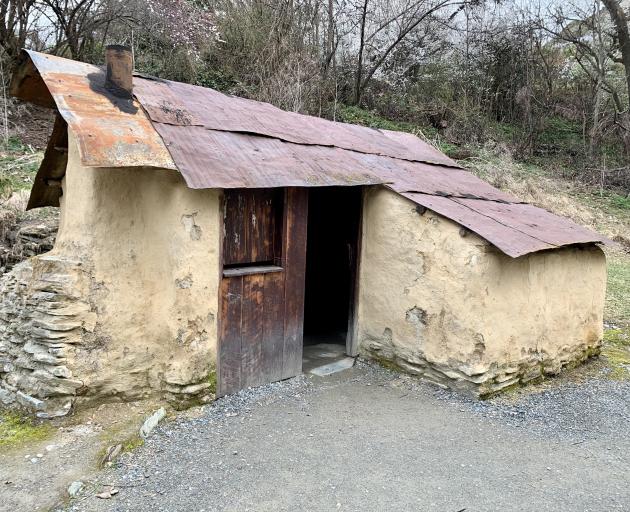 The dwellings would have offered little protection against the snow and frosts of the long winter months. Photo: Justine Tyerman.
By 1890, Otago’s easily worked gold was exhausted and many Chinese miners moved on. Some returned to China, some went to the West Coast goldfields, while others found work as market gardeners. Those who remained in Arrowtown grew into lonely, old men with limited means, while those who returned home found they had lost touch with their families and had outlived their own generation. A few even made the long voyage back to New Zealand.

The ageing Chinese miners had to depend on each other for support. They were specifically excluded from New Zealand’s Old Age Pension Act in 1898. They longed to be buried in ancestral cemeteries in China, where they believed their spirits would find rest. Fundraising among wealthier Chinese enabled hundreds of elderly men to make the final journey home and provided funds for some to be exhumed. Tragically, the last ship carrying nearly 500 bodies back to China sank off Hokianga in 1902. 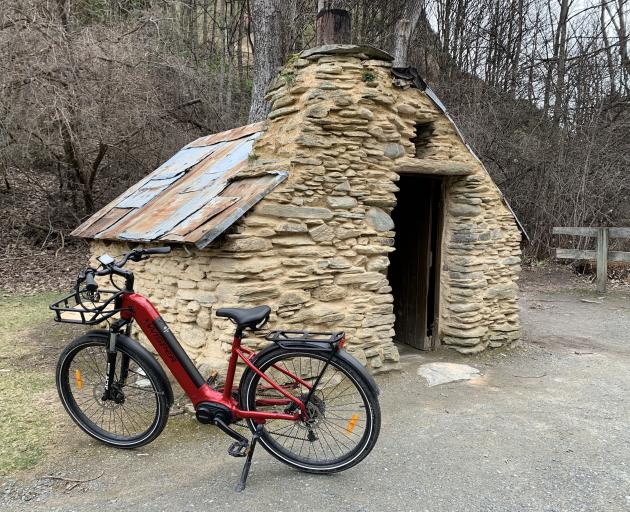 I cycled along Bush Creek, I learned all about the Chinese miners who built the little village. Photo: Justine Tyerman.
As time went by, the Chinese who remained in New Zealand began to experience less harassment. They were no longer seen as competitors for the gold and were largely remembered as "honest, hard-working and kindly people".

By the turn of the century, most of dwellings had been abandoned and left to decay. Ah Gum, the village’s last inhabitant, died in 1932.

In 1983, archaeologists excavated 25 sites and uncovered many artefacts, including coins, crockery, bottles and opium pipes, now on display at the excellent Lakes District Museum in Arrowtown.

As I explored the settlement, I fancied I could hear Ah Lum bargaining with his customers, see Tin Pan setting off to sell his vegetables to the town’s folk and Ah Gum heading up the river in search of gold. I felt deep sorrow for those hard-working Chinese men who were ostracised by European society and endured the brutal cold and searing heat of Central Otago’s extreme climate in the hope of one day returning to their families with enough money to buy a small property. Many never made it back home.

Our Maui motorhome at the Arrowtown Holiday Park. Photo: Justine Tyerman
y late afternoon, the temperatures began to plummet, turning Bush Creek into a deep freeze. Thankful for my zippy new Wisper Wayfarer e-bike, I whizzed along the riverside Millennium Track in turbo mode and was home to our warm and cosy Maui motorhome in no time. As I sipped the tummy-warming gluhwein brewed up by my husband Chris and thawed out in a hot shower, I envisaged the miners returning home to their cold little huts, lighting fires, cooking dinner and trying to warm up after a day searching for gold, knee-deep in the freezing waters of the Arrow River. How on earth did they ever manage to dry their clothes, I pondered. I was left with the utmost respect and admiration for those hardy, industrious, frugal, long-suffering men who, in 2002, finally received a formal apology from the New Zealand government by then-prime minister Helen Clarke for discrimination against the Chinese settlers. Not before time.