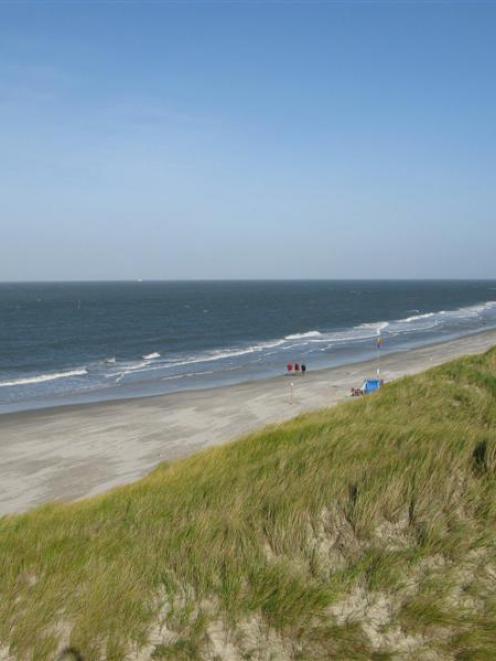 Amrum beaches are exposed to the North Sea breezes. Photo by Jeff Kavanagh.
Healthy eating, sessions in the sauna . . . with the best of intentions, Jeff Kavanagh heads for the island of Amrum for a "wellness" weekend.

Our moustached, sailor-suited waiter, Anton, was hovering impatiently beside our table; I'd managed to order a drink, but deciding between the frikadelle (meat pattie) and the pea-and-bacon soup was taking a bit of time.

My indecision was fuelled by the fact that my girlfriend and I were on board a ferry headed towards the German island of Amrum for a "wellness" weekend of healthy eating, brisk walks, and sessions in the sauna.

Unfortunately, the ferry's menu, with its goulash soup and nordseekrabbensalat (shrimp cocktail), wasn't overly conducive to our healthy intentions.

Eventually, I went for the soup.

"With a frankfurter?" Anton inquired.

Resistance, I realised, was futile.

As it turned out, it was exactly this type of food that was best suited to our few days on the windswept North Sea island, especially given the time of the year we were there: late autumn.

The perfect recipe involved hearty comfort foods and drinks consumed in beachside restaurants after a long walk in the fresh salty air, and then cycled off on the way back to our lodgings.

Lying about 20km off the coast of northwest Germany, Amrum is only about the same distance again across, squared in size, and is incredibly flat - its highest point is the top of a 32m-high sand dune (which presumably fluctuates every time there's a decent squall) - it is also very easy to travel around.

Having caught a public bus from the ferry terminal in Wittduen, in the south, up to our holiday apartment (the island, with its permanent population of 2300, was small enough for the driver to recognise the apartment by name) in Norddorf - which literally translates as "north village" (there's also a corresponding Sueddorf in the south) - we had no need for motorised transport until we took a taxi back a few days later.

A couple of well-maintained rental bikes set us back 10 (NZ$25) each for the weekend, and, as the weather was not too inclement (autumn is often quite wet), they were perfect for the short trips from our apartment to the island's blustery beaches and rolling sand dunes.

Sections of these dunes, which run the length of Amrum's west coast, stretch to more than a kilometre wide, eventually tapering out into a long spit in the north of the island.

It was here, on this thin peninsula flanked by a long sandy beach on one side, and marshlands on the other, that we conducted our daily constitutionals.

Signs of early settlement on the island date back to the Stone Age, and, despite the obvious presence of modernity, such as wooden walkways through the dunes, and ablution blocks with flushing toilets along the beaches, there were times during these walks when it was possible to imagine little had changed since.

On such occasions we would wander through the drizzling rain on an abandoned beach or emerge from the dunes into the marshlands, startling hundreds of wild geese and seabirds and sending them skywards.

Like its more famous cousin in the north - Sylt - the island is known for being somewhere you can get away from it all (given Sylt's reputation as a millionaires' retreat, replete with five-star restaurants and luxury designer stores, the smaller island can lay greater claim to this actually being the case).

Consequently, the concept of "wellness" is something readily associated with Amrum, evident in the number of holiday homes and hotels offering spa, sauna and massage facilities.

Our apartment, part of a complex of renovated farmhouses, was just such a place.

And although my girlfriend and I arrived with the best intentions of spending a long session or two sweating it out in the sauna, they, just like our plans concerning our weekend's healthy eating habits, were soon abandoned.

The problem was that although we managed to put in a couple of laps in the apartment complex's pool - which was about eight metres long and lukewarm - the sauna had been turned off earlier in the day.

Not being prepared to wait for the hour it was going to take for it to heat up, we instead headed back to our cosy apartment for a couple of glasses of wine.

In the end, we spent both our nights on the island in this fashion: crashed out on the couch, happily worn out from our day's excursions.

That wasn't to say that there wasn't any nightlife on the island.

Our taxi-driver on the trip back to the ferry regaled us with stories of the Queen of Denmark drinking her fill of whisky at the island's most famous nightspot, the Blaue Maus (Blue Mouse).

Norddorf itself boasts a decent collection of restaurants and bars.

It was rather that quiet nights in our apartment, with its traditional thatched roof and underfloor heating, were more in keeping with our idea of a relaxing weekend.

As is inevitable with weekends away, it was soon over, and we were back on the ferry and sailing away from the little island.

Anton, the waiter on the trip over, was gone, but in his place was a similarly impatient bloke dressed in white.

Fortunately, for both of us, there was no dithering over the menu this time around; I'd just spent most of the morning braving the elements and thoroughly deserved what's known as a Tote Tante (or "dead aunt") in northern Germany - a hot chocolate with whipped cream and a shot of rum.

-Jeff Kavanagh is a writer from Dunedin, currently based in Hamburg.