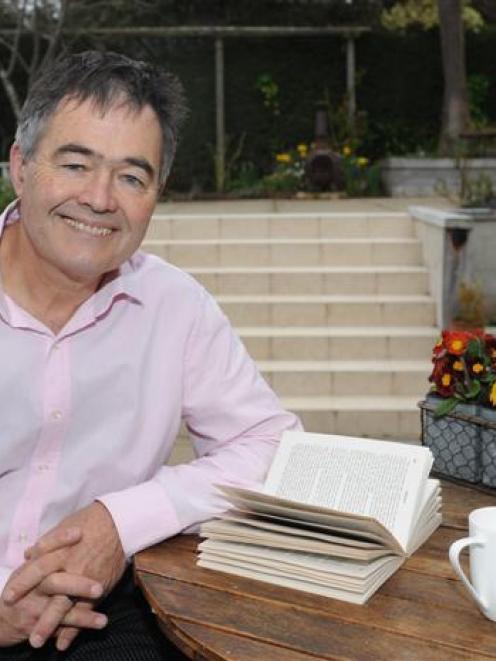 Dunedin city councillor Dave Cull is about to end his first term on the local authority, and has put his hand up for the council's top job.

With nine candidates, including himself, on his Greater Dunedin ticket, success could see him heading a group with a majority, on a council more recently made up of 15 independents.

But he says that would be a good thing for a city that needs a "collegial" approach to reining in debt, and attracting business and people to Dunedin.

I'm standing for the mayoralty because I see the need for far more engaging and inclusive leadership than is being shown at the moment.

Tell me then, how you would go about engaging and including.

Well I think the context is that the current council and mayor ...

... of which I'm one, but the majority has not engaged genuinely, has not listened genuinely to the public, and has, worse than that, not got a cohesive, connected view of the projects the council is involved in.

They tend to be isolated from one another, and the impact on one another is not fully appreciated till the negatives hit, I suppose.

So I see a need for developing a much more future-focused vision for the city that looks at everything in a connected way.

Wouldn't it be great if our aim was in 20 years the whole of the city had good, affordable healthy housing; sound housing.

Wouldn't it be good if we had top-notch infrastructure, including broadband over the whole city, and we didn't have ourselves saddled with enormous debt we have to repay, in order to get it.

Wouldn't it be good if we didn't just pay lip service to the challenges of energy depletion and climate change, and actually were doing something, now.

How do you do that, without it just being a waffly vision thing? It's all very well to say "I want to do that ..."

Each of those committees has councillors on it, and staff, and stakeholders from the community.

And I think that's a model for getting a consensual vision from the community.

You get people in the room, and you thrash out the objectives, and where you want to go, and then you work out how you are going to get there, and you form the road map.

So you don't do it in isolation, you actually engage the community.

The work actually should be done out of committee.

It should be done before committee, before council meetings.

Unfortunately, some of the decisions seem to be made on the hoof.

Well, I think in purely social and economic terms, I would like it to be a place with much more job and business opportunity than it has at present.

I see one of the issues facing our community is we've got a fairly large pool of older people, a whole lot of younger people, of course, because they're students, but in the middle there's quite a gap.

What we need for the future prosperity, and for the balance of our community, is businesses and jobs for those people, the family-aged people, if you like, in the middle.

And I think that should be a priority for this council, the next council - whatever council, to try for.

We've seen things like rates relief, and other economic development initiatives; what apart from those, or including those, would you like to see to make that happen, because that's a hard thing for a council to do?

There are two ways I think I would focus on it.

One is be a lot more business friendly than we are now.

What does that mean?

When someone wants to do anything, whether it's get a building consent, or whatever, instead of saying "here's the things you've got to comply with", [the council needs to say] "how do we facilitate making that happen?" So, it's basically a culture change.

In a broader sense, you look and see what infrastructure would enable businesses to be more successful.

In the 19th century, getting your product to market, it was railways.

In the 20th century it was roadways, in the 21st century it's broadband.

As an infrastructure, all businesses will need [that] to facilitate getting their goods to market.

So I think that the priority for this council ought to be facilitating the provision of fibre-optic broadband, and I don't mean that we necessarily pay for it.

That's what the digital strategy is all about.

You've talked about debt, and you've also made mention on your website about the likes of "opening the books" when the new council comes in. What books are you talking about, and what is it you don't have access to as a councillor?

I think that the full implications that the amount of debt that this council has taken on is only now being made clear to councillors.

Give me an example of an implication.

That we can't ... well, for instance, staff are being told that for the next 10 years, no new projects are being put on the books unless another one disappears.

Well, [finance and corporate support general manager] Athol [Stephens] has been saying that for some time ...

Yes, but in very muted tones, and if you recall during the debate about the stadium, one of the warnings I gave, and I wasn't the only one, I said there will be opportunity costs.

If we put all these resources and all this debt into this, there will be things we can't do.

Now we're being told two things: one, council is beyond the limit of its debt and we cannot spend any more, or borrow any more, unless we find a way of getting rid of other projects.

The other thing we're being told, which was at odds with what we were assured about, is the situation of the council-owned companies.

We were told they were managing fine and it was perfectly proper for them to be providing the dividends - now we're being told we're up against the wall, we have reached the limit of our debt, and indeed we cannot even expand.

In what forum are the councillors being told that about the companies?

We're being warned by directors of the companies.

In terms that they are in trouble, or that they cannot expand their dividends further?

They cannot expand their dividends further, and there is some doubt as to whether they can continue to pay the dividends that they already committed to into the future.

In terms of debt, do you believe the council is in serious trouble?

It's concerning because of the opportunity costs.

It's concerning because there are, every time we look at new things that we know we have to do, or that we have promised to do, we will find it very, very difficult to do them, because we have reached the limits of our debt carrying capacity.

Now that doesn't mean that the council couldn't borrow more, but if it did, it would have an impact on rates that would be even more unacceptable than the increases we are projecting now.

But also it would have implications for our Standard and Poors rating.

Some people are claiming that the council is in real financial trouble, and using terms like "broke". Do you believe that is the case?

The unfortunate reality for ratepayers is councils can just put a bigger impost on ratepayers.

But that is not sustainable on the business community or on the residential community.

We [Greater Dunedin] are very grateful for any donations, and we are putting money in ourselves.

You don't have financial backers this time?

I think we have received a couple of donations, I don't know who they're from, but they're not in the mega-millions by any means at all.

We are funding our own campaign as it stands.

What are your politics in a national sense?

I've never belonged to, or supported, one political party.

I would probably call myself a pragmatist with rose-tinted spectacles.

Who do you see as your supporters? You've got an organisation behind you?

We incorporated it mainly to protect the name, the brand; it's very small.

There's 11 members, and nine are standing for council, and the object of Greater Dunedin is to get good people on to council.

It's not a party in the sense that we'll be saying to people: "This is how you have to vote."

Do you think it would be healthy for Dunedin politics if Greater Dunedin got a majority on the council?

I think it would be healthy for several reasons.

One is it would inject much-needed new blood and energy and talent and vitality into the council, and it would inject what I would hope would be a collegial team-way of doing things.

What do you think of the idea, which is out there, that ratepayer funding for the stadium should be completely cut off.

The stadium is costing us money, it will continue to cost us money, and I think that's regrettable, and I warned about it.

It will continue to cost us money whether it's open, closed, used or not used.

We can't change that, that's a given.

What we can hope to do is earn some revenue from it.

In order for that to happen, it has to be open.

Now if, for instance, the people building it came to us and said, "We need some money for a scoreboard," which they haven't done, I would say, "Look guys, they're not essential. You can open it anyway. Find the money for that somewhere else."

However, if I were faced with the choice between finding another half million to actually open the doors, and leaving it nearly finished, but closed and not able to get any revenue in, I would have to look at the alternative.