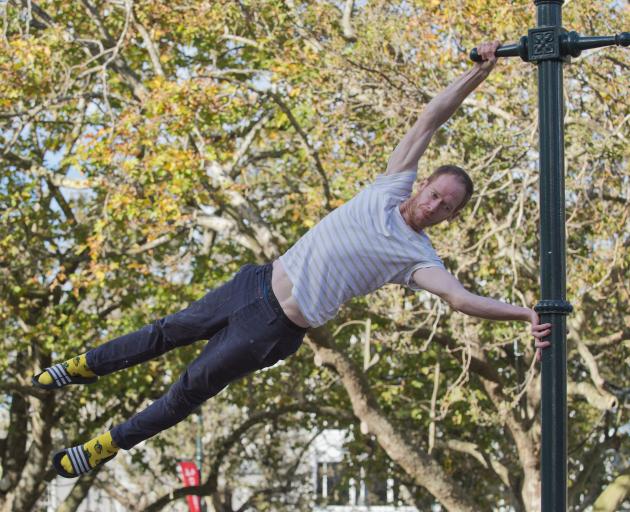 Swinging into the Octagon yesterday ahead of his Dunedin Arts Festival show is physical theatre and circus performer Thom Monckton. Photo: Gerard O'Brien.
A creative show about the creative process is set to have Dunedin audiences cackling.

The Artist by physical theatre and circus performer Thom Monckton reaches the city this week for the Dunedin Arts Festival 2021.

The non-verbal physical comedy show, interspersed with circus skills, was created in Finland by Monckton and Circo Aereo director Sanna Silvennoinen and is touring New Zealand for the first time.

The work follows the same concept of his previous show, The Pianist, which was based on his "small" piano-playing skills.

Monckton said that show proved a success and so Silvennoinen asked him: "What else can you do?"

The Artist is set in an art studio and follows an artist trying to find inspiration and create work.

He finds procrastination instead.

"It is kind of a little bit meta in the fact that it’s a show about the creative process.

"The creativeness of procrastination."

"It’s not necessarily dance, or circus, or theatre, or comedy, but it is all of those things."

People of all ages and cultures could get something out of it, he said.

"Sometimes it’s really fun when a show gets buzzy because the audience is really self-sustaining — they start laughing at themselves.

"And then the audience starts laughing at themselves."

The show changed depending on the audience and a lot of improvisation was involved, Monckton said.

But it didn’t always go to plan.

"The worst thing is when I come up with an idea 30 seconds before the show opens, because I am in such a weird state of mind and somehow I think it’s a good idea because I’m quite nervous and I’m not thinking rationally."

He discovered circus performing at a young age and knew it was what he wanted to do, Monckton said.

He trained at circus school in New Zealand and at a physical theatre school in Paris.

"I love that environment of entertaining and causing laughter."