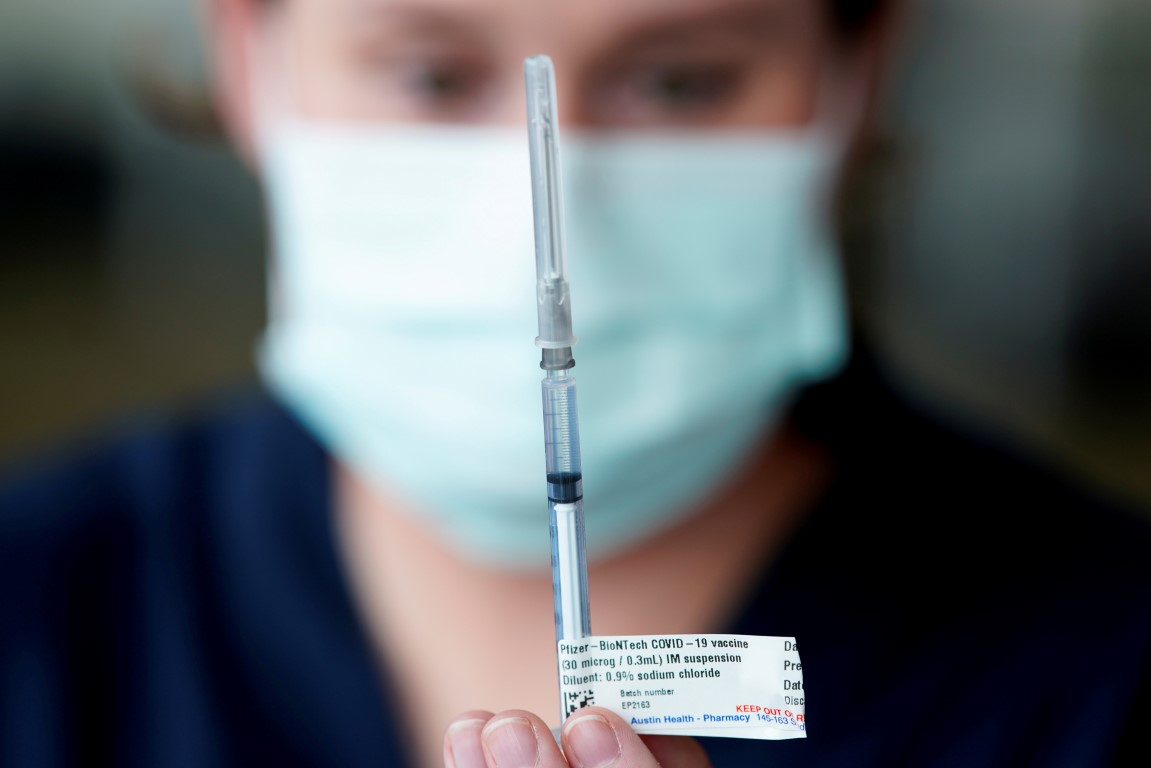 A healthcare professional prepares a dose of the Pfizer vaccine in Melbourne. Photo: Reuters
The Morrison government is aiming to have all Australians inoculated with at least one dose of coronavirus vaccine by the end of the year.

But Trade Minister Dan Tehan says the world is still under the cloud of a pandemic and things can quickly change.

Last week the government's vaccine programme suffered a major set-back after health authorities recommended the AstraZeneca vaccine should only be given to people above 50 due to the risk of blood clotting.

It was the vaccine the government was relying heavily on, but it has since secured an additional 20 million Pfizer vaccine doses that will be shipped from abroad later in the year.

"That is definitely the aim, that is the goal we have set trying to have all Australians have a dose by the end of the year," Mr Tehan told Sky News' Sunday Agenda programme.

Prime Minister Scott Morrison had originally planned to have all Australians vaccinated by October.

"When you are dealing with a pandemic, there is a lot of unknowns and you have just got to make sure you set your goals and are prepared to adjust those as things occur," Mr Tehan said.

The minister is about to embark on a "vaccine diplomacy" trip to Europe from Wednesday.

He will speak with the European Union and his ministerial counterparts in France, Germany and Brussels.

"I will also be meeting the director general of the World Trade Organisation to talk about what we can do to ensure supply of the vaccine, not only for Australia but globally," Mr Tehan said.

Pacific nations will soon have shots of coronavirus vaccine manufactured in Australia to distribute, with the Morrison government promising to export 10,000 doses a week.

The government says it's going to put its domestically produced AstraZeneca product to good use in neighbouring countries, starting with hard-hit Papua New Guinea and Timor-Leste.

Fiji, the Solomon Islands and Vanuatu will also begin to receive doses in the coming weeks.

In a joint statement, Health Minister Greg Hunt, Foreign Minister Marise Payne and Minister for International Development and the Pacific Zed Seselja said: "Our region's health security and economic recovery is intertwined with our own."

The new advice on the AstraZeneca vaccine has forced a temporary halt to vaccinations on Queensland's Cape York Peninsula and in the Torres Strait, where the northernmost island is just a few kilometres, or a short dinghy trip, from Covid-hit PNG.

People in those northern reaches who've had a first AstraZeneca jab with no adverse effects have been advised to go ahead with the second follow-up jab.

But the Torres and Cape Hospital and Health Service says it has no surety around plans for the over-50s, who are the majority of the region's population.

"We are yet to receive information from the Commonwealth as to how and when the necessary doses of Pfizer might be delivered to regions such as ours in order to comply with the new vaccination recommendations," the service said on the weekend.