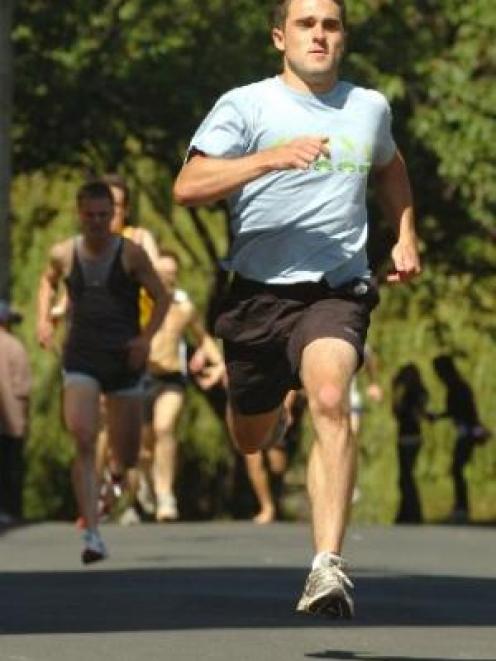 On the move . . . Todd Mansfield sets off at a blistering pace as he attempts to get distance ahead of the chasing pack in yesterday's clock tower race. Photo by Peter McIntosh
The chimes tolled for Todd Mansfield yesterday as the Dunedin-based sprinter achieved his goal; winning the University of Otago clock tower race and breaking the record in the process.


Before the race, marketing student Mansfield (22) said: ‘‘I want to beat the record,'' despite having never competed in the 372m event.

‘‘Usually, nationals are a week after clock tower race, so in previous years I have focused on that. But with them [the national athletics championships] extended to March, I thought I would give it a go.''

The race requires competitors to beat the noon chimes, which sound for 52.5seconds, and Mansfield said he would aim to take the lead early so he would not get boxed in by the other 22 competitors.

As the chimes began, he used his sprinting experience in the 100m and 200m to open up a sizeable lead against the other runners, comfortably beating the chimes in a time of 48.14, under last year's record of 48.3 set by Tom Clendon.

‘‘I enjoyed that,'' Mansfield said after hearing of his time. ‘‘The corners were very tight, but I ran quite close to cut down on the distance.

‘‘I wasn't really sure how fast to go out, because this event hasn't been done by a sprinter before; it has been dominated by middle and long distance runners.''

Otago University Harrier and Multisport Club secretary Sam Kidd, who finished third in the race in 51.23seconds, said it was a good turnout this year, as entries had been bolstered by students participating in the Fresher Competition.

‘‘They added a bit of energy to the event, but the seasoned pros got out to the front pretty quickly.''

Having run in the event for four years, Kidd said it was no different from previous years ‘‘with plenty of elbows in the first 100m, before you get to the corners and it spreads out a bit''. ‘‘It can get pretty vicious out there.''