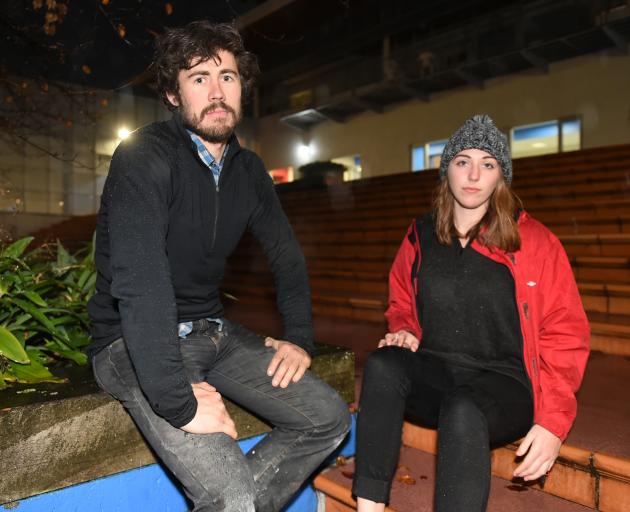 Phedders United members Louis Brown and Mary Beban fear proposed cuts to the School of Physical Education, Sport and Exercise Sciences, pictured in the background, could damage its reputation. Photo: Gregor Richardson.
Past and present physical education students are worried the University of Otago is cutting parts of the school which make it special.

The concern comes after the university confirmed it proposed to cut 13 full-time equivalent positions from the School of Physical Education, Sport and Exercise Sciences and reduce the number of papers from 65 to 33.

The cuts come amid falling student numbers and financial difficulties.The university believed the changes would save it $2 million per year.

A group of alumni and current students called Phedders United has campaigned against the cuts, which they fear will damage the reputation of the school.

Spokeswoman Mary Beban, who graduated from the school last year, said the cuts were largely focused on the practical parts of the course.

Significant cuts to outdoor education were proposed, including to camp which was popular with students, Ms Beban said.

Going to camp and participating in the dance papers, which were also on the chopping board, created a sense of community among students which made the degree stand out against other university courses, she said.

The group feared the focus on research-led papers would put people off studying at the school in favour of Otago Polytechnic,  which had a greater focus on the outdoors.

They accepted that research and theory-based papers were important.

"However, without the ability to apply this theory in practice it becomes a sterile and clinical degree."

The group also felt their views had "fallen on deaf ears" with the university.

Pro-vice-chancellor sciences Prof Richard Barker said it was premature to comment on the future shape of the curriculum as decisions had not yet been made.

Asked if the reputation of the school was at risk, Prof Barker said changes were needed to make the school sustainable.

"The school has lost 40% of its students over the past five years and has sustained large deficits.

"These are strong indicators that it’s time to work on a new brand and identity that will be much more successful.

"Staying the same is not an option, and we now have the opportunity to offer more attractive courses to the next generation of students coming through."

When it came to consultation, Phedders United had participated in a stakeholder forum in March where views on the future of the school were discussed.