Kindness the inspiration to give back 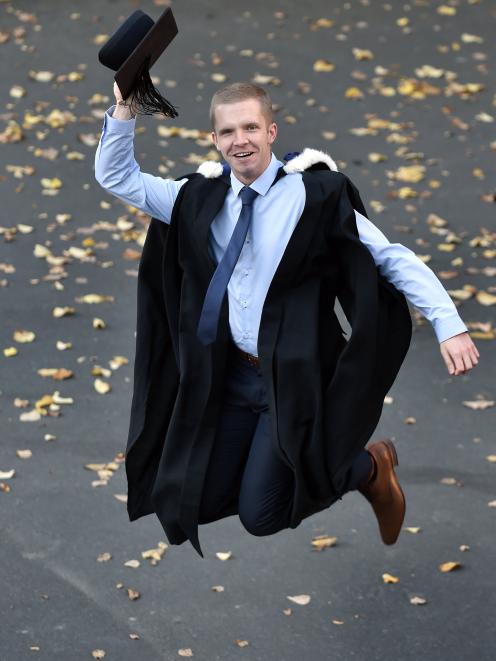 Luke Barker (21), who is set to graduate with a bachelor of science in neuroscience at the 4pm ceremony in the Dunedin Town Hall today, owes a lot to a Tauranga relief teacher who helped him successfully apply for the Bay of Plenty $10,000 AMP regional scholarship in his final year of high school.

The scholarship was funded by Tauranga  company Rothbury Financial Services.

"I honestly didn’t expect to get anything from it and then I got rung one lunchtime when I was at school saying I had been shortlisted for an interview.

"I was ecstatic, but at the same time thought there was no way I was going to be top of the pile."

After lunch, he happened to mention being shortlisted to his relief English teacher, who organised interview coaching through the school’s career adviser.

This made a "massive" difference. Without the scholarship he would not have been able to afford to attend Otago University and he had been looking at working full-time for a year to save for the move.

"It was life-changing really."

Not being able to afford to move to Otago was linked to tragedy earlier in his life which meant he and his two older brothers were brought up in a single-parent household.

His father died from lung cancer when he was 3. The family moved to New Zealand from Zimbabwe with his mother and her new Kiwi husband when he was 5, but tragedy struck again.

"[My stepfather] passed away suddenly in 2002 of a heart attack when I was 6, just before my 7th  birthday.

"So money was pretty tight for us growing up."

Since moving to Dunedin, he had become involved in charity and church groups and his giving was in part inspired by the kindness of the relief teacher which made such a difference. He had been involved in the Relay For Life for three years, which raises money for the Cancer Society, and helped raise $8500 with Cumberland College residents through Shave for a Cure.

Being involved in community groups was also inspired by his love of Dunedin and a desire to give back to the city.

"I moved to Dunedin without ever having been south of Taupo and I fell in love with it from the moment I came here."

His giving came full circle last year when he helped a Cumberland College student, who was also from Tauranga, after he became unwell.

It was only later that he worked out the first-year student was the son of the relief teacher who helped him with his scholarship.

Mr Barker is now studying towards an honours degree in neuroscience while working as a residential assistant at Cumberland College. He hoped to later study medicine through postgraduate entry.