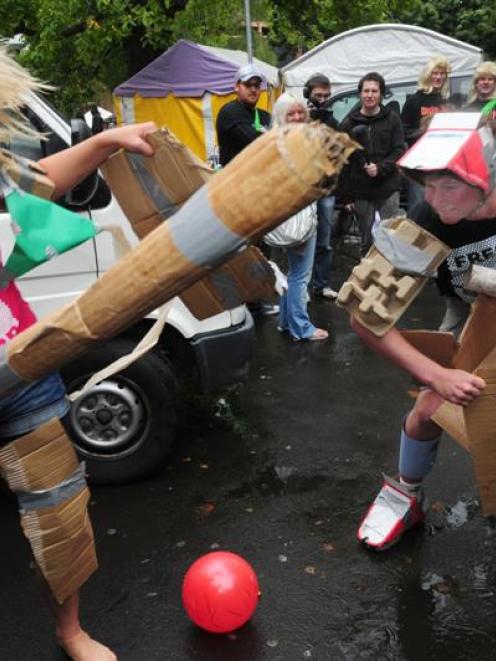 Fresher Comp competitor Vanessa Murphy (18) readies herself to fight Jason Zwi (17) during the box war event yesterday. Photo by Craig Baxter.
Primed to attack, three cardboard-clad first-year university students were unleashed upon each other to the delight of a crowd gathered in the union yesterday.

It was day one of a week of painful and embarrassing challenges for the 10 Fresher Comp contestants and poor weather had not dampened their spirits.

Three teams each equipped one member with cardboard armour and weapons, all employing trusty duct tape for construction and fitting, and let them go at each other in the aptly titled "box war" challenge.

Cries of: "Go for the face", "Go for the eyes" and "Pull her hair" could be heard from the crowd before Vanessa Murphy (18) was announced the winner after a fierce and physical battle with Jason Zwi (17).

Competitor Sean Walker (18) was commended for his efforts.

Jason walked away with red marks all over his body and scratches on his neck.

"That's what you get for fighting girls.

"They scratch," he said.

After taking 40 minutes to create armour, their boxes were destroyed in 10 seconds.

The day kicked off at 10am with a range of "games", ingredients for which included whipped cream, cheeseballs and razors.

"I dry-wretched as soon as it was in my mouth."

They also shaved balloons on their heads and smeared whipped cream on their faces before other contestants threw cheeseballs at them.

The next event was more physical, a 45-minute body attack workout, described as "pretty intense".

The day was rounded off with a round of laser force in the evening.