'No better place to be a student in NZ' 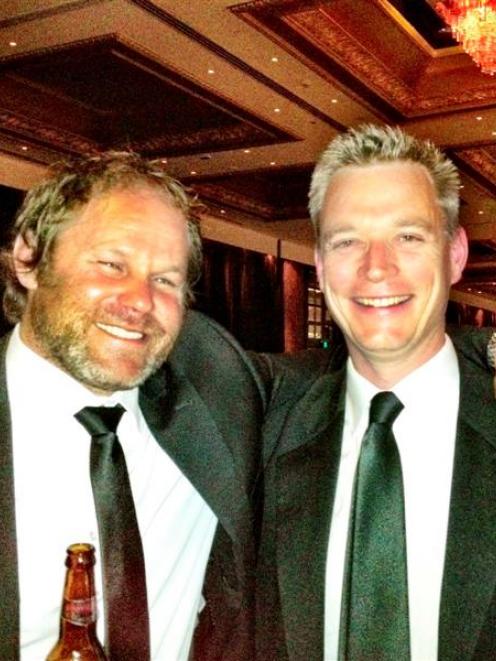 Josh Kronfeld and Christian May in Auckland in 2013. Photo supplied.
A couple of University of Otago graduates recall Dunedin's campus life in the 1990s as times of slavery and flea pits - a unique experience today's campus lacks. But they tell Shawn McAvinue why they would recommend the campus.

Former All Black Josh Kronfeld (42), of Auckland, has had two spells of study at the University of Otago - studying physical education between 1990 and 1993 and physiotherapy between 2005 and 2008.

In his final year at Hastings Boys' High School in 1989, he was unsure what he wanted to do with his life.

His teachers recommended the university and the idea of the distant campus appealed.

Most of his school mates had repeated sixth form or had not returned for seventh form, so he came to campus with very little connecting him to Hawkes Bay.

He soon discovered Dunedin life was a little different from home.

An Orientation ''slave day'' auction attracted about 400 senior students to bid for the ownership of him and the other new students.

''They would auction you off. You would have to strip down to your undies and they would make guys do press-ups and star jumps and you'd get bid off.''

A slave group could sell for between $50 and $600 and the money would fund the week's activities, when the slaves were at the ''beck and call'' of their owners.

''They get you to clean their flat, usually plying you full of alcohol at the same time, and take you around and expose you to everything that is Orientation and Otago - that was my introduction.''

He could not recall the auction price when the hammer fell on his group but he remembered it was not the highest or lowest, he said.

Despite ''not being a great drinker'' and being younger than the legal drinking age, he spent much of Orientation at pubs and parties.

''The pubs all closed at 11pm, which isn't a bad thing because it made for great parties.''

The university stopping the slave auctions and strictly policing late-night flat parties was absurd, he said.

''It just goes to show how politically correct and ridiculously dumb we've got ... closing all those things down just destroys the history that has surrounded the university.''

The campus was unique because it was surrounded by the student quarter, which set it apart from other New Zealand universities, he said.

The campus lifestyle had changed in the 12 years between his study, he said.

''Everything was at the university, all your pubs, you didn't have to walk past the start of George St. Now everything is in the Octagon - everything has moved slightly out of campus.''

More students needed to own a car today, he said.

The university needed to allow students to socialise and retain traditions to ensure the campus remained unique.

''Some of those attractions are why people come to the university in the first place. They want that social scene with their education.''

Despite the change, he would send his children to the university if he was not living in Dunedin.

''It's important to discover things for yourself and make your own decisions without mum and dad and to make your own mistakes so you can really grow.''

Any high school pupil who was unsure of their career path should enrol at a university.

The debt would be worth it.

''What an amazing exposure to life. It's the only place where everyone is from a different walk of life yet you all have one thing in common - going to this institute. Everyone should get exposed to that, even if it's just for a year.''

Another 1990s graduate, public relations manager Christian May (40), of Auckland, said he gained more than just his marketing degree at the University of Otago between 1992 and 1995.

He was 17 years old and living in Hong Kong with his Kiwi expatriate mother and heard stories about the Dunedin campus in a Hong Kong pub and decided to go.

''That's a huge learning experience, which is as important as learning the academic stuff.''

There were ''bills to pay, budgets to keep and houses to keep warm''.

Frost regularly formed on the inside of the windows but the more uninhabitable a flat was, the bigger the ''badge of honour'' for the residents.

''The ones that were really prepared to go back to basics were the ones who were the legends.''

He visited Dunedin most years and found the flats of legends were gone.

''The landlords have bowled them and they're all townhouses.''

The scarfie lifestyle had changed.

''I look around the campus now and those old [pub] institutions like the Cook, the Bowler and the Gardies are all gone and an essential part of the campus lifestyle has been lost.''

The cost of drinking in pubs had spoiled student culture.

''When I used to go to the Cook it was $5 a jug, so you could go out with $25 and still have enough for a feed of fish and chips on the way home. Now the cost of drinking in pubs is huge.''

Despite the changes, he would encourage his children to get their tertiary education in Dunedin.

''The benefits of an environment like Otago outweigh the additional cost.''

He had worked in London and Asia and his ''world-class'' university education had opened many doors.

And the people he met at the university remained his best friends, he said.

''There's no better place to be a student in New Zealand, I reckon, because there's nothing else like it.''