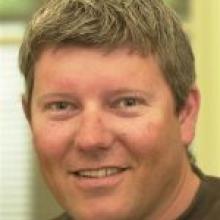 Gary Wilson
Retrieving sediment samples from the sea bed more than 2.3km below an Antarctic ice shelf has led University of Otago researcher Prof Gary Wilson to an inescapable conclusion: human activity has pushed the Earth to the edge of climate instability and it is up to humans to change that.

Ice an average of 2.1km thick covered 14 million sq km of the Antarctic. Scientists had already worked out that if the ice sheet melted completely, sea levels would rise by 70m, Prof Wilson said at a lecture on Thursday marking his appointment as head of the university's marine sciences department.

Ice melt was related to the amount of carbon dioxide in the atmosphere, and analysis of the core samples collected near McMurdo Station showed the Antarctic ice sheet would begin to destabilise at 400 parts per million (ppm) and would completely melt at 800ppm.

Sea level rise was not a problem for Earth, but was for mankind, which now lived on or near coastlines, Prof Wilson said.

Human activity had pushed CO2 levels from 280ppm to its present level in only 100 years, which Prof Wilson said was beyond the natural variability seen in sediment samples from the previous millions of years.

It was time for humans to think about the impact their activities were having on CO2 levels and the environment. Transporting goods from one side of the world to the other and manufacturing processes which burnt fossil fuels all added carbon dioxide to the atmosphere, he said.

" . . . do you really need to buy that item which has come all the way from China when you could buy one made down the road? Do you need to buy some items at all?," he asked.

"We need to think more and use less."