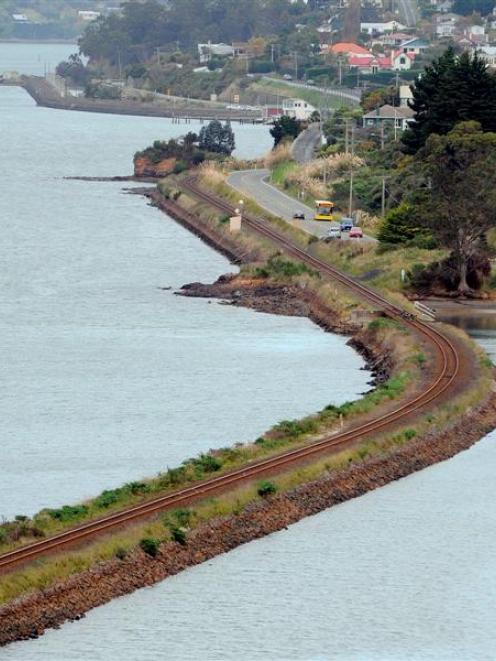 Part of the final section of the West Harbour shared pathway. Photo: ODT files
A $25 million contract to complete the State Highway 88 shared path to Port Chalmers has been awarded and work is expected to start before Christmas, it has been confirmed.

The NZ Transport Agency announced this morning the contract to complete the path's final section - from St Leonards to Port Chalmers - had been awarded to Downer NZ.

Dunedin Mayor-elect Aaron Hawkins - a Port Chalmers resident - was among the first to welcome the announcement.

"It's great that work will be underway soon to complete this really important link between Port Chalmers and the city centre.

"The facility is wildly popular as far as St Leonards, and this final stage is eagerly anticipated.

"Providing safer walking and cycling options is a key priority for Dunedin. As a resident of Port Chalmers, I'm well aware what a difference a completed shared path will make for all road users,'' he said in a statement.

Mr Harland said the safety improvement project was designed to increase safety for all highway users, including, in particular, pedestrians and cyclists.

The final 5km stage to Port Chalmers was considered the most complex, and work would also include safety improvements along SH88, including installing new roadside safety barriers, Mr Harland said.

The project would represent a "major milestone'' for Dunedin, and was a major road safety investment by NZTA, he said.

"Many people in the local community and across Dunedin will be thrilled that the final link in this shared walking and cycling path is about to begin.''

It would also help boost first impressions of the city for many visitors, he believed.

"As well as being a busy freight route for traffic to and from Port Chalmers, the highway is also the first view of Dunedin for the thousands of people arriving via cruise liners at the port each summer season.''

I am sure a whole dozen or so cyclists will use it on a given weekday.. Another stellar DCC/NZTA decision, nothing like more cycle-friendly paths. At least some of our central government taxes will be spent locally- better than in Auckland. Just think, Dunedin households number 50,000 x $4,000 average on fuel per year x 50% tax rate) is $100million and we get back $25m- WOW a bargain from Wellington technocrats. Do you think we will have another $75m spent in Dunedin spent on our "highways" next year. Your petrol/diesel taxes working for you-! not.

Lets hope somebody who is on Council has a say so in planning, sign off and it is not just a tick and flick like others have been in a lot of other areas.