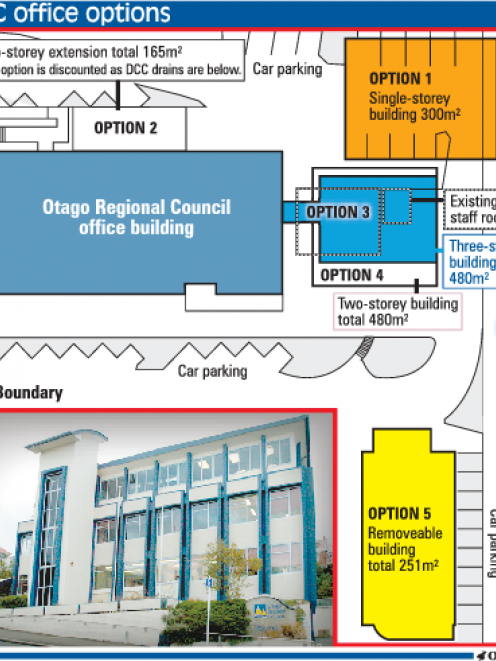 A removable council chamber or a new multistoreyed attachment are among options costing between $400,000 and $1.2 million being considered to ease space constraints in the Otago Regional Council's Dunedin headquarters.

A plan to deal with the overcrowded Stafford St offices by building a new multimillion-dollar waterfront headquarters was abandoned by the council two years ago in favour of looking at other options.

In the meantime, the "stressed" space needs of council staff and politicians had become more disruptive to the organisation, so the council had directed short-term on-site options be investigated, chief executive Graeme Martin said in a report to tomorrow's council meeting.

The council's architect, Oakley Gray, was asked to come up with a three- to five-year solution to the problem.

Tomorrow, the council will consider four options developed after the architectural company assessed the organisation had a shortfall in space of about 194sq m and needed about 120sq m for short-term growth.

Above that, 30sq m was needed for a meeting room.

Mr Martin said as an "immediate expediency" it was suggested part of the council chamber be partitioned off to provide some staff office space.

The council had turned meeting rooms and kitchen space into staff offices over the years.

"Further needed space adjustments can only come from relocation of some activity out of the current building complex."

It had previously been identified moving any activity off-site was a disadvantage because "highly networked" staff groups would suffer efficiency losses.

However, it would be cost effective if it could be limited to public and political space, he said.

The options of building a three-storeyed or four-storeyed adjacent extension would require the demolition of the staffroom and the need for alternative accommodation during construction, and would create noise and disruption.

An option of building a single-storeyed 300sq m block in the main car park would be disruptive of car park space and safety of vehicles moving on and off site.

Those options were estimated to cost from $700,000 to $1.2 million and would probably be unrecoverable, he said.

The option of a removable building, or one which could be dismantled, of about 250sq m to be sited in the council's lower car park would be the least disruptive, allow for safe vehicle movement and have some recoverable cost.

The indicative cost, excluding fees and compliance costs, would be about $400,000. Alternative car parking space could be rented close by, Mr Martin said.

Plans by the architect show the space being used as the council chamber and meeting room.

Mr Martin recommended the council give staff further direction as to their preferences for managing space demands in the three to five-year timeframe.