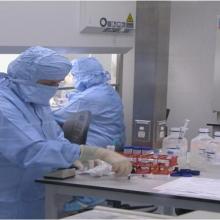 Photo from ODT files
An international charitable fund created by Bill Gates, one of the world's wealthiest men, has given University of Otago researchers $439,000 to undertake typhoid research in Tanzania.

And many infants later died, but there was ``considerable uncertainty'' about how many patients developed complications and died, especially in African countries, Prof Crump said.

Clarifying the death rate was crucial.

``This is really the final step before the World Health Organisation makes policy decisions and countries start to do things.''

The death toll arising from some other diseases affecting infants, including those caused by rotavirus, was more clearly known.

And gaining more accurate ``burden of disease'' information was needed for countries to ``weigh whether to invest in typhoid control and prevention'', compared with other diseases.

New typhoid conjugate vaccines were ``on the horizon'', that provided longer-lasting protection against typhoid fever, and from a younger age.

But policy-makers needed information to decide how typhoid vaccines should be deployed.

Over the past 20 years ``great progress'' had been made in understanding how many typhoid fever illnesses occurred each year in various places.

Prof Crump and colleagues have studied typhoid and other causes of fever in northern Tanzania for more than a decade, and more work was needed to ``support decisions'' about preventive measures, including vaccines, he said.