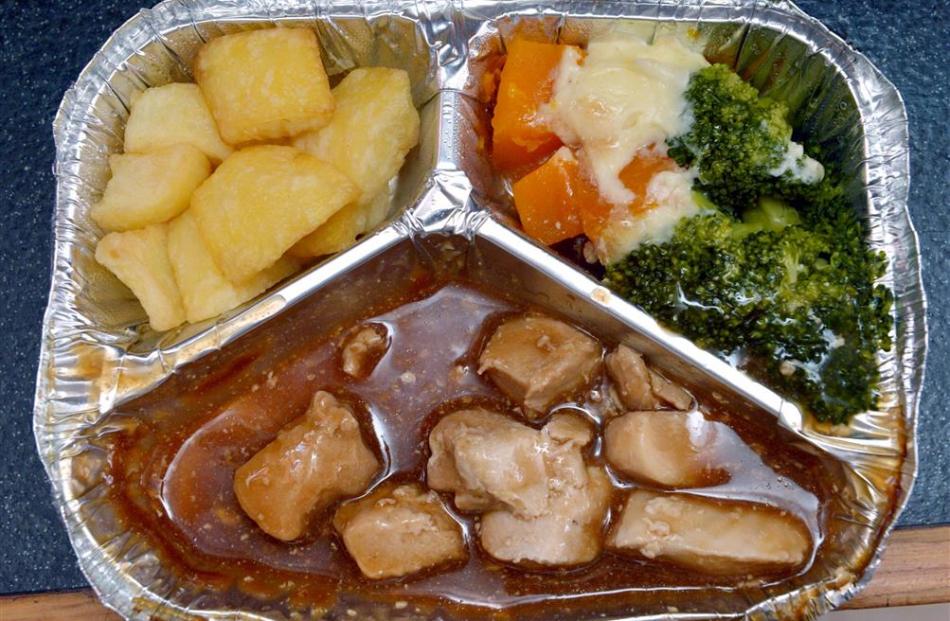 A Meals on Wheels dinner delivered in Dunedin on Monday. Photo by Gerard O'Brien.

Meals on Wheels cancellations are four times higher than the Southern District Health Board has previously disclosed.

The scheme to truck frozen meals from Auckland and Tauranga to the South has prompted cancellations, complaints and public criticism.

New information released by the board shows 44 people had cancelled the service since January 18.

Of those, 43 were in Dunedin, and one in Invercargill.

"This will be the subject of further discussion with Compass,'' chief executive Carole Heatly said in a statement yesterday.

A spokeswoman yesterday did not have a total figure for Meals on Wheels recipients in Dunedin.

Earlier this week, the board said there were 250 recipients in Dunedin and Invercargill, but it was unclear whether this included cancellations.

A specially convened meeting in Dunedin with senior managers from Compass to discuss the problems yesterday was "productive'', Ms Heatly said.

"They will be listening to Meals on Wheels clients and will be contacting all clients who have cancelled to find out why and how they can improve.''

Compass said in a statement a wide range of people tasted the new meals, both before and after they were introduced to recipients.

"Our enjoyment of food can be affected by lots of things and we must be careful not to create a situation where people don't want to eat a meal before they even receive it.''

Grey Power has taken issue with a claim it gave good feedback to the meals in a taste-testing session held last year.

In a statement, Ms Heatly said Grey Power and others gave "positive feedback'' after the sessions.

Grey Power Otago president Jo Millar said this was incorrect, and she believed the situation was misrepresented.

Mrs Millar said the test meals were not good, and the group was told there was an issue with the oven.

"You cannot give an honest evaluation of a meal that they're apologising they can't cook properly. It looked disgusting. The sauces were quite watery looking and we were told they were having trouble working the oven at the hospital.

"We were concerned at the way it was coming out, and we expressed those concerns.''

Mrs Millar believes the scheme requires an urgent rethink, as the health of older people could be compromised.

Asked to respond to Mrs Millar's concerns, the health board spokeswoman said Compass told the board the feedback was positive.

In response, a Compass spokeswoman said feedback from the sessions last year had been "generally positive''.

"It would be rare to get 100% approval for every meal,'' the Compass spokeswoman said.