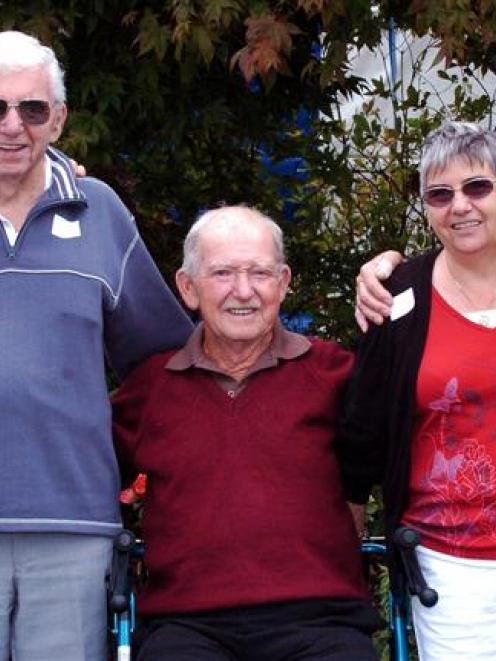 More than 100 members of the Cleveland family travelled from throughout the world - some from as far away as Egypt, England and Scotland - to attend a family gathering at the Saddle Hill home of Les Cleveland (79).

Among them were the five surviving siblings of seven children born to Agnes and Bernard Cleveland - brothers Les, Bernie (82), Ian (81), Doug (77) and sister Sherwyn (64).

It was Agnes Cleveland who, on her death bed, called her children into the room and made them promise to set aside one day each year for each other, Les Cleveland said.

Originally from Southland, she and her husband moved to Dunedin not long before her death, aged just 45, in 1953.

The siblings began their family tradition, dubbed the Cleveland Picnic, the following year.

It has continued on the first Sunday in February every year since, with the siblings and their extended families gathering and putting aside time to talk, have fun and pass on the values of the older generation to the younger members of the family, he said.

However, with two of Mrs Cleveland's seven children - brothers Eric and Edward - having died, and age catching up on the rest of the group, it had been decided yesterday's event would be the last formal gathering, Mr Cleveland said.

"It wasn't going to be long before the reason for having it was gone . . . The promise we made, we feel has been kept," he said.

Agnes Cleveland had inherited her values from her mother, Elizabeth Knight, who was the "matriarch" of the two families, Mr Cleveland said.

"She [Elizabeth Knight] was always at your birthday with a present and encouraging words, to live good, clean upright lives and help those in need."

Agnes' seven children were born in "really tough" times, but were taught to love and respect each other and value the family unit, he said.

The Cleveland Picnic was her way of ensuring that was protected after her death, Mr Cleveland said.

"This gives us the focal point we need for family life . . . It's been a wonderful thing."

The decision to end the annual gathering was agreed by all the siblings, but meant this year's event was particularly emotional - especially when a book on the family's history was handed out as a keepsake for younger family members, he said.

Many of the youngest children were unsure of the history behind the gathering, but it was hoped the book would serve as a permanent reminder, he said.

"There was a lot of feeling about it being the last picnic. It was quite moving really, that we then realised and were pleased we had actually kept our promise to her.

"A few tears were flowing."

Despite the sense of sadness, Mr Cleveland said smaller family gatherings would continue where possible in Dunedin.

"We are a very close family and we are the best of pals," he said.