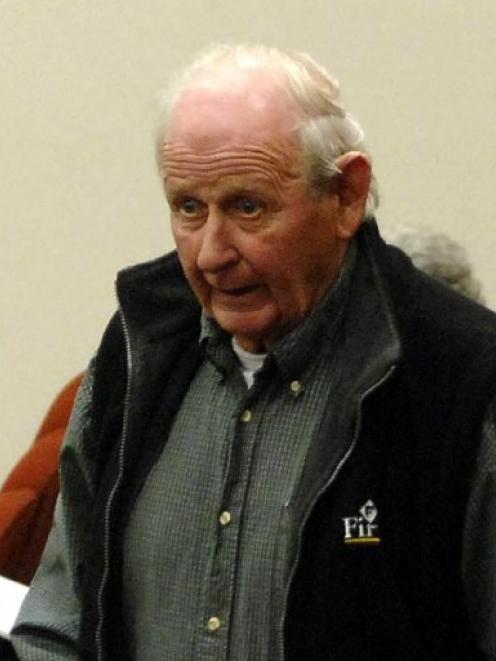 Frank Hocken
A company which planted 280,000 Douglas firs on the Maungatua Range near Mosgiel without a resource consent is to pay a $60,000 fine.

The 190ha of pine trees were planted by Twizel man Frank Hocken's company, Grants Motels Ltd, across a landscape conservation area on his land at the southern tip of the Maungatua Range.

The fine comes on top of a $135,000 bond being held to ensure the removal of any remaining trees.

After the company ignored the Dunedin City Council's advice a consent was required, the council took it to the Environment Court in 2013 for breaching the Resource Management Act.

Counsel for the DCC Allie Cunninghame told Judge Dwyer the trees were planted for what must have been financial reasons in the knowledge a resource consent was required.

He should consider that deliberateness in his sentence, as well as the scale of the planting, the potential for damage and the conduct of the defendant.

The council sought a fine of $63,000, as it could not take into account the unconsented planting of another 40,000 Corsican pines, now removed, as it had not had the resources to prosecute on those trees separately.

She said the council brought the matter to court to send a clear message to the public the environment was to be protected and a resource consent must be obtained before certain activities were carried out.

People should not expect that going ahead with something without having a consent would be ignored or rubber-stamped later.

''That message could be achieved by a conviction and a fine.''

Mr Hocken's lawyer, Chris Timbs, said his client's actions were not wilfully deliberate, but reckless ''at the highest end''.

His client had since been co-operative in agreeing to the subsequent bond and enforcement orders and genuine in endeavours to put things right and should not be fined on top of the other significant costs he had already paid.

No damage had actually been done, because the trees had not had the chance to seed before they were removed and the company should get some credit for also clearing gorse and broom from the area during the tree-planting process.

But Judge Dwyer said he considered the matter serious.

The apparent deliberateness and scale of the offending, the sensitivity of the environment and the high probability the trees would have had ongoing adverse effects on the land and through wilding in the future made the offending significant.

He convicted the company and from a starting point of $100,000 reduced the fine to $60,000 for the company's early guilty plea, removal of the offending trees - though he noted the removal was not properly done initially hence the bond on ongoing work - and putting up the bond.

He noted it had also been a costly exercise for the council, which had spent $41,000 on the case to date. Mr Hocken declined to comment after the sentencing.

Council services and development general manager Nicola Pinfold said the council was satisfied with the fine.

A penalty of this size was significant when considered in a national context, she said.

''It sends a clear message that undertaking unlawful activities comes with the risk of significant consequences.

''This landowner was very critical of the DCC, but the decision shows we were correct in taking the action we have and that we dealt with this matter appropriately.''