The data, initially released to student magazine Critic, showed 89,660 animals were used in research in the five years until the end of 2016.

The number of animals used and euthanised was generally trending downwards over the five years; 17,347 animals were euthanised in 2012 compared with 10,280 last year.

Most of the animals were mice and rats, followed by fish, amphibians and sheep.

Dogs and cats were used as part of the research, but none were euthanised. 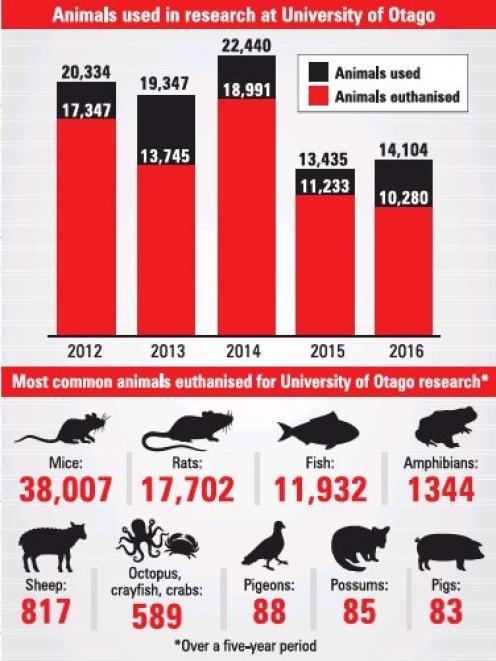 Otago University stood by the importance of using animals in research and the need for its new $50million animal research facility despite animal use dropping off.

The Otago Student Animal Legal Defence Fund says the university should be more transparent about its use of animals and questioned whether the research carried out at Otago always warranted the suffering animals went through.

Research and enterprise deputy vice-chancellor Prof Richard Blaikie highlighted what he called the great medical gains made from animal-based research.

``Research involving animals has played a vital part in nearly every medical breakthrough in the past few decades and has helped saved hundreds of millions of lives worldwide.

It was also vital for achieving many of New Zealand's key goals - for example environmental protection required understanding the the behaviours and biology of our native species,
Prof Blaikie said.

Managing and controlling introduced pests, such as possums, required using those species in research to design methods for managing their populations.

Stopping or phasing out use of animals would stop valuable research from going ahead.

``Phasing out animal-based research when no viable alternatives are available would mean that such important research would not be undertaken, and benefits not achieved.''

When research involved animals the ``wider benefit'' always had to be articulated to its animal ethics committees.

The university met stringent animal welfare regulations and treated animals with respect and the highest standards of care.

``We also fully stand by the principles of the 3 Rs - reduction, refinement and replacement of animal-based research and teaching, wherever workable.''

He stood by the need for $50million animal research facility despite the decline in animal use.

``The research support facility will future-proof Otago's status as a world-class leading scientific institution with an international reputation for excellence, by providing the foundations for ongoing biological and medical research and education regarding important questions and issues.''

Animal defence fund president Oska Rego said it was ``disappointing'' the university was continuing to use animals at such high rates.

The group was most concerned over the secrecy around the use of animals and wanted the university to be more open about what animals were used for and how they were treated, Mr Rego said.

``We would like to think if the university is confident in what it is doing and the animal testing it is undertaking is for a good purpose then it would be a bit more open about that.''

The decline in animal use was ``promising'', but without more context over the reasons for the decline he could not be sure it was not just a ``coincidence''.

The ``more obvious indication'' of the university's direction was the fact it was investing $50million in a new facility.

They would like to see more scrutiny over the benefits of using animals for research and teaching.

``The vast majority of animal use doesn't generate any benefit.''

He accepted sometimes there may not be alternatives.

But the numbers could be drastically reduced if the university proactively looked at alternatives. 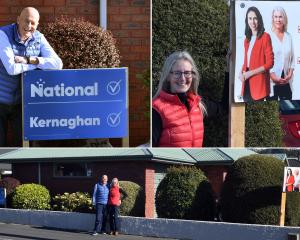 Peace and hope topics of conversation