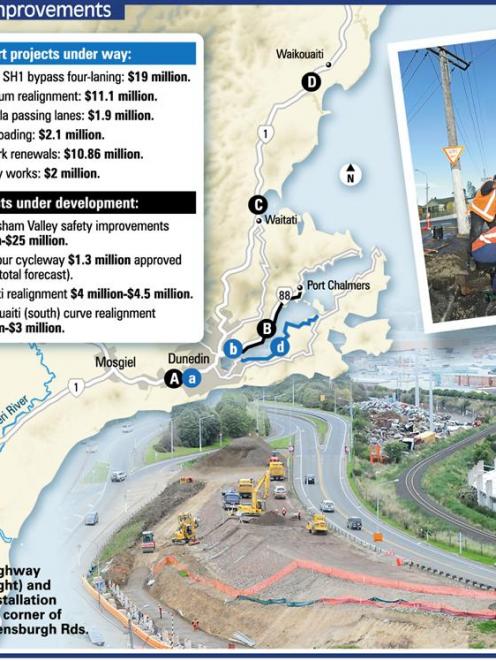 Dunedin motorists are set to benefit from a transport package of highway and roading network upgrades totalling about $85 million during the next five years.

The New Zealand Transport Agency has projects which total $34 million currently in the design and investigation stage, with $20 million worth of highway upgrades already on the go.

Meanwhile, the Dunedin City Council has budgeted $32 million for its transport operations this year.

NZTA projects team manager Simon Underwood said the main highway roadworks under way in the city were the $19 million four-laning project on State Highway 1 at Caversham and the $11.1 million SH88 realignment at the new stadium, which was being delivered by the Dunedin City Council.

Another $25 million of safety improvements are planned for SH1 through the Caversham Valley within the next two years, with other projects to realign troublesome stretches of SH1 at Waikouaiti and Waitati projected to begin within five years, he said.

The Caversham and SH88 realignment works were evidence of the "high-level of commitment to transport projects for Dunedin", Mr Underwood said.

About $32 million of transport operations have been budgeted by the council, with a "renewals" component - for upgrades, reseals, and the straightening of city roads, footpaths and carriageways - amounting to almost $11 million, he said.

"Resealing is a huge component of our transport programme. If you don't keep up with that, the cost of fixing problems down the track just explodes," he said.

"Unforeseen" events, often associated with extreme weather, such as floods, slips and high rainfall, could have a major effect on the councils roading assets, Mr Harrison said.

The council and NZTA had recently completed a technical audit, which reviewed the costs and budgets associated with transport operations and roading maintenance.

"We want to make sure we are doing things within the right time [frames] and budgets."

The report is scheduled to be tabled to council committees within the next few weeks, Mr Harrison said.

The council's road maintenance spend on a per kilometre basis was "arguably" less than other cities of a comparable size, he said.

Conversely though, Dunedin did not have the traffic congestion, crash statistics and the population growth which other regions do, and this could have flow-on effects when decisions were made about funding for transport projects, Mr Harrison said.

From a DCC transport operations perspective, most of the priorities for the city's roading budget are focused on "fine-tuning the network we have already got".

A draft strategy from the Otago Regional Council's transport committee, which is out for public consultation until June 21, draws attention to a potential tightening of the fiscal purse for future transport projects during the next five years.

"The challenge is to find affordable ways to maintain our existing land transport network, while at the same time prudently containing costs and ensuring we provide for economic growth," ORC transport committee chairman Stephen Woodhead said.