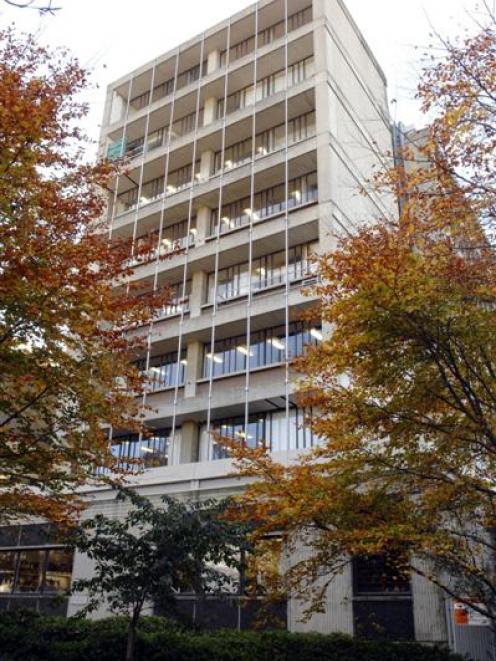 Science II, inner campus.
A crop of University of Otago buildings dating from the 1960s have been recommended for demolition in the university's 25-year campus master plan. Tertiary education reporter Allison Rudd finds out why the buildings have not stood the test of time, and what is being done to make sure future buildings do.

When the University of Otago was bursting at seams in the 1960s and needed a temporary, quick-fix solution, someone came up with a bright idea.

The university was short of land for expansion and short of money, so why not use a standard Ministry of Education design, put steel girders across the Water of Leith and place a building over the waterway?The project was approved, and the building went up.

It was known as the Interim Building; more than 40 years later, it is still there.

But its days could be numbered.

The demolition of that building and 10 others has been recommended in the university's master plan - the 25-year vision for development and growth released for public consumption last month.

Apart from two inherited from other organisations, most of the buildings were purpose-built for the university and designed either by Government architects or private firms.

Most are less than half a century old.

The university's most distinctive buildings - the ornately gracious, Gothic-style, clocktower building and geology block - are more than 120 years old and still in use.

So why haven't buildings less than half their age stood the test of time?The university declined to provide anyone to discuss this with the Otago Daily Times.

Local architects and engineers were also reluctant to talk.

As one succinctly put it, the university is about the only organisation still spending on construction projects and who would want to jeopardise their chances of obtaining work?

But there is an answer.

One or two buildings such as the Archway Lecture Theatres, the surveying building and Smithells gymnasium, are adequate but their locations could be put to better use.

The buildings from that era have two major problems - inflexible and cramped internal layouts and their construction methods.

At the launch of the master plan, vice-chancellor Prof Sir David Skegg said someone had once described the looming Science II building as "being designed by Stalin's personal architect".

No-one seems to know the author of the quote, but people identify with it.

Externally, the building is a concrete and glass box.

The master plan said that building and its neighbours in the science precinct were "from an architectural period that was not renowned for the subtlety of its aesthetics".

Internally, the building was "highly compartmentalised and inflexible in how it can be used" and "not appropriate for contemporary science facilities", the master plan said.

Concrete-panelled buildings from the 1960s and 1970s have another significant problem - concrete spalling.

At that time, panels were often constructed with the internal steel reinforcing rods too close to the surface.

That problem, combined with inadequate waterproofing and the corrosive effect of salt-laden air, led to the reinforcing rods rusting and panels splitting and crumbling from the inside out.

In extreme cases, sizeable chunks of concrete fall off.

Minor damage can be repaired, but, like several other owners of 1970s buildings in Dunedin, the university has had to reclad its worst-affected buildings.

It took more than four years and $1.4 million to reclad the 10-storey Richardson building (formally called the Hocken building) before the scaffolding was finally removed in 2006.

The recladding of the microbiology building was begun in 2008 and is almost completed.

The cost to date is just under $9 million, although that includes the installation of a new plant room and an upgrade of the ventilation system.

In the early 2000s, he researched virtually every one of them for a university lecture on the aesthetics of its architecture which he presented in 2003.

His lecture notes were given to the master plan consulting team and he also met members of the team and took them on a tour of the campus.

Long known as an opponent of demolishing buildings of historic importance, Mr Entwisle has no qualms about the thought 11 university buildings might go, although he would like to see the Ted McCoy-designed Archway lecture theatre retained if possible.

Collectively, the academic buildings were "bloody awful to look at as well as dysfunctional", he said.

"It is difficult to throw away real estate and the university is very brave to be considering this.

I'm not too troubled at losing most of these.

I am even prepared to take a deep breath and say the Archway lecture theatres might have to go."

Relating the story of the construction of the Interim Building over the Leith, Mr Entwisle said there was much concern at the time about the inappropriateness of the building's placement and he believed there would be much support for its removal.

The master plan recommends the demolition of two or possibly all three of the health research buildings on the corner of Great King and Frederick Sts.

Mr Entwisle said he was not surprised about that.

During his research, he discovered the Adams Building was built to exactly the same specifications as the Cargill House government office building.

"It might have been a cost saving to use the same design, but I'm told you can't actually fit a full-sized laboratory table in there."

Mr Entwisle had no kind words at all about the science buildings, describing them in his lecture as "a dreary, utilitarian affair which now resembles nothing so much as one of those north-of-Britain housing estates best remembered for their crime and squalor".

He said this week he was also pleased the university had decided future buildings should be five storeys high or fewer.

"They have finally got away from the idea of high-rises such as Unicol [residential college], the science buildings or the Richardson building. I support that. It is a shift in the right direction."