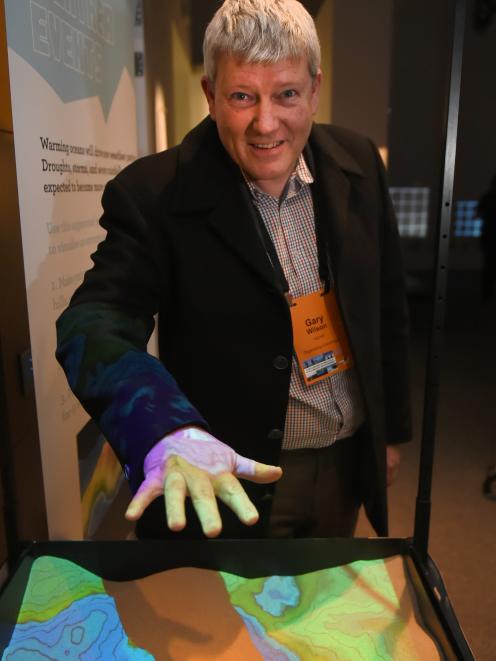 Prof Gary Wilson with an interactive display at Otago Museum depicting warming oceans. PHOTO: GREGOR RICHARDSON
Too little data is being gathered in the Antarctic about potentially catastrophic effects of climate change, but New Zealand is taking a leading role in the work that is being done, a leading researcher says.

"What scares me is we are not generating enough knowledge to be ahead of the game,'' Prof Gary Wilson said yesterday.

The conference has attracted more than 150 scientists to Dunedin, including delegates from the United States, Korea and Australia.

Prof Wilson will speak about research at Cape Adare, a key observation point because it is on the edge of the continent and is closely connected to the Southern Ocean.

"We don't have enough data to tell us things are changing [at Cape Adare], but it's the right place to go.

"Antarctica is at the coalface of climate change. It will have global implications.

"New Zealand is leading the effort in a number of important spaces in respect of Antarctic research.''

Climate change was causing ice-shelf disintegration in the Antarctic, but "the jury's out'' on how bad it would get.

It depended on the rate of increase of global emissions, but the level at which a tipping point might occur was unknown.

"There is hope that if we keep at this level [of emissions] we might not have [catastrophic effects].''

"But if we keep heading off at unrestricted emission levels, then the future does look bleak.

"What we better find out is how big this impact is going to be, and how fast,'' he said.

Prof Wilson will give a free public talk at 6pm today at the Hutton Theatre with Prof Christina Hulbe and Prof Craig Cary about their research.