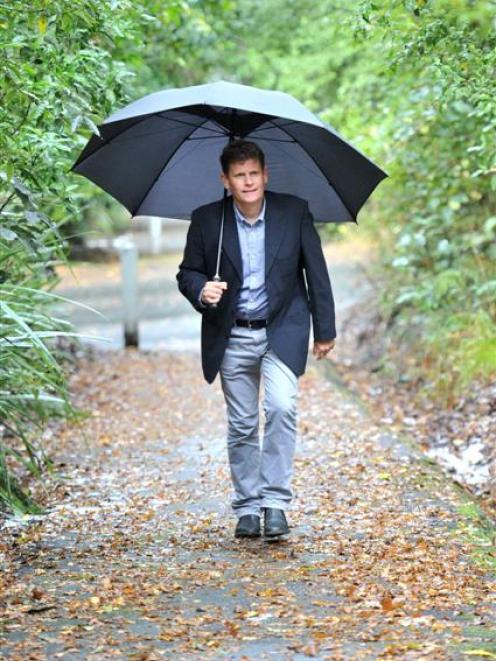 Prof John Crump, co-director of the University of Otago Centre for International Health, is working to combat infections causing non-malarial fevers in developing countries. Photo by Linda Robertson.
Many people living in poverty in developing countries are often forgotten by the wider world, as are their diseases.

But Prof John Crump, an award-winning researcher and co-director of the University of Otago's Centre for International Health, wants to help change that.

Prof Crump is investigating the crucial mysteries of non-malarial fevers.

Many of these fevers go undiagnosed and untreated, and many of them are ''zoonoses'', diseases infecting humans, but which arise from animals, he points out.

''Headline-grabbing outbreak-prone infectious diseases, such as Ebola, SARS, and pandemic influenza'' were all zoonotic infections, sparked at ''the interface of humans and animals often with an element of environmental change''.

But endemic zoonoses, such as leptospirosis and non-typhoidal salmonella, ''sicken large numbers of people all of the time yet rarely rise into the consciousness of most of us'', he points out.

And Prof Crump is well aware of the saying that ''the uncounted count for nothing'' and understands the heavy toll of less heavily publicised infections.

And he explains that decisions about resources for health were increasingly made based on estimates of burden of disease: the extent of illness, disability, and death caused by a particular condition.

In a recent feature, an international journal, Veterinary Record, starkly highlights the role of poverty and neglect when it comes to animal-borne infectious diseases in the developing world.

''Consequently, zoonotic diseases of impoverished communities continue to be overlooked in global disease control priorities, and the cycle of neglect is perpetuated by the lack of reliable data on incidence and impact,'' the article said.

Prof Crump is one of the authors of the feature, which also highlights the need to undertake research into the ''practical implementation and evaluation'' of disease-control programmes that reduced transmission in animal populations.

By controlling such diseases at their source, their ''impacts on human health, animal health and livelihoods'' could be reduced.

Recently a foundation established by the world's richest man has given about $320,000 to help clarify the human toll of salmonella disease, which kills many infant children in sub-Saharan Africa.

The Bill and Melinda Gates Foundation provided the money and the Otago centre will co-ordinate international efforts to clarify the extent of the ''disease burden'' involving typhoidal and non-typhoidal salmonella disease in Africa.

The project includes support for collating and publishing data on the illness, disability, and death caused in Africa by a group of bacteria called non-typhoidal salmonella.

Prof Crump said recently that it was ''shocking'' that an accurate estimate was not already available.

Salmonella disease killed about 500,000 people, many of them infants, each year, mostly in sub-Saharan Africa.

Despite its enormous toll, non-typhoidal salmonella had ''fallen through the cracks'' in global burden of disease estimates, and there was no official estimate of ''the number of salmonella sepsis illnesses and deaths''.

''I got interested in zoonoses when studying the problem of malaria overdiagnosis among patients with fever in northern Tanzania.

''We found that while more than 60% of patients hospitalised with fever received a clinical diagnosis of malaria, fewer than 2% actually had it.

''By contrast, bacterial zoonoses, such as leptospirosis and Q fever, were never considered by clinicians but collectively were the cause of illness for more than a quarter of patients admitted with fever. ''

''Animals are the source of well over half of known and emerging infections of humans,'' he said.

Prof Crump's own early past was interwoven with livestock.

Born in Oamaru, he grew up on a mixed livestock and cropping farm in Marlborough.

And he reflects that primary school studies were at Havelock School in Marlborough which has ''at least two prominent scientist alumni: Lord Ernest Rutherford and Dr William Pickering''.

He walks to and from work each day ''which I thoroughly enjoy'' and he is also a keen swimmer.

In their spare time, he and his wife, Jen, focused on ensuring their four boys were ''as tired as possible'' by evening, through any ''active pursuit'' available, including walking, cycling and swimming.

Given his strong interest in non-malarial fevers, it is hardly surprising that Prof Crump is also a champion of ''One Health''.

This is a co-ordinated approach to tackling both human and animal health issues in a more efficient and integrated way.

Better animal management practices and simple interventions can reduce the burden of zoonoses for many people living in developing countries, where they may be living in very close proximity with their farm animals.

And improving the health of livestock not only reduced the chances of humans being infected by animal-borne diseases, but also provided more food and sustenance for poor families.

Prof Crump's research is focused on Myanmar and Tanzania while his colleague and Otago centre co-director Prof Philip Hill works extensively in Indonesia and Gambia.

And One Health Aotearoa, a research collaboration led by Massey University and the University of Otago, had also more recently been developed.

Based on the One Health concept, this collaboration has focused on infectious diseases and brought together medical and veterinary researchers from throughout the country, many of them well-known internationally.

And the Otago centre's work was based on ''building and sustaining strong collaborative partnerships'' with organisations and scientists in low-resource areas.

And he would like to see New Zealand take more of a leadership role in advancing such initiatives abroad.

New Zealand's ''experience and success with controlling zoonotic diseases'', combined with its ''track record of being a good global citizen'' meant that it was well placed to work with other countries to ''tackle problems involving human, animal, and environmental health''.

Proudest achievement (personal life): Having a wife (Jen, from Canada) and four kids (all boys) who willingly tolerate my travel and work schedule.

THE CHALLENGE
APPLYING ''ONE HEALTH'' PRINCIPLES TO IMPROVE HUMAN AND ANIMAL HEALTH IN RESOURCE-POOR COUNTRIES, INCLUDING IN AFRICA.

Diagnosing, managing, and preventing infectiousdiseases in low-resource areas. I am particularly interested in theclinical problem of the patient who presents with fever but does nothave malaria.

Infectious diseases remain leading causes of illness and death in developing countries. For poor farmers in low-resource areas, infections from animals can not only sicken them or their family members, but also have important impacts on livestock fertility, productivity, growth, and survival causing a ''double impact'', exacerbating poverty.