Anthony Kerr makes a splash off the Dunedin Wharf for Manu Comp 2021 on Saturday. PHOTO: LINDA ROBERTSON
Splash, style and sound are all ingredients for the perfect manu.

They were the criteria put forward by the judges of Manu Comp 2021 on Saturday, a competition with a $1000 prize for whoever could make the biggest and most stylish splash diving off the Dunedin Wharf.

The event was run by Te Pae Mahuri, also known as the Dunedin Maori Youth Council, a group dedicated to uplifting the Maori language and wellbeing and running Maori events. 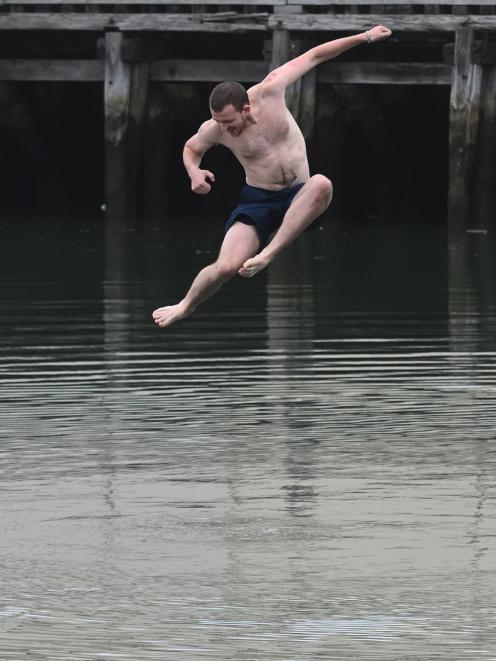 Anthony Kerr makes a splash off the Dunedin Wharf for Manu Comp 2021 on Saturday. PHOTO: LINDA ROBERTSON
The event was opened with a kapa haka before divers took to the wharf.

Organiser Jordyn Katipa-Martin said a manu, also known as a bomb, was a type of dive used to create a loud and large splash.

The competition event was a fun way of bringing people together with a distinct sense of Maori identity.

There was free food, live music and spot prizes.

There were about 60 people signed up to jump, but registration was open throughout the day and there would be plenty more who joined in, she said.

Divers were categorised by weight.

Jamin Falwasser (12) said he was no manu expert, but he had managed to pull off a pretty good splash.

He had ‘‘a little bit of slime’’ on him after getting out of the water, but it was not too cold.

Te Pae Mahuri originally planned for Covid-19 vaccinations to be held alongside the Manu Competition so that rangatahi (Māori youth) would be reassured by their peers and health experts about the importance of protecting our community against Covid-19 as they got their jabs.

However, this evolved into having an information tent due to the shift into the traffic light system.