Appeal for discussion on school building 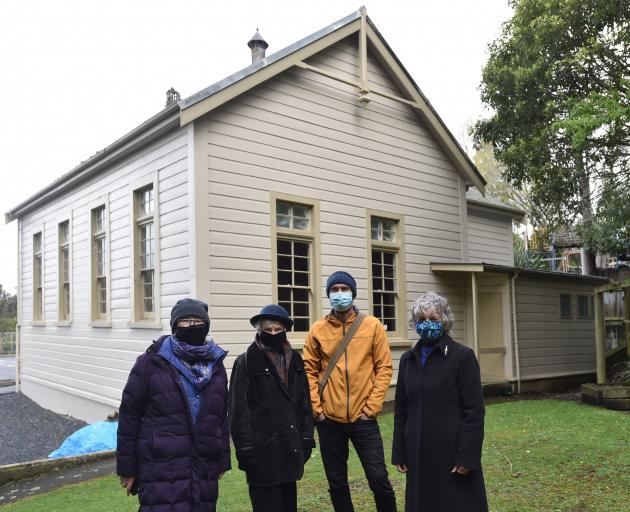 Protesting against the relocation or demolition of the historic Arthur Street School infants’ building are Southern Heritage Trust members (from left) Liz Angelo, Ann Barsby, Andrew Barsby and Joy Baker. PHOTO: GREGOR RICHARDSON
A Dunedin heritage advocate is worried there is still no word on the future of one of New Zealand’s oldest school buildings.

The Ministry of Education approved a $10.9million rebuild for Arthur Street School in 2019, but it is yet to confirm its plans for the school’s 134-year-old infants’ building, a category 2 heritage place.

Work is set to begin early next year.

This lack of confirmation has caused concern among members of the Southern Heritage Trust.

With the redevelopment beginning soon the public needed to be consulted immediately.

The building had ‘‘huge’’ historical significance and demolition or relocation ‘‘shouldn't even be considered’’.

She believed the Ministry of Education was disregarding its own 2016 historic management guidelines, which state the ministry would ensure places of heritage value would not be disposed of without fully exploring options for their reuse or alternative compatible uses.

It also recognised that the location was essential to the authenticity and integrity of some structures and they should remain on their original sites.

As one of the oldest schools in New Zealand, the site was just as important as the building, Mrs Barsby said.

The condition of the building was ‘‘not too bad’’ and the best course of action would be to conserve and continue using it.

However she had heard of ‘‘no attempt to reuse or reintegrate’’ the building into the new school.

Ministry of Education infrastructure and digital leader Scott Evans said it was “aware that some in the community have strong views on the best option for preserving the historic infant block at Arthur Street School’’.

‘‘Our goal is to find a solution for the building that recognises and protects its historical value into the future,’’ he said

Southern Heritage Trust and Heritage New Zealand had been involved in discussions from the early stages of the redevelopment planning, he said.

Relocation was identified as an option in those early planning phases as the building was ‘‘unable to be incorporated into a modern educational facility,’’ he said.

The school was originally located near Dowling St, then moved to the corner of Tennyson St and York Pl in 1864, before being moved to its current site in 1877.

As such, the ministry did not consider the location of the building essential to its authenticity and integrity as a cultural place, he said.

‘‘We continue to work with Heritage New Zealand on confirming a suitable option for the future of the building.’’

The ministry was tendering for a main contractor for the redevelopment with work expected to begin early next year.

Quote from Ministry of Education that the original scool was ‘‘unable to be incorporated into a modern educational facility.’’ Er why not? It's an essential part of Dunedin's history. A Heritage catagory 2 building. It would proabably cost more to move it than keep in situ and thus be the focus of the new school.